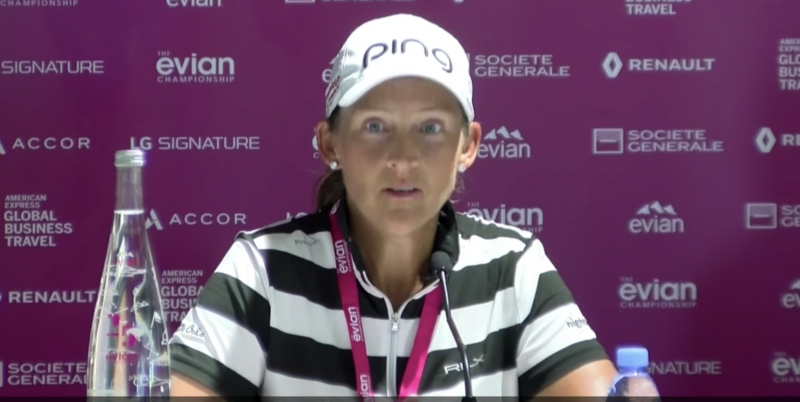 Angela Stanford joked that her mom Nan has really enjoyed seeing her daughter’s face plastered across picturesque Evian-les-Bains this week.

Stanford’s surprise victory in 2018 at age 40 was a defining moment in a career that had seen her embrace the fact that a major win may never happen for her.

“People say majors define careers. I was at a point where I was okay personally without it. That was hard. Took me years to get to that point,” said Stanford, who came close to major glory in 2003 when she lost in a playoff at the U.S. Women’s Open. “I just felt like I needed one just to kind of (give) affirmation for myself. I always believed I could win one. When you don't year after year after year you do kind of start to wonder. But I've loved every minute of it. Maybe it's been a blessing that it happened late because I've been able to enjoy it a lot. So I mean, I've just had a great time.”

Since her Evian victory, Stanford endured the first major injury of her career when she hurt her rib at last October’s TOTO Japan Classic. Sidelined until the Honda LPGA Thailand, Stanford has yet to break the top-25 at any event this season. She comes to Evian with low expectations but thinks that this return to the site of the biggest win of her 19-year LPGA career may be just the ticket to reviving her game.

“Honestly, it's been a very bad year. I'm at the lowest point I've ever been Money List-wise. Greens in regulation are awful. Putting is horrendous. Stat-wise, it's one of the worst years I've ever had,” said Stanford. “So that kind of helps me this week because my expectations have gone way down. I feel like I'm starting to hit the ball a little bit better. My putting, you know, I feel comfortable on these greens, so that's helpful. But I think it's been a good mix for me this week of, Okay, I'm finding some comfort here; expectations are low; mom is here; I have some friends coming. So I think that's going to be pretty helpful.”

WHAT YOU NEED TO KNOW ABOUT DEFENDING CHAMPION ANGELA STANFORD

CELEBRATION OF 25 YEARS IN EVIAN

On Wednesday at the Evian Resort Golf Club, Franck Riboud and Jacques Bungert led a champagne toast to 25 years of the Evian Championship. Then current players, joined by LPGA Commissioner Mike Whan, surprised the two men with the Evian water shower received each year by the winner on the 18th green.

“I am not a person who seeks attention, but I am really impressed with what we did, Jacques and the team,” Riboud said. “Every year we were thinking about the future. Today it is very fashionable to support ladies sports, with the Women’s World Cup soccer in France, but you go back 25 years and we had no one to help us.”

Celine Boutier returns to her home country with great expectations in her fourth start at The Evian Championship. After claiming the 2019 ISPS Handa Vic Open title and becoming a Rolex First-Time Winner, Boutier gained more confidence in herself and her skills, detecting an upward trend in her performance.

“I feel like it's definitely made me more confidence in my abilities,” said Boutier of her early-season win. “I feel like last year I played pretty okay all year round but I struggled to kind of have some top 10 finishes; and especially in majors I really wasn't playing very well. But getting that first win so early was definitely a relief… And then I felt like performing in majors was also another step for me, because I hadn't really had that good results before. So I feel like overall my game is kind of going upwards.”

Boutier had a strong performance at this year’s U.S. Women’s Open in Charleston, S.C., with a T5 finish, her best finish in a major, and hopes to keep the momentum going.

“I felt like being able to have a top five at the U.S. Open on one of the toughest courses kind of really helped me gain more confidence,” said Boutier, who is teeing off on Thursday at 1 p.m. with So Yeon Ryu and Yu Liu. “I’m trying to just focus on my game and not really just being in a major and having high scores or whatever it is.”

NOTABLE FIRST-ROUND GROUPINGS (all off No. 1)

The season-long Aon Risk Reward Challenge will highlight the world’s best professional golfers as they tackle the most strategically challenging holes across both the LPGA Tour and PGA TOUR schedules. The player from each Tour on top of the Aon leaderboard at the end of the regular season will receive a $1 million prize.

Heading into The Evian Championship, Lee-Anne Pace leads the standings at -0.818, with Hyo Joo Kim in second at -0.750 and Ariya Jutanugarn and Carlota Ciganda tied at -0.719. Brittany Altomare, Chella Choi and Jodi Ewart Shadoff all jumped into the top 10 following their performances at the Marathon Classic presented by Dana. Altomare and Choi carded two birdies on the par-5 17th hole, while Ewart Shadoff converted three birdies but bogeyed the hole in the second round.

The designated Aon Risk Reward Challenge hole at The Evian Championship is No. 14. This par 3 can be played from 225 yards to 150 yards depending on hole location and the tee being used. The challenge doesn’t stop with the tee shot, the green slopes against the terrain so a putt that looks like it breaks one way will go completely the opposite way. The players will have to rely on their practice rounds to play the correct break, different from what their eyes tell them, to avoid a big number.

The scoring system is identical on both the LPGA Tour and PGA TOUR, and players will take their best two scores from each Aon Risk Reward Challenge hole, with the winners having the best average score to par at the end of the season. Players must play a minimum of 40 rounds throughout the season. The Challenge runs across regular season tournaments (29 LPGA Tour; 36 PGA TOUR).