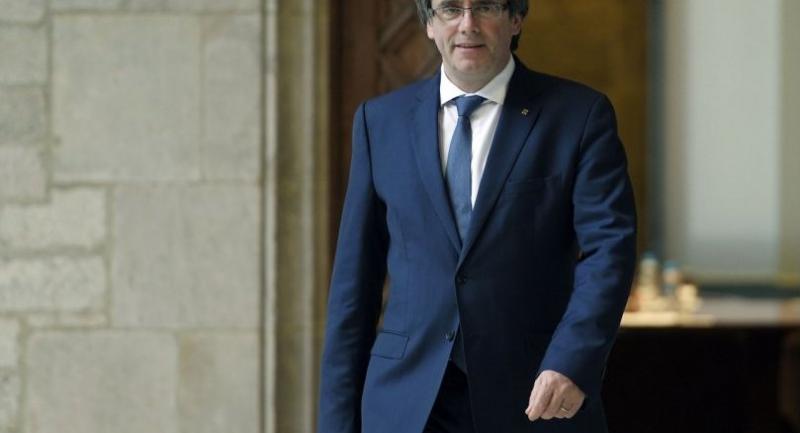 Catalan president Carles Puigdemont comes out to receive members of the Independent Commission for Mediation, Dialogue and Conciliation at the Catalan Government 'Generalitat' headquarters in Barcelona on October 6.//AFP

Barcelona - Will he declare independence for Catalonia? All eyes Tuesday will be on Carles Puigdemont, the separatist president of the region who could forge ahead with his childhood dream of splitting from Spain.

To the outside world, the 54-year-old former journalist with a thick mop of brown hair has become the face of the Catalan independence movement.

There is talk of the "Puigdemont effect" on companies moving their headquarters from the northeastern region as he threatens to declare independence as early as Tuesday.

"Puigdemont to jail," shout defenders of Spanish unity. He has retorted that he is not scared of arrest.

So where does the determination of this happily married father of two girls come from?

Independence 'in his blood'

In a biography published in 2016, Carles Porta, a journalist and friend of Puigdemont, describes him as an "honest and resilient" man, a dyed-in-the-wool partisan of independence.

"He has this quality (or this flaw): he's stubborn," Porta writes.

But a high-ranking critic who knows him but refused to be identified in order to speak freely, said he "does not have much preparation... to take on this big challenge", even though he has the independence of Catalonia "in his blood, as a unique driving force".

Puigdemont's destiny changed in January 2016 when he was selected to lead a coalition of separatist parties which had won a majority of seats in the regional parliament three months earlier, tasked with leading 7.5 million Catalans to independence.

Mayor of the city of Girona since 2001 and a lawmaker in the regional parliament, Puigdemont replaced Artur Mas as the Catalan president.

Mas, who had led the region since 2010, was deeply unpopular with far-left separatists for austerity measures he implemented in Catalonia during Spain's severe economic crisis.

They wanted him out, and so it was that Puigdemont took over, becoming the Spanish government's public enemy number one in the process.

He does share one thing in common with Prime Minister Mariano Rajoy though: Both suffered serious car accidents when they were younger.

Rajoy has his scars hidden under his beard, Puigdemont on his forehead, under his fringe.

Puigdemont was born in Amer, a small mountain village of about 2,200 people, on December 29, 1962, the second of eight siblings.

The son and grandson of bakers, he was just nine when he was sent to boarding school and "learnt to be a fighter", Porta says.

He was 13 when Spain's dictator Francisco Franco died in 1975.

Hugely attached to the Catalan language and passionate about history, the teenager would forever remember Franco's severe repression of his region.

In 1980, he joined Convergencia Democratica de Catalunya, the conservative and nationalist party which became the Catalan European Democratic Party in 2016.

Hired in 1982 as a sub-editor for the nationalist newspaper El Punt Avui, he rose up the ranks and became editor, combining journalism with activism.

At the time, pro-independence Catalans were still a minority.

In the summer of 1991, he travelled to the Republic of Slovenia, which had just declared independence from Yugoslavia after a banned referendum, followed by a brief armed conflict.

In the following years, he sought to widen support for independence, always by peaceful means, inspired by India's independence champion Mahatma Gandhi.

At ease with social media, he speaks French, English and Romanian -- his wife Marcela Topor comes from Romania.

He also founded a Catalan news agency and an English-language newspaper on the region, and headed up the Association of Municipalities for Independence, which brings together local entities to promote the right to self-determination.

"He has a great flair for showmanship and knows how to use the media," political analyst Anton Losada said.

Since 2012, Catalonia has been the scene of mass rallies asking for an independence referendum.

Some Catalans are thankful that he organised such a vote on October 1, even if it was banned by Madrid, repressed by police and not held according to official electoral standards.

More than 90 percent voted in favour of independence out of a turnout of just 43 percent.

Other Catalans, though, criticise a "democratic fraud" aimed at legitimising a declaration of independence, and accuse him of turning his back on half of the region that rejects breaking away from Spain.

For political analyst Joan Botella, "Puigdemont believes he has been called by destiny to take Catalans to the promised land, and his entourage is very unpredictable."

But "he doesn't at all appear to be a demented zealot as described by Madrid".//AFP