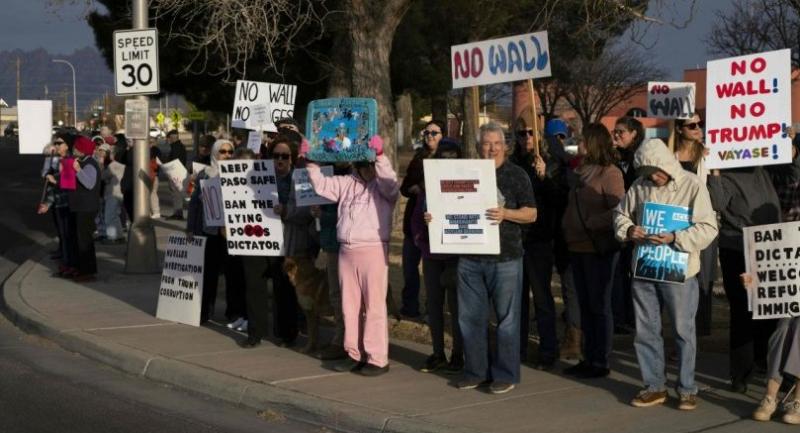 People hold up signs during a Presidents Day protest against the US president's national emergency declaration in downtown Las Cruces, New Mexico, on February 18.//AFP

San Francisco - Sixteen US states sued President Donald Trump's administration Monday over his decision to declare a national emergency to fund a wall on the southern border with Mexico, saying the move violated the constitution.

Trump announced the emergency Friday in order to bypass Congress, which approved only a quarter of the $5.6 billion he wanted for the wall in a spending bill.

But the lawsuit, filed in a federal court in California, said the president's order was contrary to the constitution's presentment and appropriations clauses, which outline legislative procedures and define Congress as the final arbiter of public funds, respectively.

The move had already been announced by Xavier Becerra, the attorney general of California, who said Sunday his state and others had legal standing because they risked losing moneys intended for military projects, disaster assistance and other purposes.

Critics, including several senators from Trump's Republican party, have warned that he has opened the door for future presidents to call on the act whenever they fail to get their way with Congress.

Should the states prevail, the case could work its way up to the Supreme Court, setting up a precedent-setting showdown on the separation of powers.

The states "bring this action to protect their residents, natural resources, and economic interests from President Donald J. Trump's flagrant disregard of fundamental separation of powers principles engrained in the United States Constitution," the complaint said.

It added that Trump had veered the country toward a "constitutional crisis of his own making."

"Congress has repeatedly rebuffed the president's insistence to fund a border wall, recently resulting in a record 35-day partial government shutdown over the border wall dispute," it said.

"After the government reopened, Congress approved, and the president signed into law, a $1.375 billion appropriation for fencing along the southern border, but Congress made clear that funding could not be used to build President Trump's proposed border wall."

The complaint also questioned Trump's categorization of illegal border crossings as a national emergency, saying data issued by his own administration refuted the notion.

"Customs and Border Protection ("CBP") data show that unlawful entries are near 45-year lows," it said.

"The State Department recognizes there is a lack of credible evidence that terrorists are using the southern border to enter the United States. Federal data confirm that immigrants are less likely to commit crimes than are native-born Americans."

The White House says the emergency order empowers it to pull around $6.6 billion from other sources, mostly already-allocated funds in the Defense Department budget.

But the lawsuit countered that tapping military funds would result in huge losses for the states' national guard units which would otherwise use the money for domestic drug interdiction and counter-drug activities as well as for law enforcement programs.

The complaint added that the Department of Homeland Security had violated the National Environmental Policy Act by failing to evaluate the environmental impact of the wall in California and New Mexico, saying species such as the endangered Mexican gray wolf, and the jaguar would be at risk.