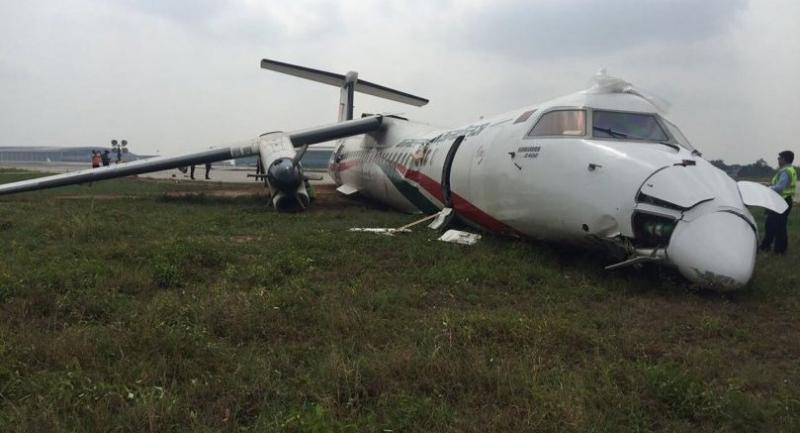 This handout picture taken and released by Myanmar Department of Civil Aviation on May 9, 2019 shows officials inspecting a Biman Bangladesh airlines passenger after it slid off a runway at Yangon International airport in Yangon//AFP.

Yangon, Myanmar - Eleven people were injured as a plane slid off a runway while landing at Yangon airport in Myanmar Wednesday, police said, as a freak storm hit the city.

Images on Facebook showed a crumpled Biman Bangladesh Airlines plane lying on the grass at the side of the runway.

An AFP photographer saw an injured woman being carried to an ambulance on a stretcher.

"One pilot, an air hostess and nine passengers were slightly injured," a police officer at the airport told AFP, asking not to be named, adding that the plane slid from the runway as it landed at 6.50pm (1220 GMT).

"It happened near Terminal 3 where it fell onto the cargo runway as it landed," he added, saying that the nose and both wings were damaged.

Yangon International Airport did not confirm the crash but announced that heavy rain had caused them to suspend "runway operations until further notice".

Other incoming flights were diverted to the capital Naypyidaw.

Thirty-one people were on board from Bangladesh, Myanmar, Canada, China, India, France and Switzerland.

Civilian airline accidents are relatively rare in Myanmar although there have been a series of crashes of military aircraft.

Bad weather caused a military plane to crash into the Andaman sea in 2017 with 122 people on board, one of the deadliest aviation accidents in the country's history.