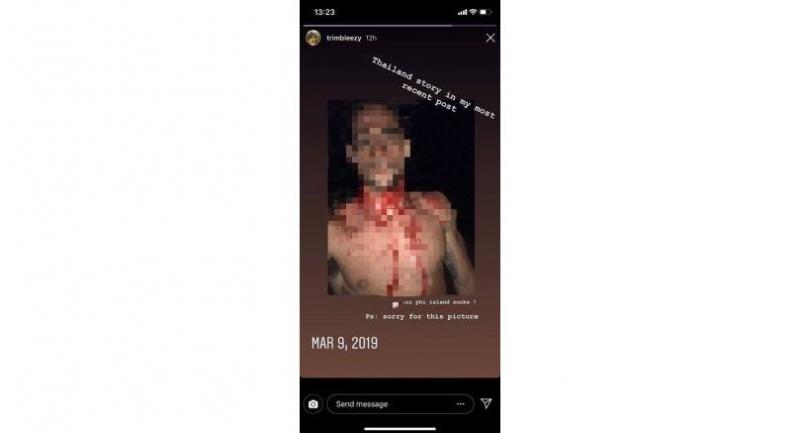 An American man has described how he was injured after being attacked by a gang of men on Koh Phi Phi.

Stephen Trimble said he was walking along the beach when he spotted a girl’s possessions being stolen while she was swimming.

When Trimble yelled at the man to stop, he left the girl’s bag and ran away, only to return moments later with three other men, who were armed with sticks and a kayak paddle.

Trimble said the men began to attack him, leaving him with injuries to his head, knee and back.

He said he reported the incident to the “super helpful” police. Trimble, a freelance photographer, posted about the incident on Instagram, which has almost 40,000 followers.

“Story time: a few nights ago on the beach in Phi Phi I stopped a local from stealing some girl’s purse on the beach. Things quickly went downhill from there! The girl was in the water and left her things on the sand. A perfect payday for a piece of shit low life thief preying on a tourist,” the post read.

“I see the Thai approach her belongings and pick up her purse, he rapidly walked into the shadows and began digging through her things. When I yell at him to stop and tell him that is not his bag, he throws it in the bushes and walks away,” he added.

“Two minutes later he returns with three friends all armed with large sticks... They came straight towards me and without hesitation began swinging on me. After about 15 strikes they take off down a dark alley at the end of the beach.

“At this point, I’m bleeding heavily from my head, arms and leg. I walk towards the nearest beach hostel to get some help, and come across a police on his moped. I explain to him what happened and he tells me to come to the station the next day at 10am to tell the police and they will look for the ones who attacked me. SUPER helpful.

“Anyways I got a few stitches in my head and a few more in my leg, also partially tore a ligament in my knee, and as you can see my back is a bit bruised and cut up. But I’m still alive and kicking! A few days of rest and I’ll keep on keeping on!”

Trimble warned other tourists about the risks of leaving belongings on a beach unattended. He also warned others to be careful at night.