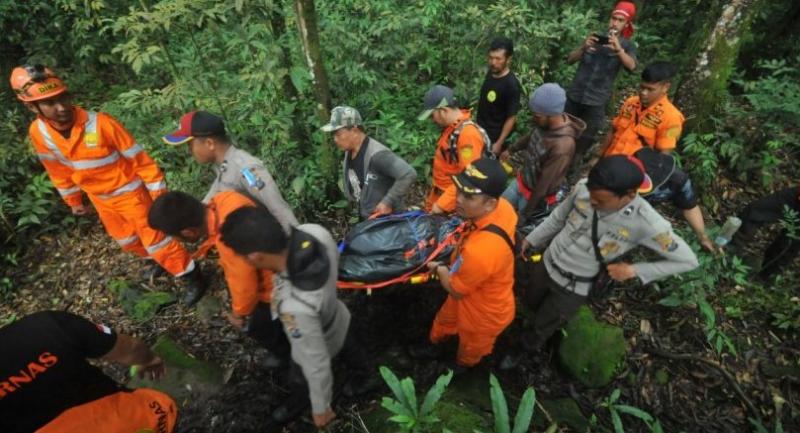 Indonesian search and rescue team members carry the body of German tourist Klaus Wolter, who went missing for a week after hiking up Mount Sibayak, an active volcano in North Sumatra province, in Sibolangit on June 30, 2017. // AFP PHOTO

SIBOLANGIT - A German tourist missing for over a week after setting off to hike an Indonesian volcano has been found dead, a search and rescue official said Friday.

Klaus Wolter, 48, who lives in Singapore, went missing last Wednesday after telling the hotel he was staying at that he wanted to trek up Mount Sibayak, an active volcano in North Sumatra province.

Scores of rescuers began scouring the volcano -- which last erupted over a hundred years ago -- the day after he set off, in a frantic search which lasted eight days, and at one point included a helicopter.

Wolter's body was found on Thursday near a waterfall several kilometres away from where he was last seen.

The rescue team took hours to retrieve the body due to the rough terrain, the head of the local search and rescue mission office, Budiawan, said.

"The wife of the victim has confirmed that it is her husband," Budiawan, who goes by one name, told AFP.

There have previously been fatalities among tourists climbing volcanoes in Indonesia.

In 2010, an Italian tourist was killed after falling into a ravine when climbing Mount Rinjani, the second-highest volcano in Indonesia.