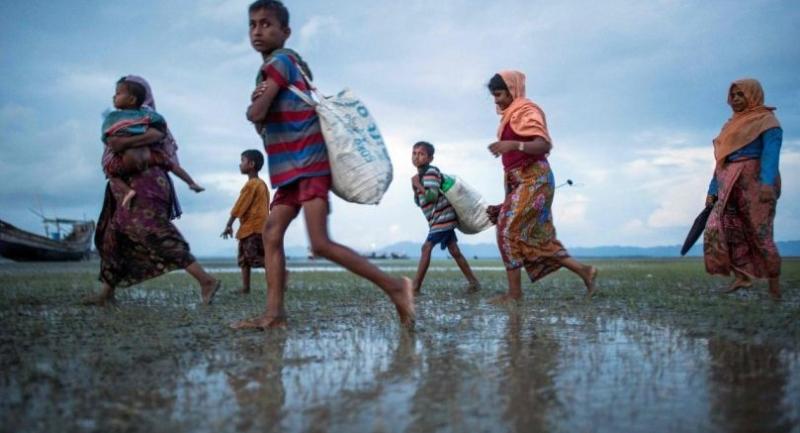 Rohingya Muslim refugee walks after crossing the border from Myanmar, on the Bangladeshi shores of the Naf river in Teknaf on September 29, 2017./AFP

YANGON - More than 2,000 Rohingya have massed along Myanmar's coast this week after trekking from inland villages in Rakhine state to join the refugee exodus to Bangladesh, state media reported Saturday.

The refugees follow more than half a million fellow Rohingya who have emptied out of northern Rakhine in a single month, fleeing an army crackdown and communal violence the UN says amounts to "ethnic cleansing".

The journey to Bangladesh is fraught with danger for the stateless Muslim minority, who have faced decades of systematic oppression in mainly Buddhist Myanmar.

After fleeing burning villages they say were set alight by soldiers and Buddhist mobs, more than one hundred Rohingya have drowned in the scramble to cross the Naf river that divides the two countries.

The latest boat capsize on Thursday has left some 60 feared dead, with 23 bodies -- mainly of children -- brought to shore as dozens more remain missing.

The crowds building up along Rakhine's coast hail from the same inland area -- Buthidaung township, west of the Mayu mountain range -- as many of those who perished in the boat tragedy.

"Starting on Tuesday, they left their region, claiming that they felt insecure to remain because they were now living in a sparsely populated area, as most of their relatives had left for Bangladesh," the state-run Global New Light of Myanmar reported.

More than half had gathered on a beach near Lay Yin Kwin village, the report said, with photos of women and children clustered together on the sand as security officers looked on.

It was not clear if or how they would complete the journey to Bangladesh, where the unprecedented influx of refugees has unfurled a separate humanitarian crisis as aid groups struggle to meet their vast needs.

The report said officials tried to assure the Rohingya of their safety in Myanmar but villagers said they "would still like to go to Bangladesh of their own accord."

The UN has previously reported that increasingly isolated Muslim communities in Rakhine are receiving regular threats from local Rakhine Buddhists to leave the area.

They have also been cut off from crucial humanitarian aid since August 25, when Rohingya militant raids triggered the military backlash that plunged the region into crisis.

Myanmar denies ethnic cleansing is under way and instead blames Rohingya militants for the violence, which has also displaced tens of thousands of ethnic Rakhine Buddhists and Hindus.

The unrest has inflamed already blistering religious tensions and fuelled a dizzying array of claims and counterclaims from different ethnic groups.

The Muslim Rohingya have been the target of especially acute loathing in Myanmar, where they are denied citizenship and are instead branded "Bengalis" -- or illegal migrants who do not belong in the Buddhist-majority country.