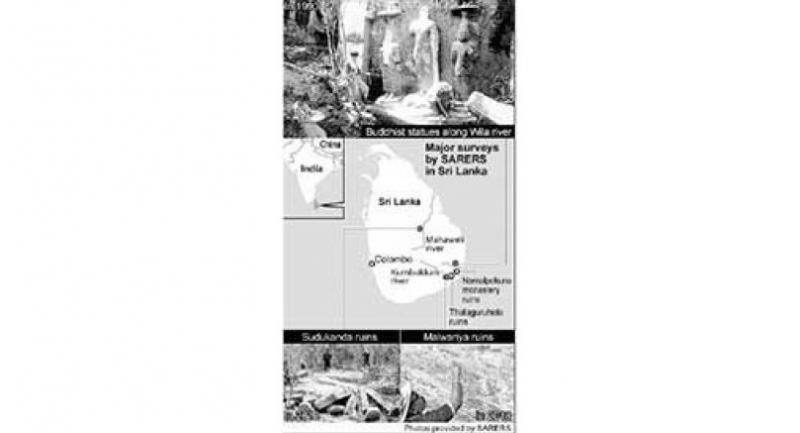 By The Island
Asia News Network

A group of Japanese volunteers has rediscovered the remains of an ancient pagoda temple atop a massive rock at the summit of Mount Thalaguruhela in Yala jungle.

Ancient script on the rock surface showed that the structure was built between the third century B.C. and the first century A.D, says the Asahi Shimbun newspaper reporting the rediscovery.

The AS report said: About a century ago, a British expedition stumbled upon the remains of an ancient pagoda in the jungle in what was then called Ceylon.

The members duly mapped the coordinates of the site, and then the matter seems to have been forgotten until now.

Japanese volunteers recently rediscovered the remains atop a massive rock at the summit of Mount Thalaguruhela in the country now called Sri Lanka.

The SARERS, along with is predecessor, has organized expeditions to 258 archaeological sites in Sri Lanka on 13 occasions that involved 103 members.

The group, comprised company employees, students and teachers, has made some intriguing discoveries.

The pagoda site on Mount Thalaguruhela, in the Yala National Park, were newly located in August by 10 SARERS members, who were joined by nine experts, including those from the Sri Lankan government’s Archeology Department.

The expedition also discovered rock art by the indigenous people at Malwariya, an archaeological site 20 kilometers away.

The dozens of line drawings in a white pigment had not been known to exist before.

Two decades of political instability that wracked Sri Lanka resulted in the destruction of many archaeological remains and looting of sites.

The SARERS, which was established in 2008 mainly by former members of Hosei University’s exploration society, volunteers its services under the slogan of "preserving mankind’s cultural heritage."

"Our goal is to explore previously unknown ruins and make them widely known," said Takashi Okamura, 70, leader of the group. "Someone has to do that."

Okamura was a university student when he studied a Sri Lankan archaeological site for the first time in 1969.

As all the costs cannot be covered only with membership fees and donations, expedition members must bear some of the research expenses.

Sodo Mori, 84, a former professor at Aichi Gakuin University and an expert on the history of Buddhism in Sri Lanka, called the Buddhist statues discovered along the Wila river "especially historic among other finds in the group’s long history of research."

SARERS members in 1985 discovered the Buddha and Bodhisattva figures carved on a rock during the time of Mahayana Buddhism, which was stamped out following a crackdown in the 12th century.

Theravada, a more conservative version of Buddhism, is currently practiced in Sri Lanka.

T.M.C. Bandara, a senior exploration official at the Sri Lankan Archeology Department, is appreciative of the group’s activities.

"Many archaeological sites have yet to be surveyed, but it is difficult for us to do the research alone in terms of costs and personnel," he said. "Having opportunities to work with Japanese volunteers is important for us."