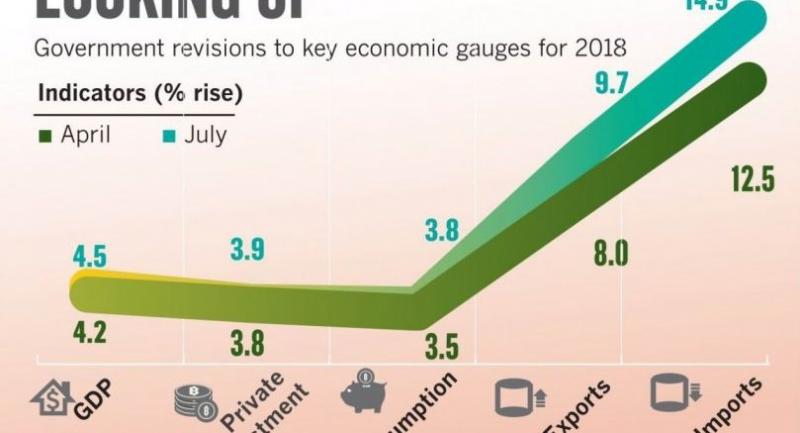 By  WICHIT CHAITRONG
THE NATION

SUSTAINED growth in exports headlines strong data that has prompted the Finance Ministry to raise its forecast for economic growth this year to 4.5 per cent, with a key index that points to increased confidence among manufacturers adding to the upbeat sentiment.

Kulaya Tantitemit, the Finance Ministry’s inspector-general, yesterday said that the ministry had revised its economic growth forecast from 4.2 per cent, with the 4.5 per cent estimate sitting midway in a range of 4.2 to 4.8 per cent.

After the economy grew 3.9 per cent last year, the momentum has been maintained with further expansion in exports, benefiting from the economic expansion in the country’s trading partners.

As a range of positive data comes in, a consensus in the financial markets is emerging for economic growth of more than 4 per cent for 2018.

Public spending in the 2018 fiscal year has also contributed to the continued growth in gross domestic product (GDP). The government put in place a mid-year supplementary budget worth Bt150 billion, Kulaya said.

Investment in infrastructure projects, the development of special economic zones and public-private partnership investments are expected to boost investor confidence and lead to more private investment this year, Kulaya said.

Household consumption is showing sign of continued expansion as the incomes of non-farm workers have increased in line with export growth.

Kulaya said farmers’ incomes had also started to pick up in recent months and government welfare spending is expected to boost consumption among these groups,

On the economic stability front, the Finance Ministry predicts the inflation rate will be 1.2 per cent this year, thank to higher oil prices.

The current account surplus remains high, estimated at US$44.3 billion – the equivalent of 8.8 per cent of GDP.

Downside risks include the unfolding trade war among major economies, including the United States, China, Europe, Canada and Mexico, and volatility in the global financial markets. These risks will need to be closely monitor, Kulaya said.

She said Thai Regional Economic Sentiment Index (RSI), which measures confidence in the next six months, suggests an upbeat mood is taking hold across the country - led by the Central, Eastern and Northeastern regions.

The index in July for the Central region stood at 91.3, supported by more investment, expansion of industrial production and more purchasing orders. Construction of new roads and expressways in the region also boosted confidence among business communities. The index for the Eastern region came in at 87.9, boosted by investment in the Eastern Economic Corridor (EEC) initiative and the tourism industry.

The index for the Northeast is 86.5, reflecting manufacturers’ optimism on the outlook for industrial production and new factories being set up in Kalasin, Bueng Kan and Surin provinces. Tourism also is expected to spur economic growth in the second half of the year.

The Western region is expected to gain from agricultural production, as the region has sufficient water supplies. The Southern part of the country expects to see more tourist arrivals in the peak season later this year.