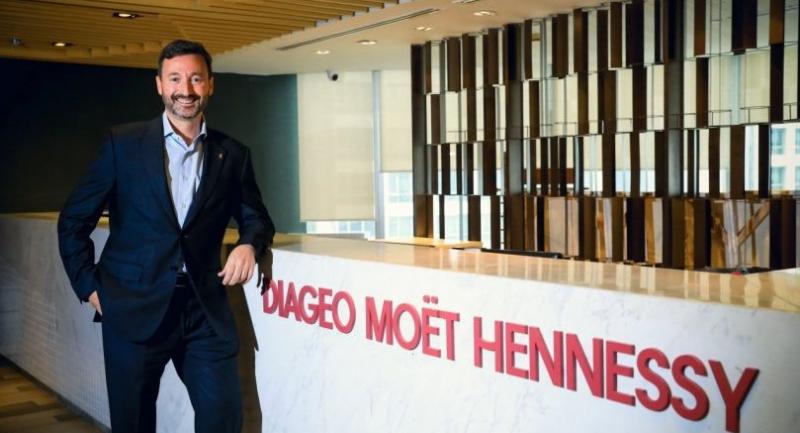 Ibeas says the alcohol market is expected to continue to slow down as a result of economic pressures and a global shift in consumption in which people are drinking “better, but not more”. As Thailand is no exception, he says, this creates an opportunity to promote premium drinks and experiment with innovation. Ibeas notes that Thai consumers are very keen to try new products and have embraced the cocktail culture.

“Our ambition for Diageo Moet Hennessy Thailand is to become the best performing, most trusted and respected consumer goods company in Thailand. To achieve this goal, DMHT promotes a culture of ‘Celebrating Life Every Day Everywhere by Drinking Better Not More’. This can be interpreted as seeking to be the best you can be at work, in society and in the communities where we operate,” Ibeas says.

He took over as managing director of DMHT at the start of last year. The Spaniard brought with him 19 years of broad functional and regional experience to his role at Diageo, where he is focusing on driving sustainable business growth for the company in Thailand and “delivering benefits to all stakeholders through clear strategies and DMHT innovations”, he says.

A graduate of Universidad Comercial de Deusto in Bilbao, Spain, and Stockholm University in the Swedish capital, Ibeas started his career in finance decision support and later took on finance leadership roles across Latin America and the Caribbean, the Andean region and in the UK.

He has also held global positions with Diageo’s treasury and group strategy teams and in 2014 moved to commercial roles in his native Spain. In recent years, he led the business on the Iberian peninsula, with responsibilities for Spain, Portugal and the Canaries.

Under his leadership, the business has returned to growth after many challenging years and is once again a key player in the whisky and gin categories. He was responsible for shaping the next phase of Diageo’s route-to-consumer in Iberia, more than doubling the company’s coverage and transforming the ways of working with its wholesale partners.

Ibeas has been described as a natural leader and is known for building and motivating highly engaged teams, transmitting to them his passion in working for DMHT. He is also an avid supporter of the local communities where the company works and was actively involved in sustainability and responsibility programmes such as Diageo Learning for Life, which was applied across the Iberian region.

In his spare time, Alberto enjoys travelling, music, sports and reading. He is married and is a proud father of three.

He says that, in trying to do the best he can at work, he wants to inspire his colleagues to develop innovations and new experiences in response to Thai consumers’ changing lifestyle. These changes are typified by Thais’ preferences for premium drinks enjoyed on more relaxed occasions.

“Diageo is the world’s biggest premium spirits company. Together with our joint venture partner in Thailand, LVMH, we have an unbeatable range of global iconic brands,” he says.

“We believe that despite the market difficulties and economic challenges, there are significant opportunities for us to offer exciting celebratory experiences to our consumers.”

“Some tangible examples are the launch of our limited edition Johnnie Walker White Walker and the Fire & Ice Malt Whiskies, all in partnership with globally acclaimed HBO series Game of Thrones. Also our beautiful and Japanese inspired Smirnoff ICE Umeshu, the launch of The Singleton Malt series (perfect to pair with spicy food), and many more brands that we will be introducing in the market in the months to come.

“Being the best in society and the communities inspires us to create a positive impact where we operate. As an example, we believe that alcohol can be part of balanced lifestyle, if and when people drink moderately.” He says the company has funded a number of programmes to educate people on the need to drink responsibly.

“Some examples of these programmes are DRINKiQ for alcohol education,” he says. “We have developed an e-learning platform, and are also using innovative VR technology for a consumer roadshow.

“For the Road Safety/Don’t Drink Drive campaign we worked with the police, and have programmes in partnership with UNITAR and UNESCAP.

“For the Smashed Theatre programme, this has been undertaken with the aim of preventing under-age consumption.

“A company that contributes to creating a better society, promoting a “drink better not more” culture, training Thai consumers to enjoy alcohol responsibly and also educating them when not to drink is the only option – for example, when driving of if you are under age – that’s what I want.

“I am also proud to be part of a company that promotes gender equality and diversity and inclusion at work; 51 per cent of our employees are women. This is also a company, that despite its size, is constantly hunting for opportunities to perform better. It is a company that is never satisfied and is always hungry for more.”

Ibeas says these characteristics of the company can be encapsulated in three points.

“We must maintain market leadership. Losing market share means that you are giving your size of the pie to someone else,” he says.

“We must create a better company, where our employees are super engaged. We must create a positive impact in our society, educating people about how alcohol can be part of a balanced lifestyle and how it can be consumed responsibly.”

Ibeas says the industry has had to contend with significant lifestyle changes on the part of consumers.

“But as a company we are very successful in delivering new products and experiences to accommodate these changes,” he says. “For example, we have seen a change from high tempo occasions, typified by loud music, to more relaxing settings and which are combined with food.

“We have developed experiences that continue to offer consumers the right drinks when they are enjoying these times.”

On the technology front, the changes sweeping through the industry and society are changing the way the company works, he says.

“The way employees work and interact with one another is being completely disrupted,” he says. “We now use technologies like Zoom so that any of our employees can videoconference with each other from anywhere in the world. We have Quip so that employees can work on a document from different locations in real time. We have moved from in-class learning to e-learning for employees with our Diageo Academy technology,” Ibeas says.

“As for outside the organisation, DMHT’s interactions are moving from traditional sources to digital platforms. This is not only about our brands. We have also developed digital initiatives to educate adults on how to drink responsibly, such as DRINKiQ e-learning and VR technology, to raise awareness on road safety,” he says.

He says the company has an exciting year ahead of it.

“On our unbeatable Super deluxe portfolio, we are introducing a JW Blue Label Year of the Pig edition, a Bangkok limited edition that will be sold in Thailand for a limited period, and a Ghost and Rare edition, which is a special Blue label edition made with whiskies from distilleries that are already closed,” he says.

“That means that the whisky cannot be made again, nor replicated. It’s an absolute jewel. We will also soon launch our Fire and Ice Malts in partnership with Game of Thrones. This is a collection of seven malts inspired by the Houses of the globally acclaimed Game of Thrones series. We will be bringing a very limited number of bottles into Thailand, we so suggest you rush to get yours.

“This year, and for the first time in Thailand, we will take our global World Class competition to several cities in Thailand. This is the best bartender competition in the world, where thousands of bartenders globally compete to be the best.

“We will have finalists from all corners of Thailand, who will then compete to be the Thai representative in the global final that will be celebrated in Glasgow in September. We will, also for the first time in Thailand, celebrate a cocktail festival in Bangkok at the same time as the Thai World Class final.”

He says that, from an innovation point of view, the company has launched Smirnoff ICE Umeshu, Johnnie Walker White Walker limited edition, and the Singleton Malts series.

“These launches were all very successfully executed,” he says. “The company will be launching two new products in the next couple of months, but we will keep that confidential for now.”