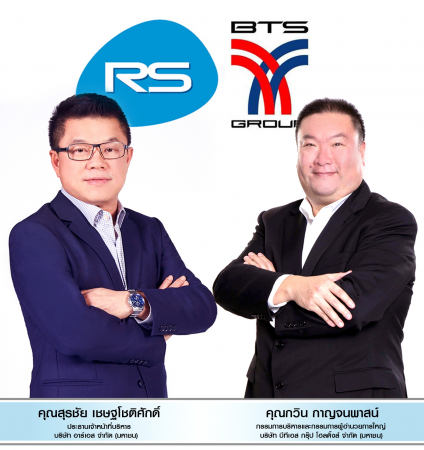 In the latest development, BTS Group Holdings Public Company Limited (BTS) has paid more than Bt1 billion for 68 million shares (7 per cent) in the RS Group.

The move is expected to generate multiple new business opportunities and provide a foundation for an expansion of commercial businesses through multi-platform commerce (MPC). New projects to increase the capacity for competition will also be launched as part of a push to enable RS Group to reach its aim of Bt10 billion in income.

Surachai Chetchotisak, the CEO of RS Public Co Ltd, sees this year as a very important and meaningful one for the firm, as it is marks a turning point for the company's 35-year-old business. As RS makes a transition towards commercial business, a new era under a new business model has begun, based on MPC and direct to consumer (D to C) principles, according to a company release on Tuesday.

The transition provides an opportunity to build upon the company's traditional strength in the music business and create new opportunities in the media business, said the release. For example, the company's Channel 8 has been turned into a platform that has been generating sustained income and growth for RS.

As part of its vision, RS continues to pursue growth spurts as well as long-term corporate strength. The company is open for building new alliances that can contribute to horizontal integration and increased opportunities for reaching new groups of customers.

The alliance with BTS, a leading provider of mass transit, brings with it the potential of its subsidiaries including VGI, a complete ecosystem of offline-to-online solutions with advertising, payment and logistics. With this synergistic strategy, the combined strengths of the two companies and the integration of customer databases will further buttress consumer confidence in effectively accessing goods and services, according to the release., and leading to RS reaching the Bt10 billion income level in 2022.

Kavin Kanjanapas, the CEO of BTS Group, said, “This strategic partnership will build and solidify business opportunities to both BTS and RS.”

BTS’s platforms comprise a travel platform and the VGI platform. The travel platform now serves over 1 million trips per day, and will see an expansion as the company’s mass transit rail lines are extended from the current 48.9 kilometres to 133.4km by 2021. VGI's platform spans advertising with media capacity of more than Bt12 billion, with Payment (in the form of the Rabbit Group) serving more than 18 million users and Logistics (through Kerry Express) which connects to more than 1.2 million consumers daily, said Kavin.

“Through RS's multi-platform commerce reaching to more than 1.2 million consumers reflecting in their annual sales of Bt2.1 billion, we believe that this investment will bring countless opportunities and enable both companies to leverage their core capabilities to capture greater market share.”

Added Surachai, “This investment by BTS represents a new dimension in alliance building between companies from different business sectors, aimed at creating new project opportunities for both parties and supporting the expansion towards multi-platform commerce to ensure a superior capability over its competitors and reach the stated income level goal more rapidly. RS remains committed to its mission of horizontal integration and horizontal growth, while keeping an open mind for new business partners in the future.”

The purchase of shares by the BTS Group Holdings Public Company Limited for the purpose of creating this business alliance has no effect on the company's management, or on the structure of Surachai Chetchotisak's shareholding. Surachai remains the company’s top shareholder, according to the release.