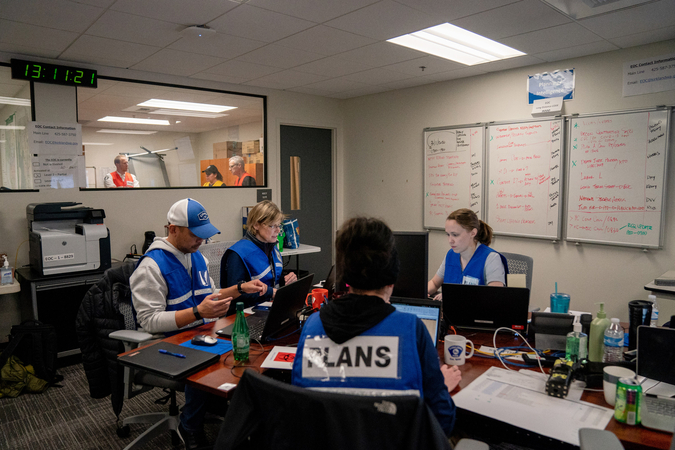 U.S. consumer sentiment fell slightly less than forecast in March amid stock market declines as Americans remained somewhat optimistic in their initial response to the coronavirus outbreak, though their outlooks signaled that they aren't likely to remain as upbeat.

The University of Michigan's preliminary sentiment index fell to 95.9 from 101 in February, according to data released Friday that slightly exceeded estimates in Bloomberg's survey of economists. The composition showed the future expectations index fell more steeply, dropping 6.8 points to 85.3, than current conditions, down 2.3 points to 112.5.

The survey conducted from Feb. 26 through late Wednesday evening captures a period that started with the virus beginning to spread across the country and culminated with the Dow Jones Industrial Average plunging into a bear market, the World Health Organization declaring a pandemic, and President Donald Trump restricting travel from Europe.

It doesn't reflect Thursday's stock-market plunge -- the worst since 1987 -- and the rapid shutdown of university campuses, public schools, major sports and entertainment venues over the last 24 hours.

"The initial response to the pandemic has not generated the type of economic panic among consumers that was present in the run-up to the Great Recession," Richard Curtin, director of the survey, said in a statement. "Nonetheless, the data suggest that additional declines in confidence are still likely to occur as the spread of the virus continues to accelerate."

The pullback snaps a six-month streak of gains that showed Americans had grown more upbeat as trade tensions with China eased. This month's first major sentiment report will be followed by a final reading March 27, reflecting a Feb. 26 to March 23 survey period, and the Conference Board's gauge on March 31. Bloomberg's Consumer Comfort Index this week posted a sixth-straight drop, the longest such stretch since 2015.

"If we look to the rest of the month of March you're going to see a combination of not just the expectations but the current economic conditions fall, and that will lead to significant pullback in the final reading," said Gregory Daco, an economist at Oxford Economics. "When you're going to start to see a real disruption to consumer sentiment is when people see their daily activities being influenced by the virus."

The most effective containment efforts, closures and isolation, also do the most damage to the economy and increase the chances that the pandemic will be followed by a recession that lasts longer than the virus, Curtin said.

"The best policy antidote would be immediate relief provided by multiple sources of cash transfers and debt forbearance," he wrote. "To avoid a recession, speed is more essential than targeting. Moreover, maintaining confidence in the effectiveness of economic policies is essential."

Still, the figures suggest early reactions to the outbreak reflect a perception that it will be a temporary event, according to Curtin's report. A majority still report being better off financially. Asked about future prospects, 37% expected gains versus 41% last month. Twenty-nine percent expected interest rates to decline, the most since February 2009.

Asked to explain their economic expectations, the virus was spontaneously mentioned by 38% of respondents versus 8% last month, and those mentioning the outbreak were more pessimistic. The survey found no significant difference in confidence in government economic policies between those who mentioned the virus and those who didn't.