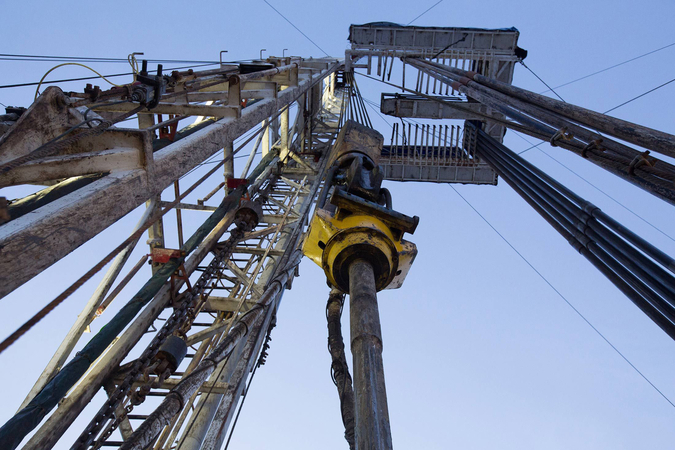 Stocks vaulted to big gains Thursday on word that Saudi Arabia and Russia may slash crude output by 10 million barrels a day. The cuts could chart a path toward restoring the hardest-hit sector of the economy, and the news came as markets were digesting bitter unemployment numbers.

The Dow Jones industrial average soared more than 500 points Thursday shortly after President Donald Trump told CNBC that Russia and Saudi Arabia had agreed to consider significant production cuts. Trump said he had spoken with Russian President Vladimir Putin and Saudi Crown Prince Mohammed bin Salman about the need to stabilize oil prices, which have fallen roughly 60 percent in the past month.

Energy stocks tempered initial gains but still got a 9% lift on the day, which was nearly three times better than the second-place finisher, utilities. Oil prices rocketed 25%, notching their best day ever. U.S. oil giants Chevron and ExxonMobil advanced 11% and 7.6%, respectively, and were the best Dow performers by far. Europe's Big Oil companies benefited too, with Royal Dutch Shell, BP and France's Total finishing strong.

In recent years, the energy sector has shrunk as a portion of the overall economy, losing ground to technology and health care. But its role as a huge employer and a producer of one of the most important commodities on the planet gives it a crucial role in the daily life of Americans.

"This glimmer of hope in oil prices is being fully embraced by the oil and stock markets," said John Kilduff of Again Capital. "But it's still a steep climb before any of this pans out in improved outlook for any of the markets."

The unemployment report vaporized 300 points from the Dow in 10 minutes, sending the blue chips into negative territory and launching stocks on another wild ride.

Two hours later came Trump's tweet with the prospect of oil relief through higher prices. The president finds himself in the awkward position of asking the Saudis to limit production in order to cut into the glut that has slashed oil prices. In the past, Trump has pressed the Saudis to pump more oil to safeguard lower prices at the fuel pump.

Diminished demand due to the economic slowdown caused by the coronavirus, coupled with Russia and Saudi Arabia and the U.S. pumping oil like mad, has flooded world markets and driven the commodity's price so low that almost no one can make a profit. Some experts say the world is pumping a surplus of 20 million barrels of oil per day with no place to put it.

On Twitter, Trump wrote: "Just spoke to my friend MBS (Crown Prince) of Saudi Arabia, who spoke with President Putin of Russia, & I expect & hope that they will be cutting back approximately 10 Million Barrels, and maybe substantially more which, if it happens, will be GREAT for the oil & gas industry!"

Energy's performance helped European stock markets post gains across the board. Britain's FTSE 100 edged up 0.5%, while the German DAX and the French CAC 40 moved up about 0.3%. The benchmark Stoxx 600 climbed 0.4%. Asian markets were mixed, with Japan's Nikkei 225 down 1.37% while Hong Kong's Hang Seng climbed 0.9% and the Shanghai composite up 1.7%.

Stocks have declined in three of the past five sessions and are way off their all-time highs as the nation heads into what Trump has warned "could be a hell of a bad two weeks." The White House projected Tuesday that as many as 240,000 Americans could die of the coronavirus. The pandemic has upended business and social life as people are being told to stay home to slow its spread. The total number of coronavirus cases across the globe surpassed 1 million on Thursday.

The 10 million Americans who filed for unemployment benefits in the past two weeks erases nearly all the jobs created in the past five years. The job losses are wide in scope, touching industries as diverse as retail and travel to professional services and manufacturing. And the numbers will grow: Economists expect that 40 million people will be out of work by mid-April.

Despite the $2.2 trillion relief package passed last week, Wall Street mavens are nearly unanimous in their thinking that the economy is going to get worse.

"With much of the positive news from policymakers behind us for now, we expect grim news to dominate the headlines in coming weeks," said economist and portfolio strategist Lauren Goodwin of New York Life Investments in a note Thursday. Equity investors "are realizing that we may be near a peak in global case growth, but that does not mean we are near the end of the crisis."