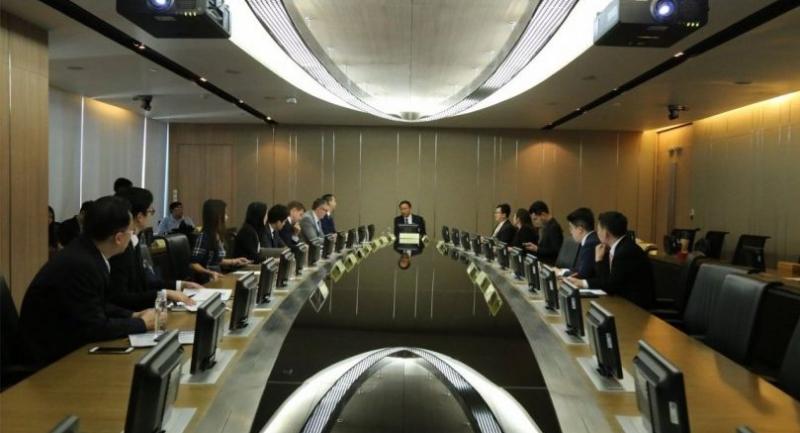 European firms wooed for creation of financial hub in EEC

Industry Minister Uttama Savanayana held discussions with Geoff Donald, executive director of the Europe-Asean Business Alliance (EABA) and representatives from 15 leading European firms who called on Deputy Prime Minister Somkid Jatusripitak yesterday.
Uttama said: “Thailand has the proper location to become a financial hub and Somkid has told us about the policy to promote Thailand as a regional financial hub, especially linked to CLMV.”
The EEC also has a plan to set up a financial centre for convenient financial transactions.
“We insist on supporting the policy” to promote Thailand as a financial hub, particularly linking Thailand to the CLMV, Uttama said in response to a question from Netherlands’ leading financial institution ABN Amro.
The representatives of the 15 European firms who met Somkid yesterday came from the finance, medical services, bio-industry and cybertechnology industries. EU direct investment in Thailand is the third highest behind Japan and China.
Moscow-based security software-maker Kaspersky Lab is interested in setting up a research centre, while Swiss healthcare company Hoffmann-La Roache AG is interested in establishing a research centre on biotechnology and biology. Both have been encouraged to invest in the Eastern Economic Corridor of innovation (EECi).
The Thai government has prepared an action plan on business and financial hubs (2017-21), aiming to develop a special economic zone in the East as a pilot area for Thailand 4.0 and focusing on innovation and technology development.
Among the key targets are to make the EEC a centre for investment for targeted industries, business and financial transactions, aiming to lure investors and firms to set up their operations ranging from international headquarters, international trading companies, treasury centres to financial institutes. The area has been earmarked as business and financial hubs in the future.
Both offshore and onshore transactions are targeted for transactions in this area, while some measures and legal issues will be adjusted. An example is allowing foreign financial institutions to set up more branches in the area and drafting the land and building law for ease of doing business.