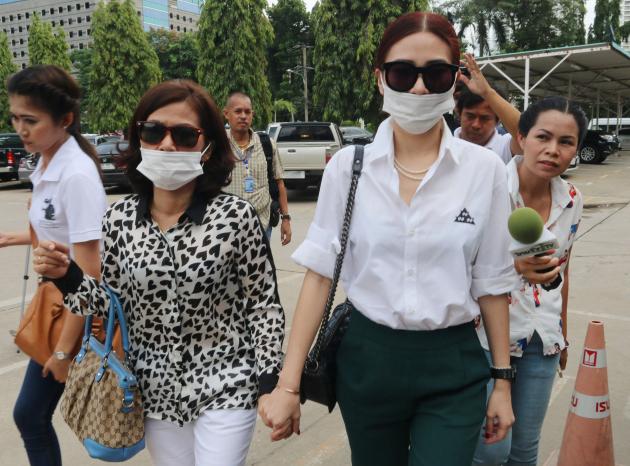 BROKERAGE-FIRM employee Uracha Wachirakun-thon and her mother reported to police yesterday morning, insisting that late construction tycoon Chuwong Saetang had transferred shares to Uracha “out of love” and that the process was legal.
The two women, who maintained their innocence, were later granted bail on a Bt3-million guarantee and on condition that they would not leave the country.
Uracha, 26, received more than Bt30 million worth of shares, which she put in the account of her mother Srithara Promma, 52. While Uracha is facing charges of theft and forgery, her mother faces the charge of theft or having stolen goods in her possession. Their lawyer Decha Khunthong said the mother and daughter would now only testify in court.
Before a three-hour interrogation session with police, Uracha had also told reporters that Chuwong had given her the shares “out of love”. She added that she had later met Chuwong’s friend, ex-deputy commerce minister Pol Lt-Colonel Banyin Tangpakorn, but did not know him well. Banyin is facing the same charges and is out on bail.
Uracha said she did not know if Chuwong had used a pen with erasable ink to sign the papers as claimed by Banyin, adding that she only checked the content and signatures before another employee of the brokerage firm completed the share transfer.
Former “pretty” presenter Kantana Siwathanapon, 26, who received Bt228 million worth of shares and is facing charges of theft, forgery and taking possession of stolen items, contacted police saying she would surrender today.
Kantana’s lawyer Seksan Senachu said he had contacted his client, who would show up to fight the allegations today. He said she had not shown up earlier because of pregancy issues, adding that they also needed time to prepare for bail.
On June 26, after a game of golf with six or seven friends in Samut Prakan, Banyin was driving Chuwong home when his car crashed into a tree. Chuwong reportedly sustained fatal injuries and subsequently died, while Banyin was only slightly injured. Later Chuwong’s family raised concerns over the accident and the Bt300 million worth of shares transferred to the two women just days before his death.
Police reopened the case and found irregularities in the share-transfer documents, including a misspelled signature and alleged text correction. After two months of gathering evidence, police obtained arrest warrants this week for the suspects.