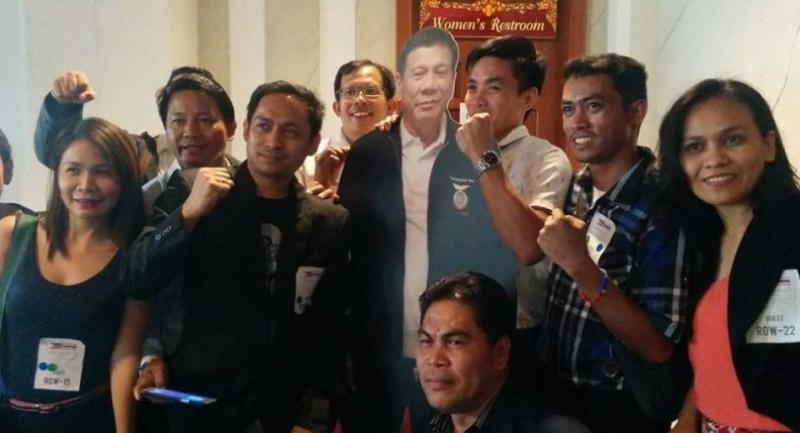 Filipinos in Thailand back Duterte’s war on drugs

WHILE the Philippines tourism secretary urged the media to “tone down” coverage of President Rodrigo Duterte’s deadly drug war, complaining that reports on extrajudicial killings were scaring away foreigners, Filipinos living in Thailand voiced approval of the tough action.

Almost 2,000 Filipinos flocked to the Royal Thai Navy Hall yesterday to meet Duterte, who has become a hero to many of his compatriots.
Accompanying Duterte on a trip to Thailand, Tourism Secretary Wanda Teo insisted that the Philippines was a safe destination but said journalists were making the country a hard sell because of their focus on the killings.
“Help us because … it’s really difficult for me to sell the Philippines, especially when extrajudicial killings becomes the topic,” Teo told reporters in Duterte’s entourage. Teo said tour operators abroad were “always” asking her about the issue, citing Asia and Europe as regions where people were particularly concerned. “To the media, please tone down a little the extrajudicial killing [reports],” she said.
About 5.9 million tourists visited the Philippines last year, compared with 32.6 million for Thailand.
Duterte was elected last year after promising during the campaign to eradicate drugs in society by killing tens of thousands of people.
Since he took office in June last year, police have reported killing 2,594 people in the drug war while rights groups say thousands more have been killed in a state-sanctioned campaign of mass murder. However, Filipinos in Thailand had a different view.
“He’s my idol. And things being said about him from the outside are much politicised. They just want to disturb his administration, which goes by our constitution,” said Reagan Bronola, a Filipino who has settled to teach in Bangkok for 10 years.
“Things hadn’t changed since Marcos,” Bronola told The Nation, referring to the former dictator President Ferdinand Marcos. “Then comes Duterte. He does what he promised to do. Despite what others may see, I think he wants peace in the Philippines.”
Filipina teacher Janice Fuentes shared the same sentiment. “He has cleansed the Philippines. Corruption is not that big now,” Janice said. Like Reagan, she didn’t believe criticism surrounding Duterte on human rights issues. “It’s just not true,” she said.
“It makes us cry how he has changed the Philippines. If I get to speak with him, I will just thank him,” she said. “We love him so much.”
Angelou Barcelona, from Mlang, Cotabato, is married to a Thai national and has lived in Thailand for seven years. She told The Philippine Daily Inquirer that she voted for Duterte. She also expressed admiration for the president’s war on drugs and corruption.