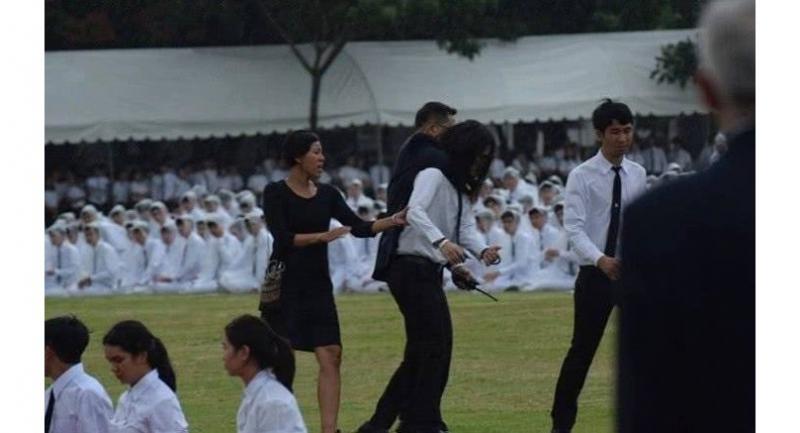 Chulalongkorn University (CU) on Wednesday issued another statement calling for international media to be fair in the coverage of the incident regarding the dismissal of student activists from the student council over their activism against the school’s oath-taking ceremony.

The handling of the situation was purely an internal affair, the statement read. It should not be linked with divisive politics and suppression of dissent, which seem to be the dominant discourse or news frame presented in western and local English-language media, CU said.
However, the university insisted that every community and society has the right to reserve a certain space or activity as an exception from the free speech rule, including a space of holiness, sensitivity or pain.
“The ‘oath of allegiance’ ceremony, although conceived 20 years ago, some years after the installation of the statues in 1987, has been widely regarded as a holy ritual in the university’s community which extends from students to staff and alumni,” the statement read.
CU also said it had a long history and a royal lineage that are imbued in its tradition and beliefs that may be uncommon to Western liberal values. Although it supported liberalism and freedom of expression, it also had its cultural roots and harmony to balance, it said.
CU said it would appreciate understanding and sensitivity to its standing in media coverage.
The university has met with heavy criticism after dismissing Netiwit Chotiphatphaisal and other four students from student council following an incident during the oath-taking ceremony. Netiwit was the head of the council.
Netiwit and his colleagues said that they walked out of the “ceremony” as it rained.
Other students continued the ritual.
However, the university countered in the statement that students were sufficiently notified that a space had been designated for students with special physical conditions, religious beliefs, or political attitudes and ideologies that would interfere with their kneeling and paying obeisance. The statement said the students chose to disrupt the process by strolling out of the line reserved for their rank as university council members and performed their “symbolic act” — bowing — to contrast with hundreds of other students who were paying obeisance in unison.
A lecturer grabbed one of his colleagues by his neck, angered by the act that he deemed disrespectful.
CU also said in the statement an investigation and disciplinary procedure were underway for the lecturer.
This lecturer resigned from his position as assistant to the president for student affairs on August 7, a few days after the incident, according to the statement.