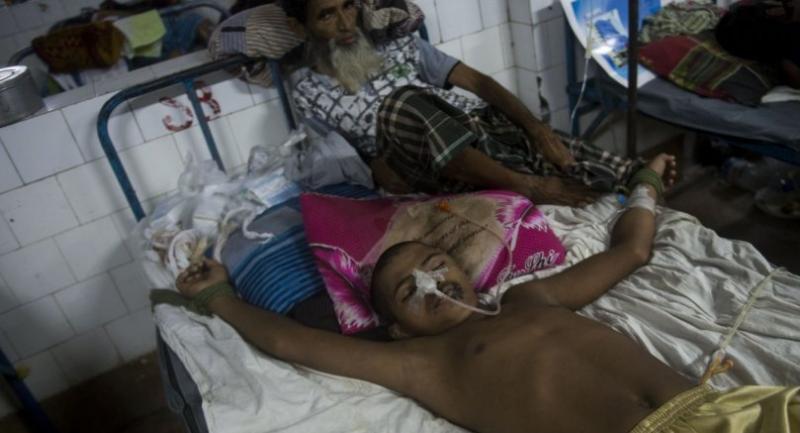 CHITTAGONG, Bangladesh - Nurses at the Bangladeshi hospital treating 16-year-old Rohingya refugee Mohammad Junaed for a bullet wound have had to tie him to his bed to stop him jumping out of it in pain whenever the morphine starts to wear off.

The traumatised teenager should be in intensive care after he was shot in the head allegedly by soldiers in his native Myanmar just days ago.

But his family, who fled the fighting across the border with little more than the clothes they were wearing, have no way of paying the fees.

"They (soldiers) shot him just above the eye and he is utterly traumatised. He is in enormous pain," the boy's father Mohammad Nabi told AFP at the Chittagong Medical College Hospital where he is being treated.

It is the only hospital in the area with the facilities to treat serious gunshot wounds and has been utterly overwhelmed since fresh violence broke out in Myanmar's Rakhine state two weeks ago, triggering a flood of mostly Rohingya refugees across the border.

It quickly ran out of beds, leaving many of the 70 Rohingya refugees being treated there to find a space on the floor.

Two have died, several are in a critical condition -- and more are arriving all the time.

Surgeon Kamal Uddin said resources at the hospital in the southern city of Chittagong, some 200 kilometres (125 miles) north of the Myanmar border, were severely strained.

"We are battling to provide better treatment for these poor people, but they are critically injured and their fate remains uncertain," he told AFP.

Witnesses say entire villages have been burned since Rohingya militants launched a series of coordinated attacks on August 25, prompting a military-led crackdown.

Junaed's father Nabi, a 57-year-old widower from Maungdaw township, was separated from the rest of his six children when they fled, although he has since heard they all made it across the border.

The youngest, 14, was also shot and is being treated at one of the clinics near the border.

Bashir Ullah said he was shot in the leg by soldiers who burned dozens of houses in his village near Maungdaw in Rakhine, Myanmar's poorest state.

"They started firing indiscriminately as we ran for our life. I fell on the ground and a bullet hit my leg," Ullah told AFP as he cried out in pain.

"I am lucky. I was hit by bullets, but did not lose much blood."

He said dozens of people from his village had been killed -- a claim that AFP cannot independently verify, although it is clear that the recent fighting is the fiercest in Rakhine in years.

Myanmar's government, led by Nobel peace prize laureate Aung San Suu Kyi, has rejected allegations of atrocities and placed the blame for the violence squarely on the Rohingya militants.

Impoverished Bangladesh has been overwhelmed by the huge numbers of refugees flowing over the border, many of them sick or injured and all of them exhausted after the long and dangerous journey.

Hossain Jahur, 22, said troops came to his village in the middle of the night and dragged him and his family from their home.

"They beat and tortured us. At one stage I tried to flee, but a soldier threw a bomb at me. It blew off parts of my hand," he said.

Despite his wounds, Jahur managed to walk to the border, and then on to the hospital in Chittagong for treatment.

But his long-term future is far from clear.

"The Myanmar army want to drive the Rohingya people out, even though our ancestors have lived there for centuries," he said.