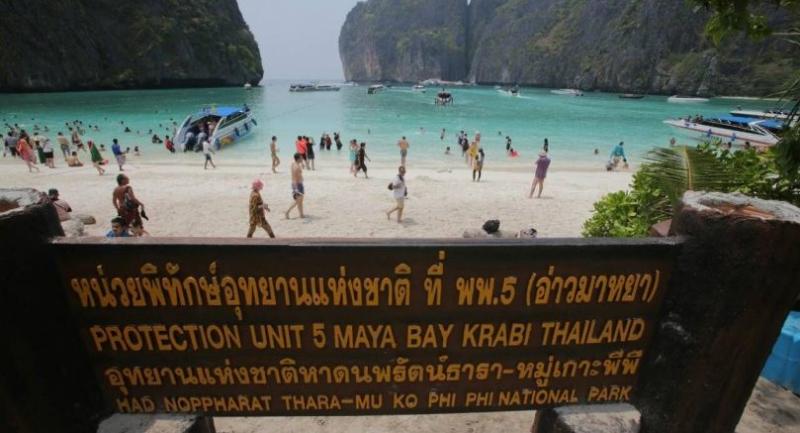 SPECIAL REPORT: A tough step to save reeling paradise

THE YOUNG AMERICAN backpacker Richard found his way to Bangkok, arriving in Khao San Road bustling with backpackers, before venturing further to a so-called paradise, where he joined the neo-hippie lifestyle pursued by a number of adventurous tourists who arrived before him.
It’s Maya Bay on Phi Phi Island, famously chosen as the so-called paradise setting for the popular 2000 film, “The Beach”, featuring Leonardo DiCaprio starring as Richard.
There, Richard found peace as he sat on the beach, looking into the distance past the deep blue turquoise sea of the nearly deserted bay.
Such is the serenity of the beach and the bay that has been showcased worldwide, that it has ever since earned fame and an endless procession of tourists.
But now it is in danger of being ruined. Recent years have seen such a flood of tourists that the beach has now exceeded its capacity.
This led to the recent notable action by the Department of National Parks, Wildlife, and Plant Conservation (DNP), to close the bay in order to give nature a chance to revive before it is too late.
“The location is critical in the sense that it has become a symbol because it is world famous,” said Dr Thon Thamrongnawasawat, a member of the national marine and coastal resources committee that advises the department. “If we can do this here, we can do this elsewhere as well.”

Thon, a marine ecologist who has frequented almost all of the islands in the South including Phi Phi, firmly grasps the overload these islands face due to the constant increase in the number of tourists.
It’s another chapter in the classic conflict between income generation and nature preservation. The point is the conflict cannot be resolved in Thailand simply by closing the island to visitors, and Thon knows there will be a number of things to do afterwards.
Thailand still relies heavily on tourism, he said, and it’s one of the prime sectors highlighted in the 20-year national strategy to help drive the country’s GDP.
So far, tourism comprises about 20 per cent of total GDP, with total revenue estimated at around Bt3.3 trillion. This income comes largely from the 40 million foreign tourists; more than 70 per cent tend to visit the country’s popular marine locations, Thon noted.
This has caused several popular marine spots to become crowded with foreign tourists who wish to appreciate their beauty, particularly the three main attractions in the Had Nopparat Tara-Mu Ko Phi Phi marine park, where Maya Bay is located.
About 4,000 tourists and 200 boats daily travel into and out of Maya Bay, said Thon.
Some 5 million tourists will this year visit Maya Bay and the other two critical marine parks – Similan and Ao Phang-nga – with an increasing portion coming from China.
This number, Thon noted, was greater than the total number of tourists visiting countries like Chile and the Maldives.
“These three parks alone see some 5 million tourists, which is more than the number visiting some countries. This is something that we need to understand first – the tourists and the income they would generate.
“On the other hand, our national parks were created to serve educational purposes. It’s impossible for them to receive such a huge number of tourists. I’m talking about our management now, that is no longer valid for the situation,” said Thon.
Recognising the heavy pressure on the ecosystem from the growth in tourist numbers, the national marine and coastal resources committee decided to call a meeting over a week ago to discuss the situation.
It decided to close Maya Bay for four months from June to September, an action that Thon calls a strike.
“It’s the way that we will rebalance what is at stake,” said Thon.

Giving nature a chance
Songtham Suksawang, director of the DNP’s National Parks Office felt relieved after the first critical step was taken.
As the office’s director who oversees 150 national parks nationwide, of which 26 are embattled marine parks, Songtham conceded that the department clearly felt the pinch about a year ago. As reported by the department’s study team, Songtham had learned about some damage done to the bay by tourists.
The beach sand had become tightly packed due to the weight of the loads of tourists who were roaming on it, with other parts eroding and leaving tree roots exposed.
If left unattended, the damage would have become irreparable, Songtham said, and that’s the reason why a meeting of the committee was called to discuss the worsening situation.
The department chief, Thanya Netithammakul, then made the policy clear that income generated by tourists was not more important than sustainable resources.
That policy helped the committee do what was needed and close Maya Bay to give nature a chance to rehabilitate the environment.
According to Songtham, new management approaches will be introduced to Maya Bay.
The number of visiting tourists will be cut by half when it’s reopened, along with the number of boats transporting them to the site.
With those numbers halved, and with the help of technology to help guide stagger the times of arrival on the beach, plus a newly introduced route to the beach, the department is hoping that both the beach itself and the park officials patrolling it, could receive and handle the traffic better than before.
If successful, it could lead to changes at other critically endangered beaches and bays in other marine parks. Meanwhile, the department has hired some university researchers to study potential management approaches, Songtham said. “It’s the challenge of modern national park management – how can we attract tourists to come and enjoy the places while ensuring our resources remain sustainable?” said Songtham.
“We may need to redefine those who come to us as ‘visitors’. Then we could deal with them and guide them better, as our parks are for educational purposes, not purely mass tourism. And as such, we need to equip our visitors with some knowledge.”

For a marine ecologist like Thon, he has hopes that at least the coral reefs could be rehabilitated.
Once the beach is closed, he is planning to lead a small team of marine ecologists to replant and nurture the bay’s coral reefs, with the hope that over the next four months they would grow and once again bloom underwater.
The national strategy committee has addressed the growth and maintenance of the coral reefs as part of sustainable marine and coastal systems.
They want to limit decline to no more than 50 per cent over the next five years, and with rehabilitation reduce that to no more than 20 per cent over the next 20 years.
The health of reefs “are sort of prime indicators that would help lead to other relevant actions”, said Thon.
“We would not be able to protect them all, but we must at least where we can, and with an effort to figure out how we can control tourism to not have as much impact as it is now.”