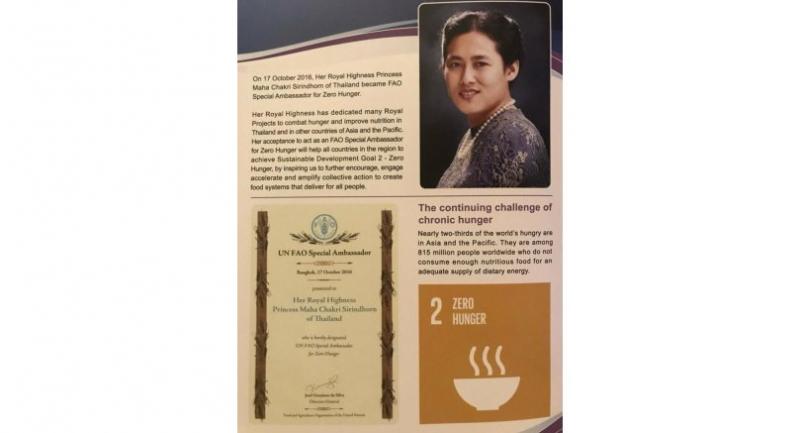 HER ROYAL Highness Princess Maha Chakri Sirindhorn has pointed out the need for a holistic approach in eradicating hunger and malnutrition in all its forms and called for greater agricultural diversity.

The Princess is the Special Zero Hunger Goodwill Ambassador for the UN Food and Agriculture Organisation (FAO).
In a video message on Thursday to the FAO’s Regional Conference for Asia and the Pacific in Fiji, she said: “Over-reliance on a few crops means we are not spending enough time and resources producing other, more nutritious, foods such as milk, eggs, legumes, fruits and vegetables. We must strive to diversify agriculture to create dietary diversity, to ensure healthy diets and to address malnutrition in all its forms.”
During the event’s opening ceremony, FAO director-general Jose Graziano da Silva urged Asian and Pacific countries to sharpen their focus on achieving “zero hunger” by reducing rural poverty, addressing hunger and malnutrition and adapting the agricultural sectors to climate change.
“Countries need to step up their efforts to |bring the fight against hunger back on track,” he said.
Despite the region’s “remarkable progress” in reducing undernourishment over the last two decades, progress has slowed and the number of people suffering hunger has increased in some areas, especially Southeast Asia, said Graziano da Silva. Of the 815 million people who suffered from hunger in 2016, 490 million, or 60 per cent, lived in Asia and the Pacific.
Zero hunger by 2030, one of the official UN Sustainable Development Goals, remains within reach, Graziano da Silva said as he urged that countries build resilience in the rural communities where poverty and hunger were still concentrated. The goal is to go beyond eradicating hunger to ending all forms of malnutrition, he said. To achieve that will require that countries assist poor farmers, fisher folk and pastoralists to adjust their production systems and practices and address economic, social and technical constraints faced by farmers.
The region’s rapid economic growth has not translated into higher incomes for rural communities, Grazianao da Silva noted, and he suggested implementing social protection systems and school feeding programmes where the produce is sourced locally from nearby family farmers.
Graziano da Silva invited countries to propose how FAO could best assist them in planning and implementing actions, as well as mobilising financial support to build rural livelihood resilience.
FAO currently supports 12 projects in the region under the Green Climate Fund, a mechanism that helps developing countries finance climate change efforts.