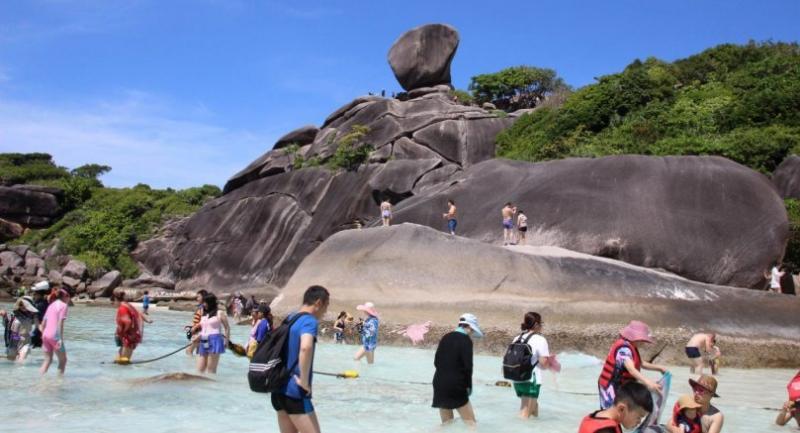 Ban on overnight stays at Similan islands from Oct

OVERNIGHT STAYS will no longer be allowed in the Mu Ko Similan Marine National Park off Phang Nga province starting from October, while the number of visitors to its pristine islands will also be limited as part of efforts to protect the fragile marine ecosystem from tourism and pollution.
Deputy director-general of the Department of National Parks, Wildlife and Plant Conservation, Chongklai Voraphongston, revealed yesterday that the national park was suffering problems caused by tourist overcrowding and environmental impacts of visitors’ activities. He said the department had decided to take strong measures to tackle these problems by not allowing visitors to stay overnight on the islands, starting from the opening of the tourism season on October 15.

Mu Ko Similan suffers among the most serious overcrowding of any Thai national park, with some 5,000 to 6,000 visiting its Andaman Sea island chain each day to enjoy the famous scenery and colourful and diverse coral reefs.
According to department statistics, since the start of the current fiscal year in October 2017 the national park has welcomed 883,436 visitors, making it the third-busiest marine national park behind Had Nopparat Thara-Phi Phi Island National Park (1.3 million) and Ao Phang-Nga Marine National Park (1.1 million).
Chongklai said the park is the first to take the bold step of forbidding tourists from staying overnight on the islands. He said if the measure were successful in reducing tourist congestion as well as the environmental impact, the DNP would enforce it at other marine national parks, too.
“By allowing tourists to stay overnight on the islands, which have a fragile ecosystem like Mu Ko Similan, the islands’ ecosystem and natural resources unavoidably suffer from serious environmental impacts,” he said. “This is because providing accommodation and facilities for tourists to stay generates pollution in many forms, including consumption of electricity and freshwater, which pollutes the air and water.”
The longer the period tourists stay on the islands, the more garbage and wastewater they generate, which is very hard to manage on small remote islands like Similan Islands, he added.

There are 35 bungalows and two camping grounds, consisting of 40 tents, for tourists on the islands, which can accommodate up to 190 tourists per night. All the accommodation for the tourists is operated by the national park.
“We will not just stop at overnight stays on the islands, we are also planning to cap the number of visitors to ensure the islands will not receive more tourists than their capacity, as overcrowding harms the environment and the ecosystem of the national park,” Chongklai said.
“The department’s team of experts is now studying the appropriate number of visitors per day for Mu Ko Similan, in order to set a limit.”
He said the DNP would produce a clear plan to control the number of tourists around the time of the national park’s reopening on October 15.
Thon Thamrongnawasawat, a member of the national reform committee and leading marine biologist, praised the DNP’s move as brave, and said this policy aligns with the marine national park reform plan under the national strategy.
“At ordinary tourist attractions, overnight stay does not have a huge impact on the area, but offshore islands have a far more fragile ecosystem and the consequences and pollution from tourism activities will have more serious damaging effects,” Thon said.
Complimenting the policy, he said forbidding overnight stays would not only relieve stress caused by prolonged excessive tourism, but would also serve as an example for preserving Thailand’s rich marine ecosystem with sustainable tourism.