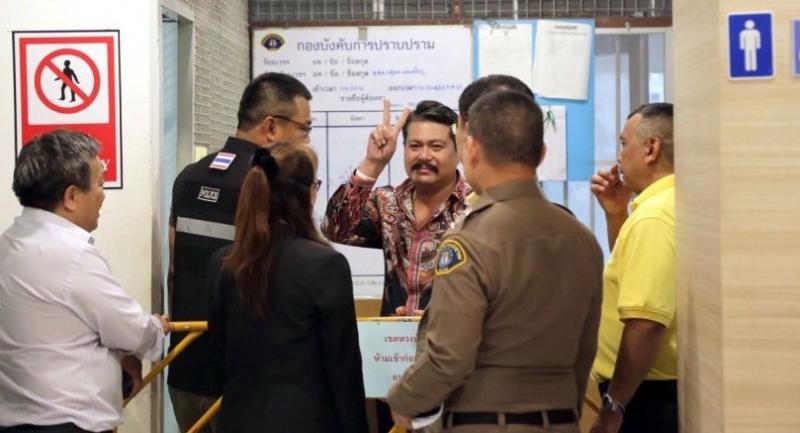 Accused of assault, Wan ‘just doing what dads do’

POLITICIAN WAN UBUMRUNG TOLD reporters on Tuesday that “a sense of fatherly duty” drove him to assault his son’s rival outside a Bangkok pub on the night of April 23. He was granted unconditional temporary release in the assault case after posting Bt300,000 bail.

The Southern Bangkok Criminal Court ordered him to report for another hearing on September 10.
Before being brought before the judge as police applied for an initial 12-day detention extending through August 4, Wan made an “I love you” gesture with his fingers and told reporters, “I love my son. I have to perform my fatherly duty.”

After securing release on bail, he declared, “I miss my son. I want to go back and hug him. Thanks, everyone, for your support,” and repeated his love gesture.
The 44-year-old son of former deputy prime minister Chalerm Ubumrung surrendered to police on Monday in response to an arrest warrant over the alleged April 23 assault.
Wan is accused of assaulting Panuwat Punnarattanakul, 34, son of a Mae Thong Suk gold-shop owner, outside the Demo pub in the Soi Thong Lor area.
The Southern Bangkok Criminal Court on July 19 approved arrest warrants for Wan and his friend Yossapat Sampanchai.
Following his surrender on Monday, Wan spent the night in detention, reportedly because police feared he might tamper with evidence.

Police say Panuwat and his friends encountered Wan, Yossapat, Wan’s son Archawin “Kamo” Ubumrung and seven or eight other people outside the Demo. Wan allegedly wanted to talk to Panuwat about a dispute he’d had with Archawin in Singapore.
Panuwat was punched several times in the face and floored, while Yossapat allegedly threatened Panuwat and his friends with a pistol and fired shots into the air to keep them at bay.
Panuwat filed complaints with Thong Lor police and the Crime Suppression Division, claiming the case involved an “influential figure”.
Panuwat was charged in August 2016 with carrying a gun into a Thong Lor restaurant, according to Pol Lt Colonel Ajiravedh Subarnbhesaj, then captain of the local precinct and among officers responding to the restaurant. He has commented on the case on his Facebook page.
The pub showdown wasn’t the first involving members of the Ubumrung family.
Chalerm’s youngest son Duang, then known as Duangchalerm, was a prime suspect in the murder of Crime Suppression Division detective Senior Sgt Maj Suwichai Rodwimut at the Twenty Club in Bangkok in 2001. He was ultimately acquitted by the criminal court, which considered the evidence against him insufficient and witness accounts contradictory.