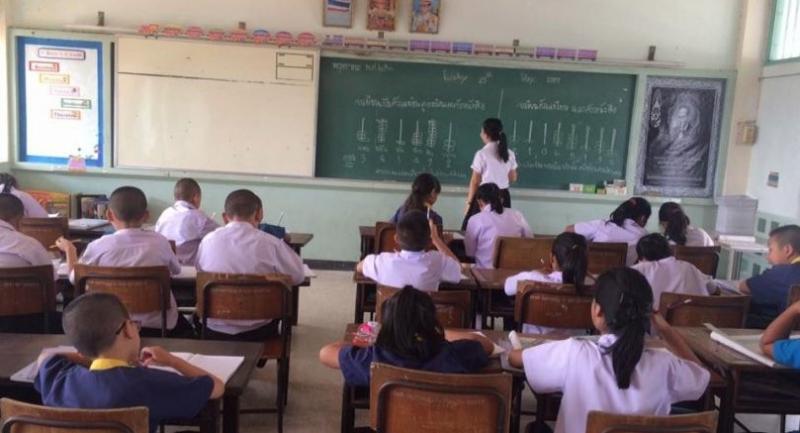 THE ONGOING transition of the educational sector into a new and hopeful era risk stumbling after a drastic move by authorities to cut the duration of the teacher-education programme back to four years, many experts warned.
“Why will we undo the good changes that have already started for the sector?” asked prominent educator Athapol Anunthavorasakul, an academic from Chulalongkorn University’s Faculty of Education.
Concerns are growing, particularly in light of the fact that all Rajabhat universities will be pressured – even if not required – to start offering four-year programmes from 2019 onwards.
If the change takes effect next year, Rajabhat universities will have to rush to adjust their programme’s content so as to inform their applicants in advance. Applications will be accepted in December.
When Rajabhat universities reduce the duration of their teacher-education programmes from five to four years in response to the Education Ministry’s policy, other teacher-training institutes will follow suit too. Together, they will erode the five-year programmes that were introduced in 2004 in the hope of raising teacher quality and promoting the prestige of the teaching profession.
“Many graduates of the five-year programmes have entered the educational sector already. Some have worked there for more than 10 years and generated positive impacts along the way. So, a good transition has begun in reality. Why are we going to stop it?” Athapol posed.
He said if the five-year programmes continued, their better-trained graduates would finally replace retiring teachers who graduated from previous teacher-education programmes where the training was less relevant to today’s world.

The director of a small secondary school in Nakhon Sawan province, who agreed to an interview on condition of anonymity, said that the new-generation teachers – those from five-year programmes – had already proved very active and professional.
She too cannot understand why the teacher-education programme is being shortened.
Just like Athapol, she believes that students have received much more from the five-year programmes than their predecessors did from four-year ones.
“When a whole year is added to the programmes, the students learn about designing course syllabus, conducting class-related research and are able to get more practice teaching,” Athapol said.

Athapol
He added that supervisors could also monitor their students more closely during their internship at schools.
“Our five-year programmes have been designed to deliver high professional standards in line with the criteria set by the Office of Higher Education Commission and the Teachers’ Council of Thailand [TCT],” he said.
According to the school director, students from the five-year programme inspect the schools where they are going to practice teaching during their third year. In the fourth year, they return to practice teaching to primary as well as to secondary-school students for one month, so as to determine which level of students they would prefer to teach. In the fifth year, they act as teacher trainees.
“Most trainees are able to draw up the course syllabus on their own,” she said.

Rajabhat Education Deans Council’s president Dr Direk Pornsima, who is the dean of Phranakhon Rajabhat University’s Faculty of Education, said his council members in fact disagreed with the shortening of their programmes.
“But if it is the policy, we will have to respond,” Direk said. He added that if the duration would really have to be reduced to four years, students might be required to study during the usual summer-break months too.

Dr Udom
Last week, Deputy Education Minister Dr Udom Kachintorn announced that all Rajabhat universities would reduce the duration of their teacher-education programmes to four years from next year onwards.
This is a sudden change, given that the presidents of the Rajabhat universities were, late last month, still discussing how to upgrade their five-year teacher education programmes for better quality.
“Based on what information have you made the decision to cut the duration?” Athapol asked. “Or do you just make the decision and try to find whatever research to back it?”
He said no other country in the world would change the essence of teacher-education programmes based on the wishes of the powers-that-be, and not on the needs of the country’s educational sector.
“From my experience, teacher education has a direct impact on educational quality,” Athapol said.

Rattakorn Kidkarn, dean of Nakhon Ratchasima Rajabhat University’s Faculty of Education, has so far argued that the shorter duration would be in line with the world’s emerging trend.
“In the future, all courses at educational institutes will become shorter as people start to learn more outside the class,” he said. “This trend will affect not just teacher education but also other fields of study.”
Rattakorn does not disagree with the decision to shorten teacher-education programmes. But he is worried about the decision to offer four-year programmes from next year onwards.
“We have not yet revised the curriculum,” he said. “I am not sure whether we will be able to do it before we start recruiting new students for the 2019 academic year in December.”
According to Rattakorn, revision of the curriculum involves several steps, including a review by a committee from the Faculty of Education, academic council, university council and the TCT. “The new professional standards have not come out yet. How will we start revising our curriculum then?” Rattakorn said.
Regardless, Rattakorn confirmed that his institute would comply with the order for a shorter-duration programme.
“We will do our best to ensure that we can deliver quality graduates for the country, even though the programme is becoming shorter,” he said.
A lecturer at a Rajabhat institute, so far, worried that the rush by universities to respond to the policy to cut back the duration of teacher-education programmes to four years would hardly guarantee any quality.
“If students of these rushed programmes fail to meet the TCT standards in the end, who will take responsibility?” he asked.