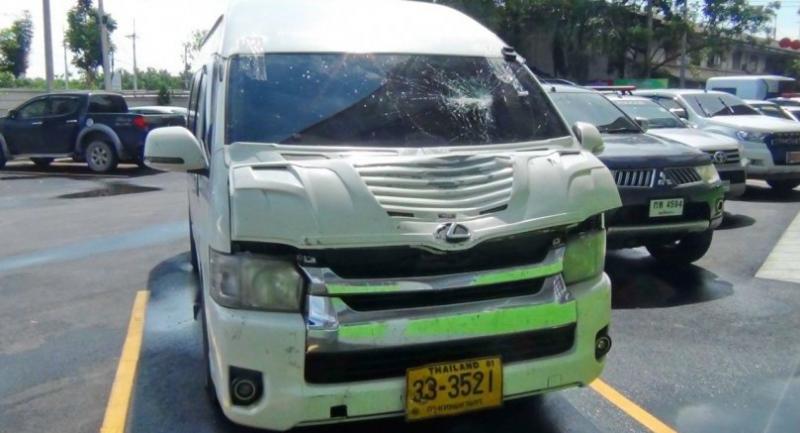 A 29-year-old Sa Kaew van driver who hit and killed a 51-year-old Filipino cyclist during a long-distance event in Chachoengsao's Ban Pho district on Tuesday, was arrested on Thursday night as he attempted to flee to Cambodia, police said.

Chutipan, a chartered van driver, reportedly confessed to running over cyclist Russel Agaton Diokno Perez. He claimed that he did not see the cyclist and fled the scene, police said.
The suspect later told Apichet Chaiban, the van owner, that he ran over a cow on a return trip from Bangkok to Sa Kaew. Apichet claimed insurance for the van damage and sent it to a Min Buri garage for repair.
Police, who traced the van's route from CCTV footage, located and confiscated the van on Thursday and submitted it for forensic investigation.
A check of the traffic light system at the scene of the incident showed that the van jumped a red light and crashed into the cyclist, police said.
Chutipan also admitted to taking methamphetamine pills as he became stressed over the incident, police said.
Beside the criminal case against Chutipan, police will also have the insurance company negotiate a compensation payment with the deceased man's family.
Perez was hit by the van while he was making a right turn at the traffic lights at Hua Noen intersection on Sirisothorn Road at 1.30am on Tuesday.
Perez was only 50 kilometres from the finish line in the 1,000 BRM Suvarnabhumi Airport-Trat rally, according to the Audax Randonneurs Thailand fan page on Wednesday. Perez was pronounced dead at Ban Pho Hospital.