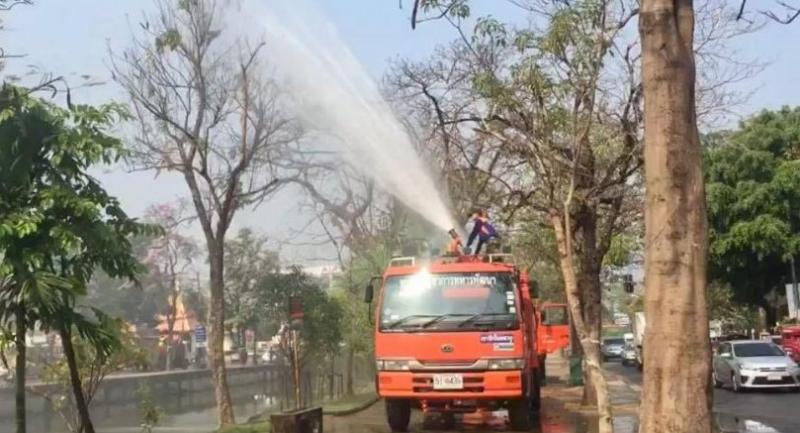 Chiang Mai finally lost top spot but remained very polluted on Tuesday as it fell to the fourth most polluted city on the planet, scoring 182 in the air quality index (AQI) at airvisual.com.

The website as of 10am reported that the northern city, with a 182 AQI and a PM2.5 level of 114.7 micrograms per cubic metre (mcg) of air, had been headed by Delhi (208mcg), Beijing (198mcg) and Lahore in Pakistan (186mcg).
Meanwhile, the Pollution Control Department cited lower but still unsafe levels of PM2.5 – airborne particulates 2.5 microns or less in diameter – in most parts of the nine northern provinces, ranging from 43-143mcg.
The department, measuring 24-hour averages of PM2.5, put the tambon of Wiang Phang Kham in Chiang Rai’s Mae Sai district at 143mcg, followed by Tambon Jong Kham in Me Hong Son’s Mueang district at 105mcg and Tambon Wiang of Chiang Rai’s Mueang district at 95mcg.
Also wheezing in thick haze were Chang Pheuk (85mcg) in Mueang Chiang Mai, Nai Wiang (80mcg) in Mueang Nan; Mae Pa (73mcg) in Tak’s Mae Sot district; and Sri Phum (71mcg) in Mueang Chiang Mai.
The safe limit of PM2.5 in Thailand is 50mcg, which is double the dose recommended by the World Health Organisation, and the safe level for AQI is 100.
The high level of haze in Chiang Rai reportedly stemmed from the many forest fires, both in the province and from nearby areas.
On Tuesday, a 500-rai (80 hectares) section of forested land overlapping Tambon Tan Tawan of Chiang Rai’s Phan district and Tambon Wiang Hao in Phayao’s Mae Chai district was damaged by fire, which continued to rage on while officials and volunteers – having trekked two hours into the forest to the fire’s location in a steep mountainous area – were trying to put it out as of press time.
Fifty villagers in the two tambons also hurriedly built a firebreak to prevent the spread of the forest fire, which was suspected of having been inadvertently started by villagers who had entered the area to collect forest products.
Chiang Mai Public Health Office deputy director Dr Waranyoo Jamnongprasartporn on Tuesday revealed that, in the past two months, more than 90,000 people had sought medical help about symptoms that could be associated with smog.
From January 6 to March 16, 91,182 people sought help after suffering from the four ailments associated with or which could flare up due to high haze, he said.
They comprised 48,037 respiratory-disorder patients, 38,857 heart and coronary-artery disease patients, 2,661 with eye inflammation and 1,627 people with inflamed skin.
Waranyoo also urged those working outdoors to wear a facemask, drink plenty of water and contact a doctor if they develop an abnormal health condition, while others should refrain from staying outdoors during a period of high haze.