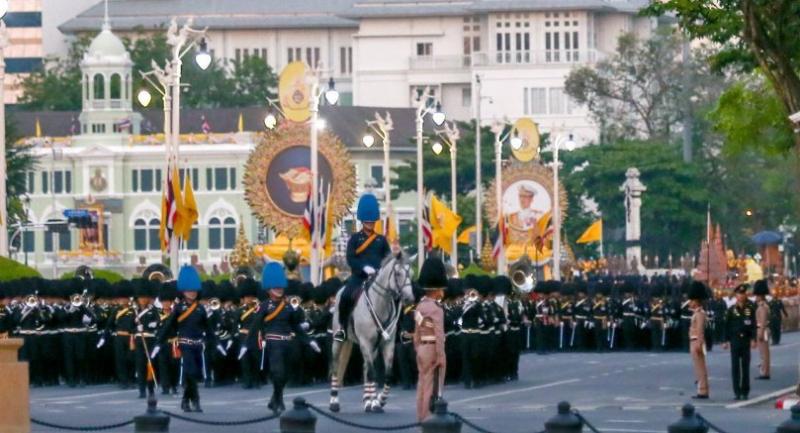 Public urged to be part of Royal Coronation

Members of the public have been invited to become a part of history and line the 7,150-metre-long stretch of road to welcome the royal motorcade during the coronation ceremony of His Majesty the King on May 4 to 6, Police Strategy Office commissioner Pol Lt-General Kraiboon Suadsong said.

Kraiboon made this comment after attending a meeting at Interior Ministry on Monday where the committee tasked with providing security during the ceremony discussed preparations. He said measures will be put in place from May 2 to 6 to support tens of thousands of people, who will travel from every corner of Thailand to Rattanakosin Island in Bangkok to witness the Royal Coronation.
Kraiboon advised people to present their Thai national ID to gain access to the ceremonial grounds.
Bangkokians will be able to park their cars at the Lat Phrao MRT station, the Courts of Justice grounds in Chatuchak as well as at the Office of the Attorney-General, the headquarters of Siam Commercial Bank and the Kasetsart University campus, before boarding shuttle buses provided by the Transport Ministry.
He said 26 sites have been prepared for up to 40,000 cars coming from the provinces, including at Impact Muang Thong Thai, Government Complex on Chaeng Wattana Road, Bitec on Bang Na, the Buddha Monthon Park in Nakhon Pathom and the Central West Gate Mall in Nonthaburi’s Bang Yai district.

Free shuttle buses will also be available at Victory Monument and the National Stadium, he said.
The drop-off points will be the Royal Turf Club, the Manangkhasila Mansion, Phitsanulok Mansion (the official residence of the prime minister), Wat Debsirin, Memorial Bridge, Somdet Phra Pinklao Bridge and Rama VIII Bridge. Mobile toilets will also be provided at the sites by the Bangkok Metropolitan Administration.
These sites will also include a royally granted mobile kitchen and mobile medical unit, so people can eat and have a health check before entering the ceremonial grounds. People will also get to peruse an exhibition on the coronation, while a student band will be present to entertain the crowds, Kraiboon said.
Those wishing to stay overnight can do so at the Thai-Japan Bangkok Youth Centre’s Kilawet Gymnasium and Buddha Monthon Park.

Free train rides to Bangkok’s Hua Lampong station will be provided for those travelling from Ayutthaya, Chachoengsao and Nakhon Pathom.
The Marine Department is also providing free boat rides on May 4 to 6 from 6am to 10pm. They include four rides on Chao Phya Express from Nonthaburi to Pinklao pier, four from Sathorn to Memorial Bridge pier, as well as free ferries to and from Thon Buri.
Screening checkpoints will be set up at Phan Fa Bridge, the Chalermkrung intersection and the Charoenrat Bridge, while 78 points will be set up to distribute drinking water.