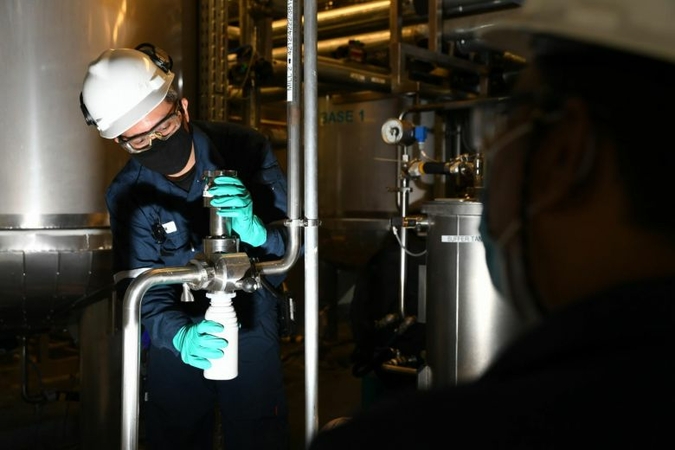 SINGAPORE - Manufacturing grew at a slower pace in August on the back of a weaker jobs market but the electronics sector stole the show by returning to expansionary mode after contracting for six straight months.

The August reading of the Purchasing Managers' Index (PMI) released on Thursday (Sept 3) came at 50.1 points, down 0.1 point from June, when it rose by 1.2 points. A PMI reading over 50 indicates expansion; one below shows contraction.

Electronics last exceeded the 50 threshold in January at 50.1 and just prior to the Covid-19 outbreak.

The January expansion was preceded by 14 months of contraction, mainly due to the United States-China trade war and the slowdown in the Chinese economy.

Manufacturing PMI in Singapore, which is in the midst of its worst recession since independence, has been on the mend since April, when the PMI dropped to 44.7 - the lowest level since November 2008 during the global financial crisis.

Gross domestic product (GDP) shrank by a record 13.2 per cent in the second quarter, with the manufacturing sector contracting 0.7 per cent year on year.

However, in the same quarter non-oil domestic exports (NODX) grew by 6.5 per cent.

UOB economist Barnabas Gan said the modest second-quarter drop in manufacturing, relative to GDP, and the surge in NODX suggested that economic growth may have hit a floor and the August PMI data backed that view.

"The expansions in both manufacturing and electronic PMIs signal that a recovery is taking place, and overall GDP is expected to improve relative to the contraction in the second quarter," he added.

August's manufacturing PMI was aided by more new orders and a faster rate of expansion in factory output, said the Singapore Institute of Purchasing and Materials Management (SIPMM), which compiles the monthly PMI report.

The jump in electronics PMI was attributed to first-time expansion readings for new orders, and factory output.

Ms Sophia Poh, SIPMM's vice-president for industry engagement and development, noted: "August PMI readings pointed to a silver lining in the electronics sector, which appeared to provide a needed boost for overall manufacturing."

However, the employment index for manufacturing PMI contracted at a faster rate from the previous month and contracted for the seventh month in a row.

Ms Ling said her third-quarter GDP growth forecast stands at minus 7.1 per cent year on year. UOB's Mr Gan expects full-year GDP to shrink by 5 per cent, which is the higher end of the official forecast of a 5 to 7 per cent contraction.