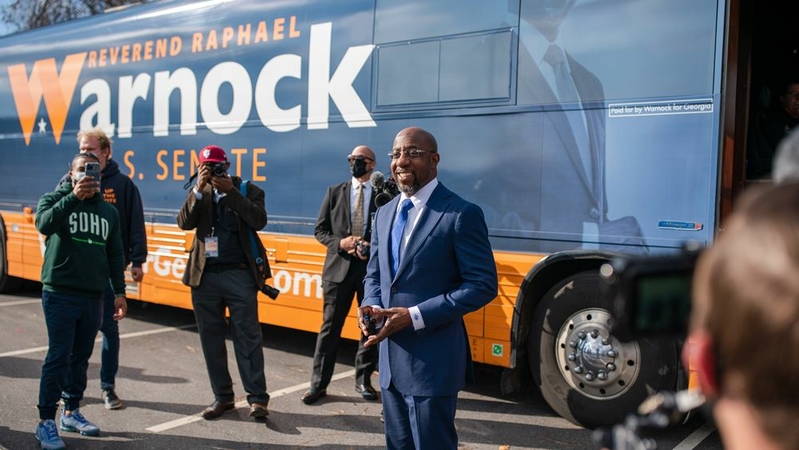 ATLANTA - Democrats closed in on control of the U.S. Senate early Wednesday with a stunning come-from-behind victory in one of Georgia's twin runoff elections and the lead in the second contest, races that could reshape the first two years of President-elect Joe Biden's term by giving Democrats a clearer path to enacting their legislative priorities.

After swapping leads over the course of the night Tuesday, Democrats Raphael Warnock and Jon Ossoff benefited from late counts in Democratic areas of the state, which gave Warnock an increasing lead over Republican Sen. Kelly Loeffler as the final precincts were counted. Edison Research called the race for Warnock early Wednesday.

Ossoff held a narrower lead over Republican David Perdue, whose Senate term expired Sunday. Most of the remaining ballots were believed to be from strongly Democratic areas.

The Warnock win - and the possibility of a second Democratic victory - represented a historic upset in a longtime Republican bastion, signaling a clear shift in the political makeup of the state that Biden won nine weeks ago. Warnock will be the first African American Democratic senator from a former Confederate state, and Ossoff, 33, would be the youngest newly elected Democratic senator since Biden in 1973.

The races also represented a forceful rejection of President Donald Trump in the final days of his term, and they raised questions about the central role the president has vowed to maintain in his party after his departure from office.

At stake in Tuesday's contests was the governing coalition Biden will enjoy in his first years in office. If both Democrats win, they would flip control of the Senate, with the tie-breaking vote of Vice President-elect Kamala Harris, opening the door for potential passage of legislation Democrats campaigned on over the past two years, including an expansion of federal health-care subsidies, a tax increase on the wealthy and a comprehensive immigration overhaul.

Trump had supported both Republicans in the race, most recently on Monday, calling Loeffler and Perdue close allies who were essential to holding back Democratic priorities.

But his efforts were complicated by his simultaneous decision to attack Republican officials in the state, his proposal to increase stimulus payments to $2,000, which was opposed by GOP Senate leadership and embraced by Democrats, and his false allegations that the 2020 elections in the state were rigged.

In a live-streamed address, Warnock claimed victory and thanked his supporters in an emotional address that noted he had received a vote from his mother.

"The 82-year-old hands that used to pick somebody else's cotton went to the polls and picked her youngest son to be a United States senator," said Warnock, a pastor at Atlanta's Ebenezer Baptist Church.

"We were told that we couldn't win this election," Warnock continued. "But tonight, we proved that with hope, hard work and the people by our side, anything is possible."

Ossoff's campaign manager, Ellen Foster, issued a statement early Wednesday expressing confidence that he would win because of the location of the uncounted ballots.

"We look forward to seeing the process through in the coming hours and moving ahead so Jon can start fighting for all Georgians in the U.S. Senate," she said.

As Democrats gained in the vote counts late into the night, Republicans indicated that they were not ready to concede.

"This is a game of inches. We're going to win this election," Loeffler said in a brief address to supporters in Atlanta near midnight. "It's worth it for this election to last into tomorrow."

Former Georgia governor Sonny Perdue, speaking on behalf of his cousin, David Perdue, who did not appear, also said the fight would continue in the morning.

Watching from the White House, Trump live-tweeted the results, repeatedly suggesting that the votes that favored Democrats were somehow fraudulent, though he presented no evidence.

"Just happened to have found another 4000 ballots from Fulton County. Here we go!" he wrote in one tweet, which was flagged by Twitter for sharing "disputed" information.

Loeffler and Perdue had closed out the campaign warning that unified Democratic control of the House, Senate and presidency would be catastrophic for the nation. Because of possible exposure to the coronavirus, Perdue had to finish the campaign with remote appearances.

"We have to STOP socialism. We have to PROTECT the American Dream," Loeffler tweeted after polling places opened. "We have to SAVE our country!"

Ossoff and Warnock, who reject the "socialist" label, closed the campaign promising dramatic changes in Washington, including the $1,400 increase to the $600 stimulus checks Congress approved last month, a surge in vaccine distribution, new civil rights legislation and an ambitious jobs and infrastructure bill. The Republican Senate had tabled the larger stimulus checks, holding to the lower level.

"This is history unfolding in Georgia right now," Ossoff said in a Tuesday morning appearance at a polling site in Atlanta. "Georgia voters have never had more power than you have today. That is the reason the whole world is watching us."

Republicans have a historical advantage in the traditionally lower-turnout runoffs in the state, and the Democratic Senate candidates ran behind both the victorious Biden and the combined votes of their Republican opponents in the first round of voting in November. They were given another chance because multicandidate fields prevented anyone from breaching the 50 percent threshold.

Both parties immediately repurposed their presidential campaign ground operations and flooded resources to the state, embracing the all-or-nothing stakes of the final two contests of the election season. The four candidates and their supportive outside groups spent nearly $500 million on television and radio advertising on the runoff races, with the Republicans attacking their opponents as radical liberals with untested biographies and the Democrats labeling the incumbents as representatives of the status quo who profited from private stock trades after receiving official briefings about covid-19.

To win their race, Democratic strategists said, they needed to repeat the strong November turnout among Black, Asian and Hispanic voters in the state while maintaining the anti-Trump margins they had received in college-educated suburban Atlanta communities. Republicans were counting on winning back some of the White, college-educated vote, with Trump off the ballot, while maintaining the high turnout that Trump had attracted in more rural parts of the state.

That effort has been complicated by the president, who offered passionate endorsements for both Republicans in the runoffs, while pursuing his own sometimes contradictory agenda to overturn the results of the 2020 election in Georgia and elsewhere, prompting concerns among Republican strategists that he would dissuade their voters from casting ballots. He also told Republican Secretary of State Brad Raffensperger in a call Saturday that if Biden's win in the state was not overturned, Republicans might stay home from the polls this week.

Trump's focus on the last election was an animating force for Republicans who traveled to campaign events in the closing weeks, with voters frequently repeating disproved conspiracy theories of a rigged November contest. Concerned that the misinformation would reduce turnout, Raffensperger's office staged a news conference Monday to plead with Georgians to disregard Trump's false arguments and vote in the runoff elections.

In a final Georgia rally Monday night, Trump showed no sign of giving up on his crusade against state Republicans, whom he blamed for not overturning Biden's win.

"I'm going to be here in a year and a half, and I'm going to be campaigning against your governor and your crazy secretary of state," Trump said in Dalton, where he endorsed Loeffler and Perdue as the "last line of defense" against Democratic control.

Trump's efforts to overturn the last election also became a rallying cry for Democrats, who hoped the president's continued involvement would drive their own turnout higher. When Biden traveled to the state Monday to campaign for the Democrats, he argued that Trump's effort to reverse the election result was a reason for voters to go to the polls.

"Politicians cannot assert, seize or take power," Biden said. "Power is granted by the American people, and we cannot give that up."

Preliminary exit polls found roughly 7 in 10 Georgia voters were confident that votes in Tuesday's runoff elections would be accurately counted. But there were sharp partisan differences, with about 3 in 4 Republican voters saying the presidential election in the state was not conducted fairly, compared with more than 9 in 10 Democrats who said the election was fair.

The Republican skepticism of the vote count marked a shift since Biden narrowly won the state in November. Then, network exit polling found that 92 percent of Republicans believed votes would be counted accurately, slightly higher than 79 percent of Democrats.

Before election sites opened Tuesday, Democrats had racked up a significant lead among early votes that gave hope to party strategists that they could win the state if GOP Election Day turnout disappointed. Polls in the state since the last election had consistently shown a tight race in both contests.

If Warnock and Ossoff are victorious, it will be just the second time in nearly three decades that two Democrats represent Georgia in the Senate.

Strategists and experts have attributed part of the escalating success of Georgia Democrats to a foundation of political organization powered by Stacey Abrams, who narrowly lost the 2018 gubernatorial race to Republican Brian Kemp, and the legion of activists who have since joined her cause. In 2016, Trump won Georgia by five points. Two years later, Kemp beat Abrams by about a point and a half.

Biden won the state in November by fewer than 12,000 votes, or about 0.2 percentage points, becoming the first Democrat since Bill Clinton in 1992 to carry Georgia.

Long lines formed early at polling places across the state Tuesday but dwindled throughout the day, and the secretary of state's office reported average wait times of just a couple of minutes by the afternoon. Officials said it was unclear whether short wait times reflected low turnout or an efficient process.

Bobby Caro, a 25-year-old first-time voter in Kennesaw, an Atlanta suburb, cast his ballot for Warnock and Ossoff on Tuesday morning. He described himself as "very new to politics" and said the drumbeat of advertisements about the runoffs convinced him he needed to register - that and the razor-thin margin in November.

"In the presidential election, I didn't vote; it got close, and I said, 'I almost didn't get what I want,' so I decided to do something now," Caro said.

This time around, he saw more enthusiasm from young people like him, and he voted for Democrats because he felt they had a more positive outlook on the country and its future.

At the same precinct, Jim Earwood, a 67-year-old retiree, said he appreciated Trump's ceaseless commentary on the Georgia election, from his early and uncorroborated claims of fraud to his weekend call to the secretary of state.

"I'm glad he's involved," Earwood said. "Everybody says he's not presidential, and that's what I like about him."

As he left the Christian church that served as a polling place, Earwood said he voted all Republican.

"I wouldn't vote for a Dem here lately unless they let Jesus on the ticket," he said.

Republican concerns about turnout were evident up to the final hours of voting, with Perdue and Loeffler releasing a joint statement Tuesday afternoon asking people to keep going to the polls, saying the election "could come down to the difference of just a few votes in a few precincts across the state."