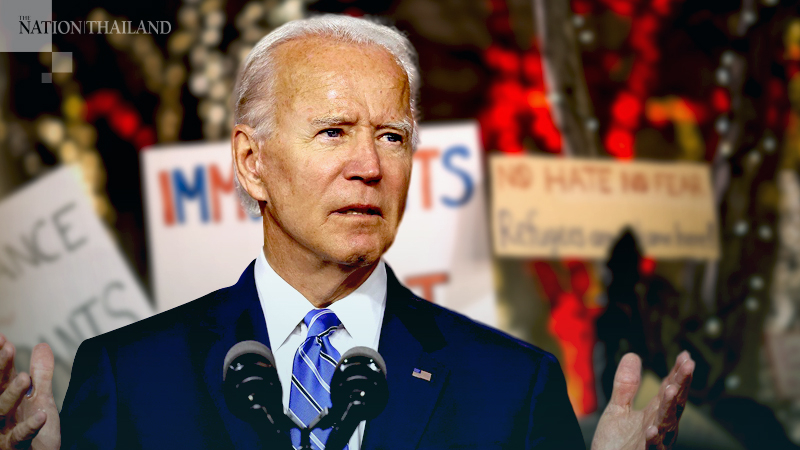 WASHINGTON - President-elect Joe Biden propose major changes to the nation's immigration laws the day he is inaugurated, including an eight-year pathway to citizenship for immigrants who do not have legal status and an expansion of refugee admissions, alongside an enforcement plan that deploys technology to patrol the border.

Biden's legislative proposal, which is expected to be sent to Congress on Wednesday, also includes a heavy focus on addressing the root causes of migration from Central America, a key part of Biden's foreign policy portfolio when he served as vice president.

The centerpiece of the plan from Biden and Vice President-elect Kamala Harris is the eight-year pathway, which would put millions of qualifying immigrants in a temporary status for five years, then grant them a green card once they meet requirements such as a background check and payment of taxes. They would be able to apply for citizenship three years later.

To qualify, immigrants must have been in the United States as of Jan. 1, a move meant to blunt any rush to the border.

Beneficiaries of the Deferred Action for Childhood Arrivals - which granted key protections for "dreamers" - and the temporary protected status (TPS) program for migrants from disaster-ravaged nations could apply for a green card immediately. The details were described by transition officials who spoke on the condition of anonymity because they were not authorized to speak publicly.

The president-elect's plan has received praise from pro-immigration advocates and Democratic lawmakers who have toiled to change the immigration system for decades. But it also comes at a time when the Republican Party, led by President Donald Trump, has shifted rightward on immigration, complicating efforts at a deal that can get enough GOP support.

In a significant contrast with the Obama administration - which was criticized by the Latino community for not tackling immigration when Democrats controlled the House, the Senate and the White House early in Barack Obama's presidential tenure - Biden has made immigration his chief legislative priority behind the immediate health and economic relief stemming from the ongoing coronavirus pandemic.

"Having leadership makes a big difference," Sen. Robert Menendez, D-N.J., said in an interview Monday. "You cannot achieve immigration reform without presidential leadership, and from what I see, the seriousness of their purpose to start off with gives me a real good feeling that the president-elect is actually going to use capital to try to make this happen."

The Biden effort would mark the most substantial attempt at a comprehensive immigration overhaul since the Senate passed legislation in 2013, only to have it collapse in the House, controlled by Republicans, the following year.

After that collapse, pressure from Democratic lawmakers and immigration advocates pushed Obama to issue a wide-reaching effort aimed at protecting parents of U.S. citizen children and green-card holders who were in the country illegally, but that action was promptly blocked in the courts.

Under Trump, the GOP-controlled Senate tried to pass various revisions to U.S. immigration laws, prompted by the outgoing president's attempt to cancel the temporary protections for the immigrants. Trump was ultimately rebuffed by the Supreme Court on his push to end DACA.

Biden's bill will have three overarching pillars, the transition officials said: provisions to address the causes of migration, border management and a path to citizenship.

The focus on Central America reflects the message that Biden has already relayed to senior officials in the region: that he will advocate for policy changes aimed at what drives scores of migrants there to come to the United States illegally to seek safe harbor.

"Ultimately, you cannot solve problems of migration unless you attack the root causes of what causes that migration," said one official, pointing to the various reasons - from economic to safety - that drive migrants to flee their home countries. "He knows that in particular is the case in Central America."

Transition officials are aware of recent reports of the increased numbers of migrants at or heading to the border in anticipation of the end of Trump's presidency, and urged them to stay in their home countries. They emphasized that newly arriving immigrants would not qualify for the legalization program that Biden proposes.

Biden wants to move the refugee and asylum systems "back to a more humane and orderly process," said the official. But "it's also been made clear that that isn't a switch you flip overnight from the 19th to the 20th, especially when you're working with agencies and processes that have been so gutted by the previous administration."

The president-elect hopes to reinstate a program granting minors from Central America temporary legal residence in the United States. The Trump administration terminated the program in August 2017, officials said. The administration also wants to set up a reunification program for Central American relatives of U.S. citizens that would allow those who have been approved for U.S. residency to be admitted into the country, rather than waiting at home for an opening. The program would be similar to ones that existed for Cubans and Haitians but were also ended by the Trump administration.

The Biden proposal would also put in place a refugee admissions program at processing centers abroad that would better help identify and screen those who would qualify to be admitted as refugees into the United States.

As for border enforcement, the plan calls on the Department of Homeland Security to develop a proposal that uses technology and other similar infrastructure to implement new security measures along the border at and between ports of entry. Biden has long vowed not to expand the border wall Trump has extended.

"This is not a wall, this is not taking money from [the Department of Defense]," a transition official said, referring to how Trump helped to finance his wall, after pledging that Mexico would pay for it. "It's a very different approach."

The legislation from the Biden White House also will contain several revisions to the legal immigration process, according to transition officials.

It would bolster the number of key employment- and family-based visas available, by recapturing unused visas from previous years and exempting spouses and children of green-card holders from quotas that restrict immigrants from immediately entering the country.

It also would grant work permits for spouses and children of temporary worker visa holders, though the number of available H-1B visas (for high-skilled foreign workers) and H2-B visas (for lower-skilled nonagriculture workers) would not be expanded, officials said.

Doctoral graduates in the science, technology, engineering and mathematics fields are also exempted from visa limits that critics say have led to talented immigrants moving elsewhere in the world, depriving the United States of their ingenuity.

The incoming administration has already said Biden will issue a flurry of executive orders on his first day, including one that would repeal the ban on citizens of some majority-Muslim nations from entering the United States. In another potential executive action, the Biden administration plans to review TPS programs "across the board" to see which programs ended by the Trump White House - including benefits for immigrants who fled from El Salvador, Nicaragua or Haiti - could be reinstated.

Transition officials declined to rule out other immigration executive actions if attempts at legislating fail, but they stressed that only Congress can implement certain changes, such as a path to citizenship.

"The president-elect supports resources that are there, and his secretary of homeland security will use them in a smart and humane way," said another official. "But we really need Congress to step up."

To win passage, the administration would have to retain all Democratic votes as well as persuade at least 10 Republican senators to cross the aisle. Some proponents of the 2013 effort - such as Sen. Lindsey Graham, R-S.C., and Marco Rubio, R-Fla. - remain in the Senate, though many others have since left.

Under Trump, Republican lawmakers favoring a more restrictive immigration system have gained a larger platform and, along with the president, have pushed measures limiting not only illegal but legal migration into the United States.

"He's unveiling his draft immigration bill this week, and it's what you'd expect from the party of open borders: Total amnesty, no regard for the health or security of Americans, and zero enforcement," Sen. Tom Cotton, R-Ark., tweeted Monday. "Let's be clear: Joe Biden is prioritizing amnesty ahead of the pandemic or getting Americans back to work. We can't let him get away with it."

Menendez, who worked on the 2013 immigration effort, said he believed the proposal from the incoming Biden administration was "definitely" more liberal than the compromise he helped negotiate as part of the "Gang of Eight," which ultimately included a surge of border security resources that advocates said was too draconian.

"The Biden-Harris administration is going to be strong partners in helping undo a lot of the Trump administration's cruel and divisive immigration policy over the last four years," he said.