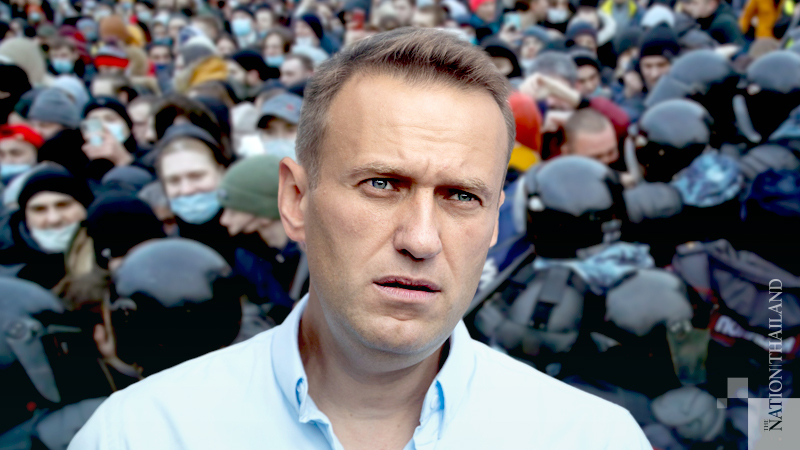 Russia cracks down on Navalny protests, locking down city centers and arresting thousands

MOSCOW - The Kremlin responded to a second straight weekend of protests on Sunday with a violent crackdown, arresting thousands in a show of Moscow's unease at the growing unrest triggered by the treatment of jailed opposition leader Alexei Navalny.

A week after tens of thousands of Russians joined demonstrations in more than 100 cities throughout the country, authorities moved to stem Sunday's rallies before they started, using more aggressive tactics.

But thousands came out despite the threat of arrest - the turnout in some Russian cities was believed to be higher than a week ago - boosting the opposition's hope of a sustained movement.

Hours after protests began in Russia's two largest cities, Moscow and St. Petersburg, the monitoring group OVD-Info reported that more than 5,000 people had been detained throughout the country, more than were arrested last Sunday. Navalny's wife, Yulia, was arrested again.

To head off an afternoon protest planned for Moscow, the city shut down seven Metro stations four hours in advance, told stores and restaurants to close and blocked several roads around the Kremlin, sealing off much the capital's center.

Police with black helmets and batons were posted along side streets, and they set up checkpoints and restricted people from passing. Large vehicles belonging to Russia's National Guard parked in front of the famed Bolshoi Theatre; police trucks lined up outside of Moscow's luxury department store, Tsum.

In an effort to defeat the authorities' blockade, Navalny's team announced a new meeting point, about a mile from the original location of Lubyanka Square.

The choice of Lubyanka had been symbolic: It's in front of the headquarters of the Federal Security Service, the agency that Navalny has said was ordered by President Vladimir Putin to poison him. Navalny took ill during a trip to Siberia in August; Putin has denied involvement. "Who needs him, anyway?" Putin asked a news conference last month. "If we had really wanted, we'd have finished the job."

Navalny was flown to Germany to recover; he returned to Russia this month and was arrested soon after his arrival.

With movement around Moscow heavily restricted Sunday, turnout was smaller than last week's estimated 40,000. Those who did come out weren't exclusively Navalny supporters; some said they wanted to express their unhappiness with the Russian government.

"They are afraid that they'll lose power and they will have to live in this poor country that they have robbed."

Security forces using megaphones to threaten arrests competed with the honking support of passing cars. As people were detained, the demonstration simply moved to a new location - with police buses right behind them.

Protesters steadily made their way to Matrosskaya Tishina, the pretrial detention center where Navalny is being held. Some traced "Svoboda" - the Russian word for "Freedom" - into snow-covered parked cars.

In a repeat of last week's events, Yulia Navalnaya was again detained. A squad of heavily armored riot police snatched her out of the crowd and bundled her into an unmarked black van with tinted windows that then sped off.

In St. Petersburg, police used stun guns and batons to corral and detain protesters. Journalists, identifiable in neon yellow press vests, were among those knocked down and forcefully carried off. As riot police formed a wall before protesters and banged on their shields, the demonstrators clapped defiantly in response, videos posted to social media showed.

In Chelyabinsk, more than 1,000 miles east of Moscow, one man shouted that he "can't breathe" as security forces pinned him to the ground.

"The U.S. condemns the persistent use of harsh tactics against peaceful protesters and journalists by Russian authorities for a second week straight," Secretary of State Antony Blinken tweeted Sunday. "We renew our call for Russia to release those detained for exercising their human rights, including Aleksey Navalny."

Seven thousand people turned out in Yekaterinburg, near the Ural Mountains, which was more than last week's turnout. Protesters in the Far East city of Vladivostok danced in a large circle over the frozen Amur Bay and chanted: "My Russia is in prison."

Protesters were again undeterred by the bitter cold. The temperature was 45 degrees below zero Sunday in Yakutsk, considered the world's coldest city; a small group walked around the snow-covered main square. In Siberia's Krasnoyarsk, where it was 22 below, protesters held hands and sang the Russian national anthem. Later, riot police surrounded the crowd on all sides, according to a photo posted on Twitter.

After about 4,000 people were detained in connection with the Jan. 23 rallies, the turnout in most cities on Sunday appeared to be lower.

A Moscow court last week denied Navalny's appeal for release from pretrial detention. In an apparent effort to quiet protest organizers, five of his allies were detained for allegedly violating coronavirus regulations at last weekend's demonstrations and were placed under house arrest until March 23.

Sergey Smirnov, the editor in chief of Russia's independent Mediazona news outlet, was detained on Saturday while out with his young son. He was accused of breaking protest regulations with a retweet. He was released Saturday evening amid a rising backlash on social media; he's scheduled to appear before a court Wednesday.

In a message posted on Navalny's website Thursday, he said the state television channels to which he has access to in jail described the protests as "a couple small rallies held in a couple cities."

"It seems to me it was not at all like that," Navalny said. He said people are afraid, but they also know "you can't put everyone in prison."

"Come on out, don't be afraid of anything," he said. "Nobody wants to live in a country where tyranny and corruption reign. The majority is on our side."

Navalny will have another opportunity to galvanize support on Tuesday, when he is scheduled to appear in court for allegedly violating the terms of his probation from a 2014 embezzlement case while he was recovering from his near-fatal poisoning abroad. He returned to Russia on Jan. 17 but was arrested before passing border control at the airport.

Navalny has managed to rattle the Kremlin even from behind bars. His recent "Putin's Palace" video investigation into a palatial billion-dollar Black Sea estate allegedly built for Putin through a complex slush fund has eclipsed 100 million views on YouTube.

As an indication of the video's impact - owning an opulent mansion was an especially bad look in a week when the state statistics agency reported that nearly 20 percent of Russians live below the poverty line - Putin took the unusual step last week of personally denying that he or his close relatives own the property.

Some protesters on Sunday held up toilet brushes, a reference to the golden ones worth $850 allegedly purchased for the palace.

Navalny aide Leonid Volkov said the Russian people were not fooled. "Putin and the Kremlin consider Russian citizens a bunch of manipulated imbeciles," he tweeted. "We don't think so."

Katya Volobuyeva, a 20-year-old university student, said Sunday's protest in Moscow was the first unsanctioned one she had ever attended, "because it's impossible to live the way we do in this country, because they tried to murder a person because of what he said, and because they build huge palaces with our taxes.

"They are so afraid of us that they blocked the whole city off," she said. "My mom knows that I'm here and agrees with it, but she's worried about me."