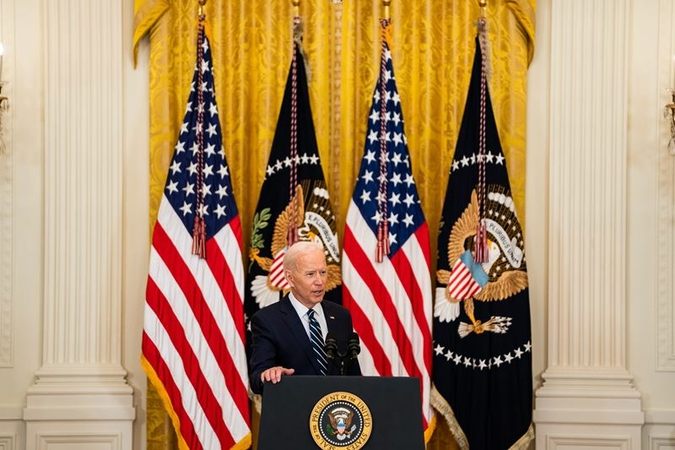 Biden promises to tackle the nation's crises, but says some may wait

WASHINGTON - President Joe Biden on Thursday set a hierarchy for the country's numerous crises, pledging to administer 200 million coronavirus vaccine shots by the end of April, repair the country's infrastructure and move aggressively to expand voting rights - while presenting guns and immigration as secondary priorities.

In his first presidential news conference, Biden outlined a sort of triage, signaling that his focus for now is chiefly on addressing the pandemic and embarking on a push to rebuild roads, bridges and technology. He said most middle and elementary schools are on pace to open in the next five weeks, that he "can't picture" troops being in Afghanistan in a year, and that he expects to seek reelection in 2024.

Much of the hour-long session was taken up with a discussion of the border, heated at times, as Biden rejected the notion that more migrants are coming because they have heard he is a "nice guy," though lawmakers and experts have cited his welcoming rhetoric as a contributing factor. He blamed the Trump administration's policies, saying they left him at a disadvantage, and said he has not traveled to the border because he felt it would be a distraction.

Biden made specific commitments on several fronts, such as the vaccination pledge, but was more vague on other topics, notably when he would seek to take up gun and immigration laws, calling them "long-term problems" to be addressed one at a time. The surge of migrants and the eruption of two mass shootings days apart have inflamed the national conversation, but Biden signaled he would not let that alter his timetable.

The president has yet to respond to pressure to issue executive orders tightening firearms laws or to deliver on a campaign promise to send gun-control legislation to Capitol Hill.

"It's a matter of timing," said Biden. "As you've all observed, successful presidents - better than me - have been successful in a large part because they know how to time what they're doing. Order it, decide on priorities, what needs to be done."

An evenly divided Senate has emerged as the biggest impediment to Biden's agenda and on Thursday, he offered his strongest indication yet that he is open to doing away with the chamber's 60-vote threshold on most legislation, known as the filibuster. But he stopped short of endorsing that, touting a more a modest reform but saying that if gridlock cannot be broken, "then we'll have to go beyond what I'm talking about."

Democrats are increasingly worried that despite having control of Congress and the White House, they will lose their chance to enact legislation on priorities they have long championed - climate change, immigrations, guns, voting rights and the minimum wage. The House is steadily stacking up a pile of bills at the Senate's doorstep that Republicans are poised to block in the Senate.

The questions Biden faced on Day 65 of his presidency reflected the rapidly shifting slate of problems he is confronting. He faced no questions on the pandemic, an issue that has dominated the campaign and Biden's early presidency, culminating in a $1.9 trillion relief bill he signed into law this month. He touted the $1,400 direct payments that have been distributed under that law.

Before taking questions, Biden announced that he was doubling his earlier goal of getting 100 million shots in people's arms in his first 100 days - a goal he has already met. More than 133 million doses have been administered so far, according to data from the Centers for Disease Control and Prevention, and the country is on track to meet Biden's revised goal.

"No other country in the world has even come close - not even close - to what we are doing. I believe we can do it," Biden said. He called his goal "ambitious," but vaccinations have accelerated to a point that his new target is well within reach.

Earlier Thursday, the White House announced a commitment of nearly $10 billion to address inequities in vaccine coverage based on race, income and geography, a discrepancy that has bedeviled health officials overseeing the immunization effort.

Biden said he was on pace to meet a goal he set of opening a majority of elementary and middle schools within his first 100 days. "We're really close, and I believe in the 35 days left to go we'll meet that goal as well," he said.

As president-elect, Biden promised in December that "the majority of our schools can be open by the end of my first 100 days," a target that he and his advisers have shifted several times since.

With the pandemic relief bill enacted, Biden said his "next major initiative" - to be unveiled next week - is to "rebuild both physical and technological infrastructure of this country, so that we can compete and create significant numbers of really good-paying jobs."

White House officials have been preparing a roughly $3 trillion plan that is expected to be divided into two parts - one directly tackling infrastructure and a second focusing on other domestic priorities. That emerging package includes liberal goals such as free community college and universal prekindergarten.

Recent days have seen a collision of sorts between the tasks Biden has promised to tackle from the outset - the pandemic and the economy - and long-running problems that have erupted in unforeseen ways. Democrats and Republicans have struggled for decades to tackle gun violence and immigration reform, and Biden is clearly content to confront them in good time.

But the situation on the border has become more pressing, as Biden struggles to deal with two related challenges: a huge increase in migrants arriving at the border, many of whom are being turned away, and the need to house and care for thousands of unaccompanied children.

Biden framed the decision to accept children as a moral one, promising not to let young would-be migrants starve on the other side of the border. He repeatedly slammed former president Donald Trump's hard-line policies, including separating families from their children.

While some current and former government officials have said Biden's pledges to create a more humane system are fueling the rise in the number of people arriving at the border, the president pointed to other factors, including a desire by many people to arrive before hot summer weather as well as poor economic and social conditions in Central America.

"I guess I should be flattered people are coming because I'm the nice guy, that's the reason why it's happening," Biden said sarcastically. He added, "Does anybody suggest that there was a 31 percent increase under Trump because he was a nice guy and he was doing good things at the border? That's not the reason they're coming."

Biden said his administration was trying to expand its capacity to care for children. But officials have struggled to do so, leading to overcrowding and processing delays. There are more than 11,000 children under Department of Health and Human Services custody and nearly 5,000 more in U.S. Customs and Border Protection jails, according to government data released Wednesday. The number of children in the care of CBP is nearly twice the previous record.

Biden pledged to ramp up efforts to move children out of overcrowded CBP detention centers more quickly and improve the overall situation in short order. "They'll get a whole hell of a lot better real quick or we're going to hear some people leaving. OK?" he said.

Biden became most visibly animated when he condemned efforts by Republican legislatures nationwide to pass voting-restriction measures. His voice boomed across the East Room of the White House as he denounced the efforts as "sick."

He added: "This makes Jim Crow look like Jim Eagle."

Biden vowed to push the Senate to pass voting-rights legislation, but that could be an all-but-impossible task because of heavy Republican resistance.

Democrats used a budget maneuver known as reconciliation to pass Biden's pandemic relief bill with a simple majority - and may seek to pass an infrastructure bill the same way - but other legislation will require 60 votes under Senate rules.

Biden said he believes the filibuster is a relic of the Jim Crow era and that he is willing to go beyond his current call to make it tougher for senators to stage filibusters "if there's complete lockdown and chaos as a consequence" of the status quo.

He paused for several moments when pressed why he the filibuster should not be immediately abolished. "Successful electoral politics is the art of possible," Biden said. "Let's figure out how we can get this done and move in the direction of significantly changing the abuse of even the filibuster rule first."

The filibuster also stands in the way of Biden passing his comprehensive immigration bill, and it represents huge hurdles to placing new restrictions on guns.

"The other problems we're talking about, from immigration to guns and the other things you mentioned are long-term problems. They've been around a long time. And what we're going to be able to do, God willing, is now begin one at a time to focus on those as well," Biden said.

Asked whether he has made a decision about sending Congress a manufacturer liability bill like he promised during the campaign to do on Day 1 of his presidency or issue executive orders such as regulating so-called "ghost guns," which his aides have considered, Biden replied, "All of the above." But he quickly added, "It's a matter of timing," and made clear his next big priority is infrastructure.

Biden also addressed his own political future, though he gave less-than-definitive answers to questions about whether he would run for a second term in 2024, saying first that it was his "expectation" to do so, but later adding that he rarely plans big decision years in advance.

"I'm a great respecter of fate," Biden said. "I've never been able to plan four-and-a-half to three-and-a half years ahead for certain."