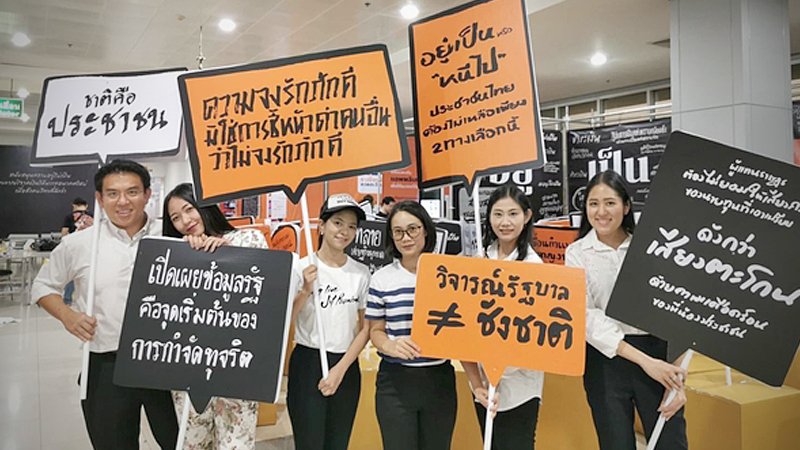 The Future Forward Party has started to campaign “Against the Tide” (yu-mai pen inThai) in an effort to stem further political polarisation between conservative and liberal voters.

Party leader Thanathorn Juangroongruangkit, newly named among the world’s 100 most influential people of 2019 by Time magazine, launched the campaign on Saturday (November 16) with a rally at which the party’s ideals and aims were highlighted.
Its key message is that it intends to honour election-campaign promises to restore democracy lost in the 2014 military coup and abolish mandatory military conscription.
The party also is determined to defend itself against allegations that its members “hate their own nation”.
“Criticising the government is not equivalent to hating the nation,” one party banner read.

Another vow is to convey the message that there is a third option beyond ignoring injustice at home and abandoning the country to live elsewhere.
This appeared to be a response to conservative posts on social media suggesting that anyone who dislikes the way Thailand is run is welcome to leave.
A keen observer contacted by The Nation expressed doubt that the “Against the Tide” campaign would impress anyone other than Future Forward’s supporters.
Titipol Phakdeewanich, dean of political science at Ubonratchathani University, said the party should instead appeal directly to its foes.
“They could do this by presenting the facts, but they shouldn’t politicise everything,” he said.
He suggested that key leaders such as party spokeswoman Pannikar Wanich should tone down their public statements. She often uses language that is “too strong” and might be interpreted as extreme or offensive, Titipol said.
And the party should disdain “public relations” pitches such as circulating a photo of Thanathorn washing dishes, he said. Everyone knows he’s a billionaire.
But Titipol agrees that Thanathorn deserved a place on Time’s list of influential people. “He inspires the young people and it’s very good that we have him.”
He disagrees with self-exiled academic Pavin Chachavalpongpun’s frequent ferocious attacks on Thanathorn and other party members for perceived shifts in political ideology.
Pavin has said Future Forward lacks firmness in fighting against military suppression and in favour of freedom of expression, especially when it comes to speaking out on the role of monarchy.
“I think they have done their best under the current circumstances,” Titipol said.
The reaction to the party’s new campaign from the Phalang Pracharat Party, which leads the ruling government coalition, came from its spokesman, Thanakorn Wangboonkongchana.
He warned Future Forward not to mobilise people to protest in the streets.