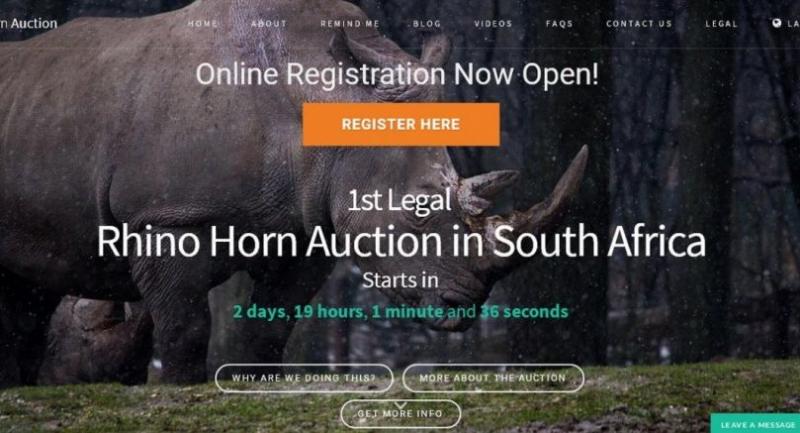 JOHANNESBURG - South Africa said Friday it would oppose an online auction of rhino horns due to start next week, as outraged conservationists said the sale would undermine the global ban on rhino trade.

The three-day auction by South African John Hume, who runs the world's biggest rhino farm, comes after a ban on domestic trade in the country was lifted three months ago.
The government said it would fight Hume's court application to be granted sale permits.
"The Minister of Environmental Affairs is opposing the application," the government said in a statement on Friday, declining to comment further.
Hume's lawyer Izak du Toit claimed the permits had already been approved -- but not issued.
"We will go to the High Court on an urgent basis," du Toit told AFP, ahead of the auction due to start on Monday.
Hume and some other campaigners say poaching can only be halted by meeting the huge demand from Asia through legally "harvesting" horn from anaesthetised live rhinos.
He has stockpiles of six tonnes of horns and wants to place 500 kilogrammes under the hammer.
South Africa is home to around 20,000 rhinos, some 80 per cent of the worldwide population, but in recent years has suffered record slaughter by poachers.
Rhino horn is composed mainly of keratin, the same component as in human nails.
It is sold in powdered form as a supposed cure for cancer and other diseases -- as well as an aphrodisiac -- in Vietnam and China.
While any auctioned horn could not exported from South Africa, conservationists fear the sale will stimulate black market demand and undermine the four-decade old international ban on rhino trading.
The auction website is in English, but also in Chinese and Vietnamese.
Currently a rhino horn is estimated to fetch up to $60,000 a kilo on the black market -- more than the price of gold or cocaine.
Joseph Okori, of the International Fund for Animal Welfare (IFAW), described the auction as "deplorable".
"There is deliberate motive to target people in countries where people consume rhino horns," Okori told AFP.