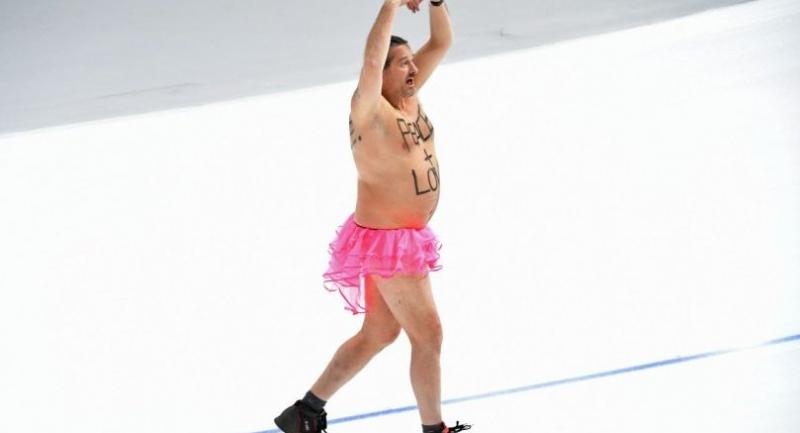 A shirtless man clad in a pink tutu hopped over a railing and did a little dance on the ice at the Pyeongchang Winter Olympic Games on Friday (Feb 23), tickling many in the audience and on the Internet.

The man appeared with the words "Peace + Love" emblazoned on his chest after the men's 1,000m speed skating medal ceremony at the Gangneum Oval in Gangneum.

Photos show him running across the ice, and even attempting a pirouette.

Time magazine has identified the man as British-based Mark Roberts, who has pulled similar stunts at more than 500 events worldwide.
An Instagram user, who was watching an interview of the ceremony on television, recorded the moment when Roberts climbs across the railing and undresses to reveal his tutu.

As he begins his routine, he takes a hard fall on the ice, but quickly picks himself up.

He was later shown in photos being escorted away by Olympics officials.

On the Instagram post, one user commented that it was a shame Roberts could not spread his message a little more tastefully considering it was the Olympics.

However, several others found humour and even inspiration in the situation. "Not all heroes wear capes. Some wear tutus," a Twitter user wrote.//AFP