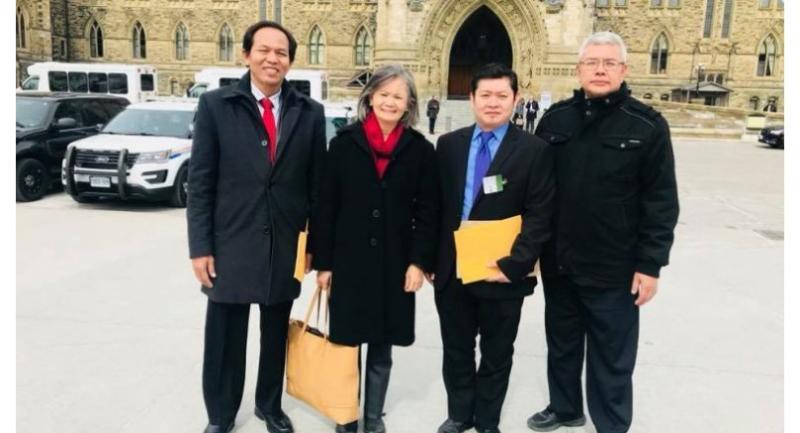 Sochua fled Cambodia following the September arrest of opposition party leader Kem Sokha on charges of treason after receiving word from a government official that her own arrest was imminent. Their party – the Cambodia National Rescue Party (CNRP), the nation’s only credible opposition – was forcibly dissolved by the Supreme Court just over a month later.
Speaking in Ottawa on Tuesday (yesterday Thailand time), Sochua repeated calls for targeted sanctions, warned foreign investors not to pour their money into the country, asked for a special Canadian delegation to visit Cambodia and pressure on lawmakers.
“Your money is not safe,” she said of Canadian investors in Cambodia. “You are contributing to the disaster, to the death of Cambodia as far as democracy is concerned.”
She spoke of Prime Minister Hun Sen’s determination to hold the national election on July 29 and urged Canada to take “immediate” action, as parties wanting to register for the election must do so by the end of April.
“We don’t have actually four months. We have four weeks. But yet, it doesn’t mean time is up … The election day can be pushed back,” she said.
“We want to go back so we can put Cambodia back on track. We have no more time to lose.”
She further urged Canada and others in the international community to disavow the legitimacy of an unfair election.
“The government of Cambodia that is born from that kind of election will not be recognised,” she said.
Government spokesman Phay Siphan said it was highly unlikely the election date would be shifted, as the premier had publicly committed to holding the national poll at the end of July.
“No delay at all. The prime minister said it,” Siphan said.
He added that Sochua’s appeal to Canadian investors “won’t work”.
“Investors, they really like to invest in Cambodia because of stability, because of peace,” he said.
Kingsley Abbott, from the International Commission of Jurists, also addressed the subcommittee about the “crisis” unfolding in Cambodian courts and the weaponisation of the law to achieve political ends.