"I have dreamt about this moment since I was a child, but going to space was more magical than I ever imagined," Richard Branson tweets after the flight.

The mission, dubbed "Unity 22," was the company's fourth crewed spaceflight, and the 22nd flight test for the company's spacecraft VSS Unity.

It was also the first to carry a full crew of two pilots and four mission specialists in the cabin, including founder of Virgin Galactic Richard Branson, who was testing the private astronaut experience.

The crew took off from the company's homeport of Spaceport America in U.S. state of New Mexico Sunday morning. The spacecraft, VSS Unity, achieved a speed of Mach 3 after being released from the mothership, VMS Eve, and reached space at an altitude of 53.5 miles.

One and a half hours after take-off, the spaceship touched down safely at Spaceport America.

The "Unity 22" mission focused on cabin and customer experience objectives, including evaluating the commercial customer cabin with a full crew, demonstrating the conditions for conducting human-tended research experiments, and confirming the training program at Spaceport America supports the spaceflight experience, according to the company.

"I have dreamt about this moment since I was a child, but going to space was more magical than I ever imagined," Branson tweeted after the flight.

Following this flight, the team will complete inspections of the vehicles and an extensive data review. Two additional test flights are planned before the company expects to commence commercial service in 2022.

Virgin Galactic is not alone in trying to build space flight business. Blue Origin is also planning a manned flight to space on July 20 that will include its founder Jeff Bezos.

Unlike SpaceX or Blue Origin, which put passenger capsules atop vertically launched rockets, Virgin Galactic uses a custom carrier aircraft that totes its rocket-powered spaceplane to an elevation where it is released. Then the rocket plane's motor ignites and blasts its way toward space. 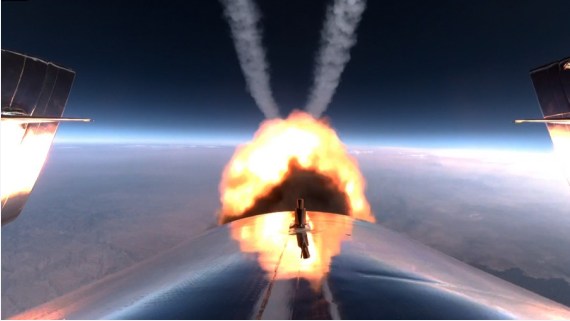