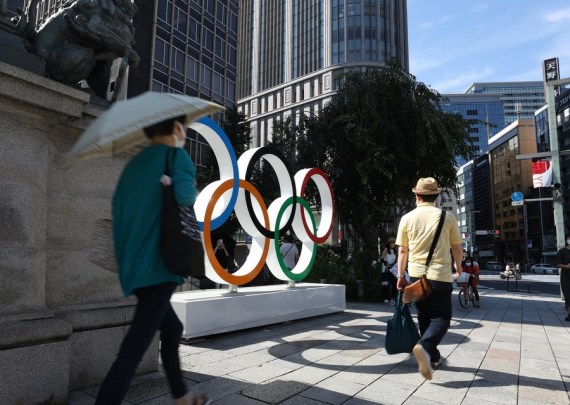 The number of new confirmed cases in Tokyo reached 3,177 for the first time in a single day, the Tokyo Metropolitan Government announced.

Olympic organizers have pledged to perform strict restrictions for "safe and secure" games and emphasized that the number of infection cases among athletes and others associated with the sporting events is very low, while a fifth wave of the pandemic stimulated by the highly contagious Delta variant is putting pressure on hospitals in the Olympic host city.

The Japanese government has placed Tokyo under a fourth state of emergency from July 12 to Aug. 22, as restaurants and bars are required to stop offering alcohol and close early.

SEOUL -- South Korea's daily cases hit a new record high as the fourth wave of outbreaks raged both in the capital and non-capital areas.

The country reported 1,896 more cases, raising the total number of infections to 193,427, according to the Korea Disease Control and Prevention Agency (KDCA).

Of the new cases, 568 were Seoul residents. The number of infected people residing in Gyeonggi province and the western port city of Incheon was 543 and 101 respectively.

The combined figure of 1,212 spotted in the greater Seoul area accounted for 66.5 percent of the locally transmitted cases.

Four more deaths were confirmed, leaving the death toll at 2,083.

Additional 43,856 recovered patients were discharged from hospitals, raising the total number of recoveries from the pandemic in the Southeast Asian country to 2,640,676, according to the ministry.

At present, the Indonesian government is implementing multi-tiered community activity restrictions, known locally as PPKM, on the country's most populated island of Java and the resort island of Bali as well as several municipalities outside the two islands.

NEW DELHI -- India's total tally rose to 31,484,605 with 43,654 newly-registered cases during the past 24 hours across the country, showed the federal health ministry's latest data.

Besides, as many as 640 deaths due to the pandemic since Tuesday morning took the total death toll to 422,022.

The death toll climbed to 27,401 after 84 more patients died from the viral disease, the DOH added.

The confirmed cases in 11 areas in Metro Manila, home to over 13 million people, have increased, the DOH said, adding it is closely monitoring the virus clusters in these areas with "positive two-week growth rates."

The NCOC said that the country's number of overall confirmed cases has risen to 1,015,827, including 935,742 recoveries, adding that the positivity rate of infections was recorded at 7.88 percent.

The COVID-19 claimed 44 more lives across the country in the last 24 hours, taking the death toll from the disease to 23,133, the NCOC said, adding that 2,898 people are in critical condition.