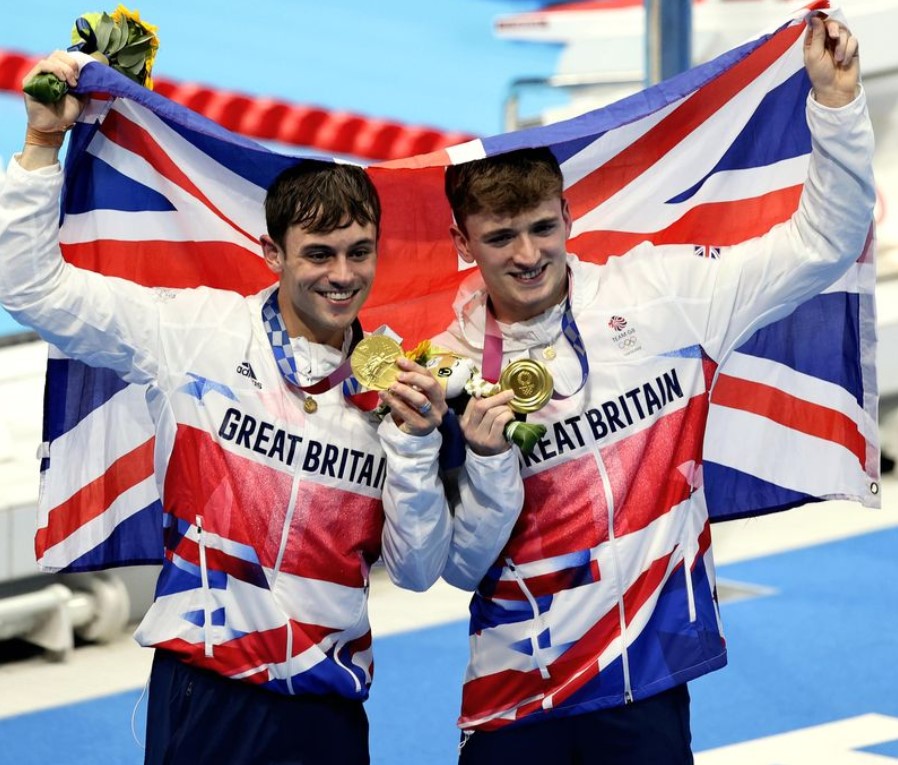 A record number of athletes who openly identify as LGBT are competing at the Tokyo Games, which are being conducted under the banner of “diversity and harmony.”

Their inspiring showing at the Games has supporters cheering not only their athletic achievements, but also their contributions toward eliminating discrimination and prejudice against sexual minorities in a wider society that has been slower to embrace such individuals outside of the sporting arena.

“I feel incredibly proud to say that I’m a gay man and also an Olympic champion,” said Thomas Daley, 27, during a press conference after winning gold for Great Britain in the synchronized 10-meter platform dive on July 26.

Daley is married to a U.S. playwright. The couple has a 3-year-old son, who Daley has called “my biggest support.”

Olivier Fabre, a 54-year-old French journalist residing in Japan, was among many encouraged by Daley’s remarks. Fabre also works at “Pride House Tokyo Legacy,” a project launched in Shinjuku Ward, Tokyo, last October, with the aim of springboarding off the Tokyo Olympic and Paralympic Games to spread information on the intersection of sports and the LGBT community.

Fabre, who has lived in Japan since childhood, felt unable to come out as gay when he was younger. It was not until he was nearly 30 that he felt at last ready to come out to those close to him, after encountering greater diversity in the world, when traveling back and forth between Japan and overseas on business.

“I was deeply moved to see that times have changed and gold medalists can now proudly articulate these things on a public stage,” said Fabre. “I think that it will give an encouraging boost to those who are still suffering silently.”

According to “Outsports,” an online news platform focusing on LGBT issues, at least 179 openly LGBTQ athletes were competing in the Tokyo Games as of Sunday — triple the 56 known to have competed in the Rio de Janeiro Games in 2016. Most of the out athletes are from North America and Europe.

The Tokyo Games are also the first to field an openly transgender athlete.

Weightlifter Laurel Hubbard, 43, made history as the first Olympian to compete in an event under a different gender from the sex they were assigned at birth. After formerly competing in men’s weightlifting, Hubbard underwent sex reassignment surgery at the mid-30s age, and represented New Zealand in the women’s 87-kilogram category on Monday night.

Kyoko Raita, a professor at Chukyo University who researches sports and gender, said the International Olympic Committee revised its guidelines in 2004 to allow transgender athletes to compete, on the condition that they have undergone sex reassignment surgery and satisfy hormone eligibility requirements.

In 2015, the surgery clause was removed, said Raita, who also serves on the executive board of the Tokyo Organizing Committee of the Olympic and Paralympic Games.

However, few athletes in Japan openly identify as LGBT.

Fumino Sugiyama, 39, a former member of Japan’s national women’s fencing team, came out as a transgender man only after retiring from the sport. Sugiyama recalled, “I worried whether the team and fencing association would be able to understand my being a sexual minority.”

The success of such athletes has larger ramifications for the LGBT community outside the sporting world. In a Lifenet Insurance Co. survey of about 10,000 sexual minorities conducted by Yasuharu Hidaka, a professor at Takarazuka University who specializes in social health, half of the teenage respondents reported experiencing bullying.

The survey also found that nearly 80% of the adults surveyed have been the target of discriminatory remarks at the workplace.

At Pride House Tokyo Legacy, messages from athletes and allies are on display as staff members offer consultations to members of the LGBT community on issues related to their careers and health.

“People have been saying they have nowhere to turn for advice, especially now that there are fewer opportunities for people to meet up and talk amid the pandemic,” said Gon Matsunaka, 45, head of Pride House Tokyo. “We would like to continue our activities even after the Games have ended, so that our society can become more understanding of LGBT issues.”