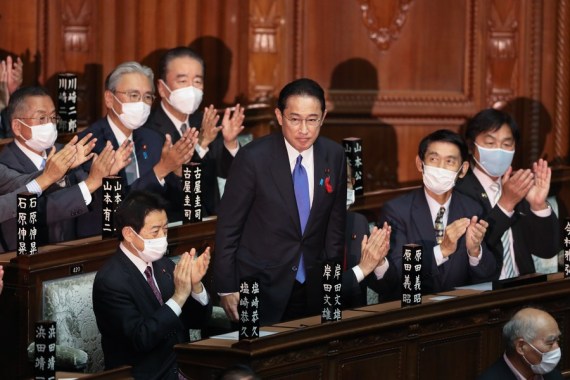 "This is the real starting point. I will go forth with a strong sense of determination, with a strong resolution," he said at the LDP's headquarters in Tokyo in the morning.

In his cabinet, Kishida appointed 13 first-timers of the ministerial post, including economic and fiscal policy minister Daishiro Yamagiwa and Takayuki Kobayashi, who would take a new post for economic security with a responsibility to craft a national strategy designed to end the drain of intellectual property from Japan.

Kishida's first major test as prime minister will be the upcoming general election. He is planning to hold the vote on Oct. 31, and campaigning for members of the House of Representatives is set to begin on Oct. 19. To excite voters in order to obtain a strong mandate to govern, Kishida will need to change his image as a low-key consensus builder.

As Japan's COVID-19 infections declined recently, and nearly 60 percent of Japan's population received a second shot of the COVID-19 vaccine, the new prime minister will have to first handle tasks of gradually lifting the restrictions on social and business activities and opening the border to foreign travelers.

Kishida has promised to increase middle-class incomes and reduce wealth disparity under his "new form of capitalism", which is viewed as a break from the "neoliberal policies" that the Japanese government has pursued over the past two decades.

In addition, he said that an economic package worth "tens of trillions of yen" is in preparation to help people and businesses suffering from the COVID-19 pandemic.

Kishida served as Japan's foreign minister from 2012 to 2017 and had also worked as the policy chief of the ruling LDP. He won the presidential election of the ruling LDP over his contender Taro Kono on Sept. 29, securing 257 votes over Kono's 170 votes in a runoff.

His predecessor Yoshihide Suga did not seek re-election, saying that he wanted to concentrate on fighting the COVID-19 pandemic for the rest of his tenure.

Suga's cabinet resigned en masse on Monday morning, little more than a year after its formation, making him the 12th shortest-serving prime minister in the postwar era.