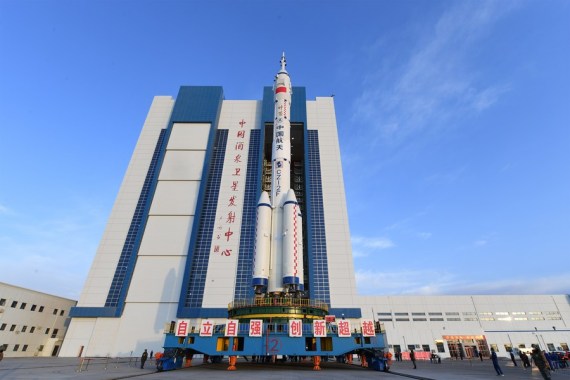 The crew of Shenzhou-13 will enter Chinas space station and stay there for six months, after a three-month mission of the Shenzhou-12 crew.

The Chinese astronauts' long-term stay in the space station and frequent interaction with the public have inspired extensive support and a vision for space exploration in the country.

The space station has started the construction stage after the core module Tianhe went into orbit on April 29, 2021. The new designs and technologies for the space station make the astronauts' lives more convenient and colorful.

The large bandwidth can support the transmission of large amounts of data to the ground, making it possible for the public to closely follow the lives and work of Chinese astronauts for the first time.

As of the end of September, the China Manned Space Agency (CMSA) has issued more than 20 video clips through its social media accounts to the public, recording the in-orbit life and work of the astronauts. It includes extravehicular activities (EVAs), physical exercise, health examinations, and watching the Tokyo Olympic games in August.

In an interview with Chinese media, the three astronauts told the audience they have several entertainment activities in their spare time, such as listening to music, playing shadow boxing, or jogging in space on a treadmill.

In front of the camera, they even showed how to play ping-pong in space by using a racket to hit the ball back and forth. The ball is fixed to the tip of an elastic stick.

China's space authorities make as much effort on the ground as in space. In the latest back-to-school season in September 2021, they organized space popularization activities in middle schools, universities, and museums to inspire future generations.

China's first space traveler, Yang Liwei, also deputy chief designer of China's manned space program, visited the Beijing No. 5 Middle School on Sept. 1 and gave students a speech during the school's opening ceremony. He encouraged them to partake in the country's space exploration and believed they could "fly higher and farther."

Yang had written an article entitled "One Day in Space" to recall his space adventure. It is included in the Chinese textbook for middle school students across the country.

On Sept. 3, the three Shenzhou-12 crew members had a live conversation with about 300 representatives of university and middle school students, teachers, and sci-tech researchers in Hong Kong SAR.

Nie Haisheng, the crew commander, showed the audience how to exercise the arms by standing upside down and using the paddle of a space bicycle.

When asked about whether they can see Hong Kong during EVAs, astronaut Liu Boming said he could see the flashing lights of Victoria Harbour and the night view of Hong Kong.

On Sept. 6, they also sent a congratulatory video clip to the students who attended the opening ceremony of the China Space Station Science and Innovation Experience Base at the China Science and Technology Museum. They invited them to provide ideas and projects for the station, such as designing a future space station, studying the shape of space potatoes, or turning hometown delicacies into space food.

The frequent exposure of China's astronauts at the space station has attracted more and more attention from the general public, who are interested in their work and lives in space. They have gained the public's recognition and support.

On China's social media platforms, like Weibo and Bilibili, pictures and videos about Chinese astronauts' space lives are popular, such as Nie Haisheng playing shadow boxing, Liu Boming writing Chinese calligraphy, and Tang Hongbo taking pictures of the moon with his mobile phone from the cabin window.

The audience finds that these brave space heroes are fascinating people in their daily work and lives.

On Bilibili, a video clip of Tang Hongbo eating an apple while working has been played over 860,000 times with more than 1,800 comments. One comment with nearly 8,900 likes says, "that's one small bite for man, one giant bite for mankind."

Another video showing Tang spinning a pen in Shenzhou-12 has been played nearly 1.6 million times. From these details, the audience sees that an astronaut is just as curious as ordinary people about the zero-gravity phenomenon in space.

Besides reading, watching, and sharing, some people have started introducing China's efforts in space exploration themselves.

The "Planetary Research Institute," an account both active on Weibo and Bilibili, issued a nine-minute video that tells the development history of China's space station. It has been played more than 1.3 million times.

"After all, the earth is just the cradle of human beings. We can't stay in the cradle forever -- the stars are our destination," says a comment after the video.