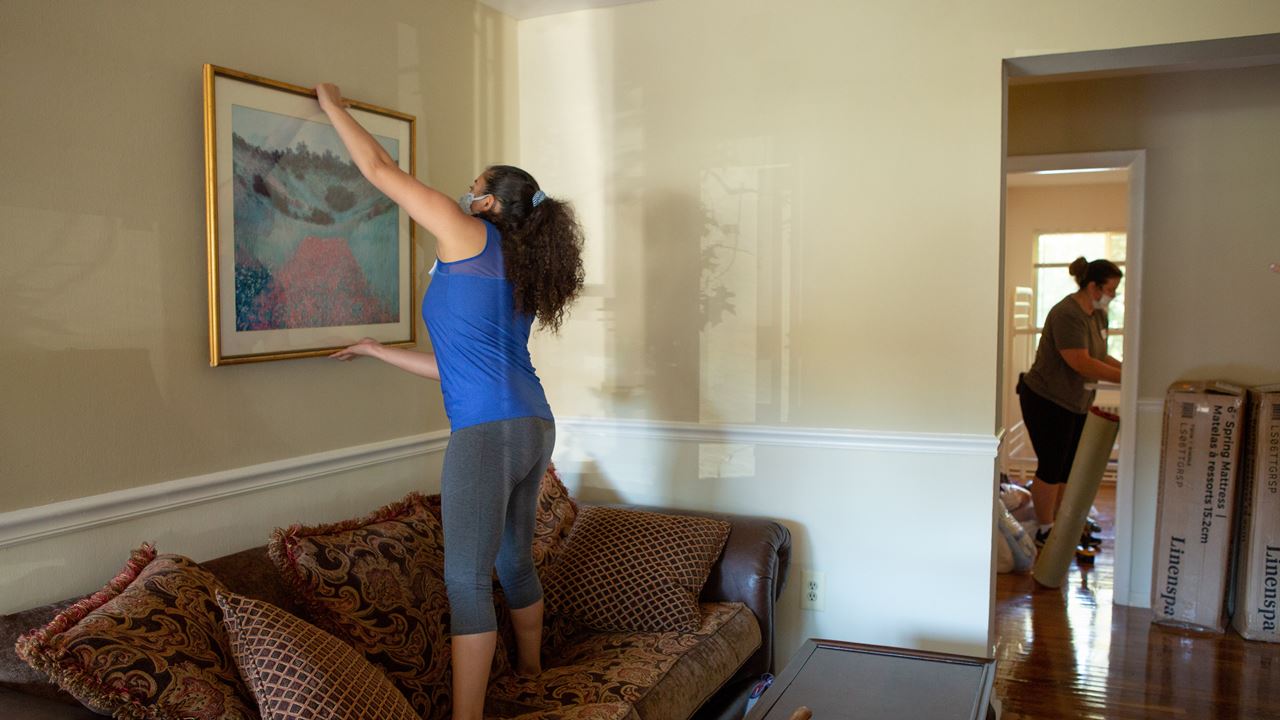 At a storage unit in Landover, Md., in late September, dozens of volunteers hustled furniture into moving trucks. Their goal was to furnish three apartments by the end of the day - two for a family of eight from Afghanistan, and the other for a family from El Salvador.

"The yellow stuff is all going to the two bedrooms and the orange stuff for the one bedroom," called out Laura Thompson Osuri, the director of Homes Not Borders, a Maryland-based nonprofit that focuses on furnishing homes for refugees resettling in the United States.

In previous years, the nonprofit would furnish about one to two homes each week, Osuri said. But since August, when the United States airlifted tens of thousands of people out of Afghanistan and began resettling many of them in the United States, it's now moving at twice that pace - at times furnishing two apartments in a single day. They've rapidly expanded their budget - hiring new staff and purchasing additional storage space - all while relying on private donations.

Thousands of Afghan evacuees have arrived in the D.C. area, where local nonprofits are moving at an accelerated rate to resettle them, in some cases with no government support. There are local offices of large resettlement agencies that have multimillion dollar contracts with the federal government to aid refugees. Then there are dozens of smaller nonprofits like Homes Not Borders that take on cases the large agencies are too busy to handle or that get referred to them by immigration attorneys or through word of mouth.

"We're picking up the slack and doing a lot of work with little staff," said Osuri, who founded Homes Not Borders in 2017. "I would definitely not say no to federal or state support. I think they definitely need to support all of us on the ground."

The State Department could not provide figures on how many Afghan evacuees have refugee status. But many of the families being brought to the United States are coming through humanitarian parole, a process that lacks a legal path to citizenship and benefits that are offered to traditional refugees. Instead, they receive limited assistance for 90 days and receive a one-time stipend of roughly $1,200.

"That's all they're getting right now," said Krish O'Mara Vignarajah, president and CEO of Lutheran Immigration and Refugee Service, one of the nine national organizations the federal government contracts with to resettle refugees. "Obviously, when you're starting over a new country with nothing but the clothes on your back, it's going to take more than that to reach self-sufficiency and successfully integrate."

Typically, refugees would receive help in the form of money, food and medical assistance, among other things, for about five years until they found a job, but with humanitarian parole status, that's not possible, according to Ruben Chandrasekar, the executive director of Maryland's chapter of the International Rescue Committee, a national organization based in New York City.

Both the smaller nonprofits and the federally funded resettlement agencies have been working on finding ways to help those families find housing, food and other needs at zero cost, so the evacuees can retain as much of the stipend as possible while searching for work.

"While we're very adept at, you know, helping our clients settle in and find work within three to four months when they start paying their bills and can meet their basic expenses, that process has to be expedited with the parolees," Chandrasekar said. "They don't have a social safety net to kind of keep them afloat . . . before the money runs out."

Many of the federally funded organizations are also having to rapidly staff up after years of cuts. During the Trump administration, the refugee admittance cap fell to historic lows. President Donald Trump initially sought to allow 15,000 refugees into the United States for 2021, which would have been the lowest since the 1980 Refugee Act. In the process, offices that helped refugees closed and vital connections with different communities were lost, Vignarajah said. While it receives federal funding, leaders at Lutheran Social Services have previously said the organization has a $1.8 million funding gap as a result of resettling 500 refugees over the past month.

The Biden administration has since increased the refugee admission goal to about 125,000 for the next fiscal year, which started Oct. 1. Since then, resettlement agencies have been working with the U.S. State Department to reopen its offices.

"Our job is more difficult in that we're ramping up significantly after hitting rock bottom," Vignarajah said.

In Maryland, the International Rescue Committee projects it will resettle 1,150 individuals just in the next six months, Chandrasekar said. By contrast, during the Trump administration, the group resettled about 200 people from the U.S. refugee program and about 50-60 asylum seekers on average each year.

"We could see a fourfold increase in our workload year over year," Chandrasekar said.

The sudden surge in need has had a "ripple effect" on other nonprofits focused on helping refugees, said Barbara Ferris, president of the International Women's Democracy Center, a D.C.-based nonprofit that relies solely on private donations. Ferris's organization has a program called Welcome Refugees that focuses on providing personalized support as refugees navigate settling in the United States. Usually, volunteers with the program focus on one family at a time, whether that's helping family members settle into a home or helping them enroll their children in school.

Since August, Ferris has had families from Afghanistan referred to her organization through immigration attorneys and other resettlement agencies who are overwhelmed. Her nonprofit has fundraised and applied to grants to increase their budget by $100,000 to meet the needs of families who fled Afghanistan, she said. But the grant process can take six to eight months.

Ferris said she was recently on a call with 55 other organizations who specialize in refugee resettlement work. Her organization is helping plan a pop-up aid center in Arlington, Va., where they will distribute clothes to women, men and children who fled Afghanistan. They also plan to distribute forms families can use to list items they need such as a lamp or a crib. Organizers will then send the form out to their networks, find the items and deliver them to the family later. Many of these needs can't wait for government support to come through, she said.

"Our goal is to get them into a stable situation as quickly as possible so that the trauma begins to decrease," Ferris said.

In the case of Homes Not Borders, it partners with some of the federally funded resettlement agencies, like the International Rescue Committee and the Ethiopian Community Development Council, to furnish homes without expense to those who arrive under humanitarian parole. However, Homes Not Borders relies mostly on private donations, Osuri said.

Recently, Osuri's nonprofit also began helping people under humanitarian parole that exist outside of the resettlement system, because they've left military bases and are staying with family in the area. They've found Homes Not Borders through word of mouth in the Afghan and refugee community.

While setting up a home in Riverdale, Md., in late September, volunteers from the nonprofit took about three to four hours to clean and furnish the two apartments for the family of eight from Afghanistan.

They assembled bunk beds, hung up wall art and cleaned some of the kitchen appliances in the apartments over a four-hour period. One of the organizations that Homes Not Borders partners with - called KindWorks - delivered fruits, vegetables and other meals to stock the fridge for the incoming family.

While Manizha Azizi, 44, helped place furniture in the apartment, she was also texting other Afghan families who had recently moved into the same apartment complex to check if they needed anything. Azizi came into the United States as a refugee from Afghanistan in 1985, after the Soviets invaded the country. She started volunteering in September, after she saw Afghans fleeing Kabul in the news.

Many of the organizations so far said they haven't had any shortages in private donations since August; rather, they've been overwhelmed with public support and have been trying to find the space to store everything.

Homes Not Borders started leasing a 2,500-square-foot storage space in July, thinking that would be enough for the next five years. But after August, they had to expand to another storage unit a few doors down to fit all the couches, kitchen appliances and other home goods they started receiving.

The International Rescue Committee branch in Maryland experienced a similar story - both its offices in Silver Spring and Baltimore received a high amount of donations, but without enough storage space for the items. They've asked people who are considering donating to check an Amazon wish list they've created, so the items can go directly to families in need immediately, rather than into storage.

Vignarajah emphasized that the process is still just gearing up - in the days to come, more families will be processed to move into the United States, and then agencies will have to work on getting people connected with jobs, setting up for English classes if needed and enrolling kids in public schools.

"This is the calm before the storm, but there's really nothing calm about it," Vignarajah said.