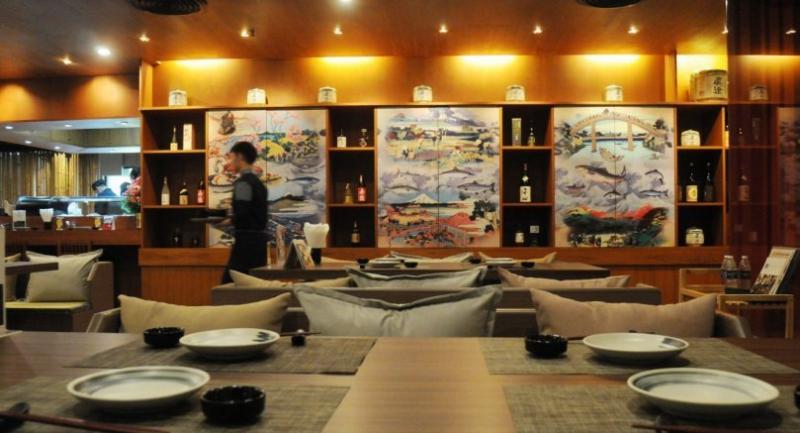 THERE’S EXTRA joy in the changing of the seasons at the recently opened restaurant Tatsumi Japanese Cuisine. The menu offers a lovely transition from winter, as represented by snow crabs, into spring – through the artful use of cherry blossoms from the homeland. Singaporean entrepreneur Jacqueline Sim has added this 60-seat destination to the family of restaurants that already included the popular Ping’s Hotpot and Ping’s Thai Teochew Seafood. They’re all on the second floor of the Pathumwan Princess Hotel.

The name Tatsumi derives from the words for “dragon” and “beauty” and implies a “dragon gate”.

The restaurant has a spacious dining area plus two private rooms, all decorated in “modern Japanese”, and a sushi bar that tempts with several Omakase set menus.

Jirayut Klamklongtan, who helps with the marketing, says Sim’s family has been in the catering business in Singapore for more than a decade. “She loves Japanese food, but it tends to be expensive in Bangkok, so she decided to open this place here where the high quality is still affordable.” In charge of the kitchen is chef Tanaka Shigeru, a 15-year veteran of the five-star Okura Hotels & Resorts chain. He was also private chef to Seiji Kojima and Kyoji Komachi when they served as Japan’s ambassadors to Thailand.

Shigeru utilises traditional Japanese cooking techniques, but his presentations are very modern. The ingredients are second to none, with the seafood – including fabulous Norwegian salmon – flown in straight from Tokyo’s Tsukiji Market.

The shift from winter’s chills to the warmth of hopeful spring is celebrated in the eight-course Seasonal Tasting Menus.

In the autumn there were delectable mushrooms, in the winter snow crab, cod roe and nanohana (rapeseed flower). With the cherry trees soon to be famously in blossom in Japan as spring arrives, dishes made with sakura will appeal. Once you take a ringside seat at the sushi bar, Shigeru will ply you with a wooden “boat” filled with five different kinds of Omakase Sashimi (Bt1,600). They include chutaro (tuna belly of medium fattiness), madai (red snapper), hamachi (yellowtail), kimedai (burned alfonsino) and that great Norwegian salmon. Until Tuesday, if you order juicy Grilled Salmon with salt or teriyaki sauce and salmon sashimi (prices ranging from Bt220 to Bt240), you also get a plate of salmon nigi sushi at no extra charge. That comprises salmon sushi, aburi and tataki.

To welcome the approach of spring and summer, Shigeru has concocted more delightful dishes. There’s Sakura Ebi Kakiage (Bt280), a tempura basket of deep-fried sakura shrimp and vegetables, and Takenoko Aigamo Kino Me Yaki (Bt350), which is slices of tender grilled duck with bamboo shoots and fresh cherry blossoms in a Japanese sauce. And the Mochi Azuki Anmitsu is chewy mochi in syrup with strawberries, red-bean puree and jelly.

There’s also a wide range of sake imported from Nagano.

>> Tatsumi Japanese Cuisine is on the second floor of the Pathumwan Princess Hotel.