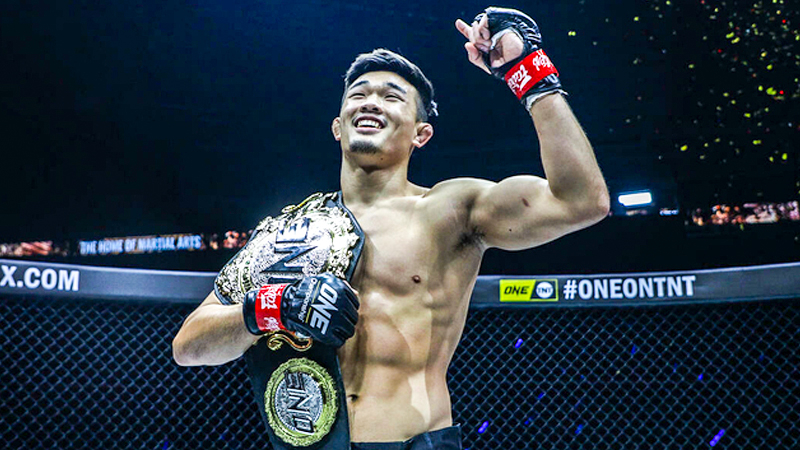 ONE Championship returned Wednesday night with “ONE on TNT II,” a previously recorded event from the Singapore Indoor Stadium. The action-packed card featured a ONE Super Series Muay Thai contest and four mixed martial arts fights, none of which reached the judges’ scorecards.

In the main event, reigning ONE Lightweight World Champion Christian “The Warrior” Lee put together another spectacular performance and finished #3-ranked lightweight contender Timofey Nastyukhin inside the first round.

Both fighters cautiously kept their distance early, showing respect for each other's finishing abilities. Lee was first to engage, throwing a quick right hand and then shooting for a double-leg takedown. However, Nastyukhin was able to read the offense and defend against it.

But as Nastyukhin pushed forward with a combination, Lee caught him on the inside with a short left hand, visibly rocking the Russian. Sensing his opponent was hurt, Lee immediately jumped on Nastyukhin and rained down a barrage of punches to the head until the referee stopped the bout.

Todd came out firing in the opening frame, operating at a furious pace while making use of her speed advantage. As the bout wore on, she grew more comfortable mixing up her strikes. Hogstad tried to use her height and length, but Todd was able to read her opponent well. In the final round, Todd folded Hogstad with a crushing body kick to the liver, which forced the referee to halt the contest.

On the Bleacher Report lead card, Yoshiki Nakahara took a victory by disqualification over ONE Warrior Series product Shinechagtga Zoltsetseg due to an illegal kick to a grounded opponent’s head in the second round. In a flyweight mixed martial arts bout, "Little Whirlwind" Wang Shuo added to his win streak, knocking out Kim Kyu Sung with a spectacular elbow in the third and final round. And in a bantamweight clash that opened the show, Shuya "Stealth" Kamikubo forced ONE Championship newcomer Mitchell "Mama's Boy" Chamale to tap out via second-round rear-naked choke.

“ONE on TNT IV” broadcasts live on Wednesday, April 28 (Thursday, April 29 in Asia). In the main event, reigning ONE Light Heavyweight World Champion Aung La “The Burmese Python” N Sang defends his strap in a trilogy fight against rival Vitaly Bigdash. For more information, visit the “ONE on TNT IV” event page.