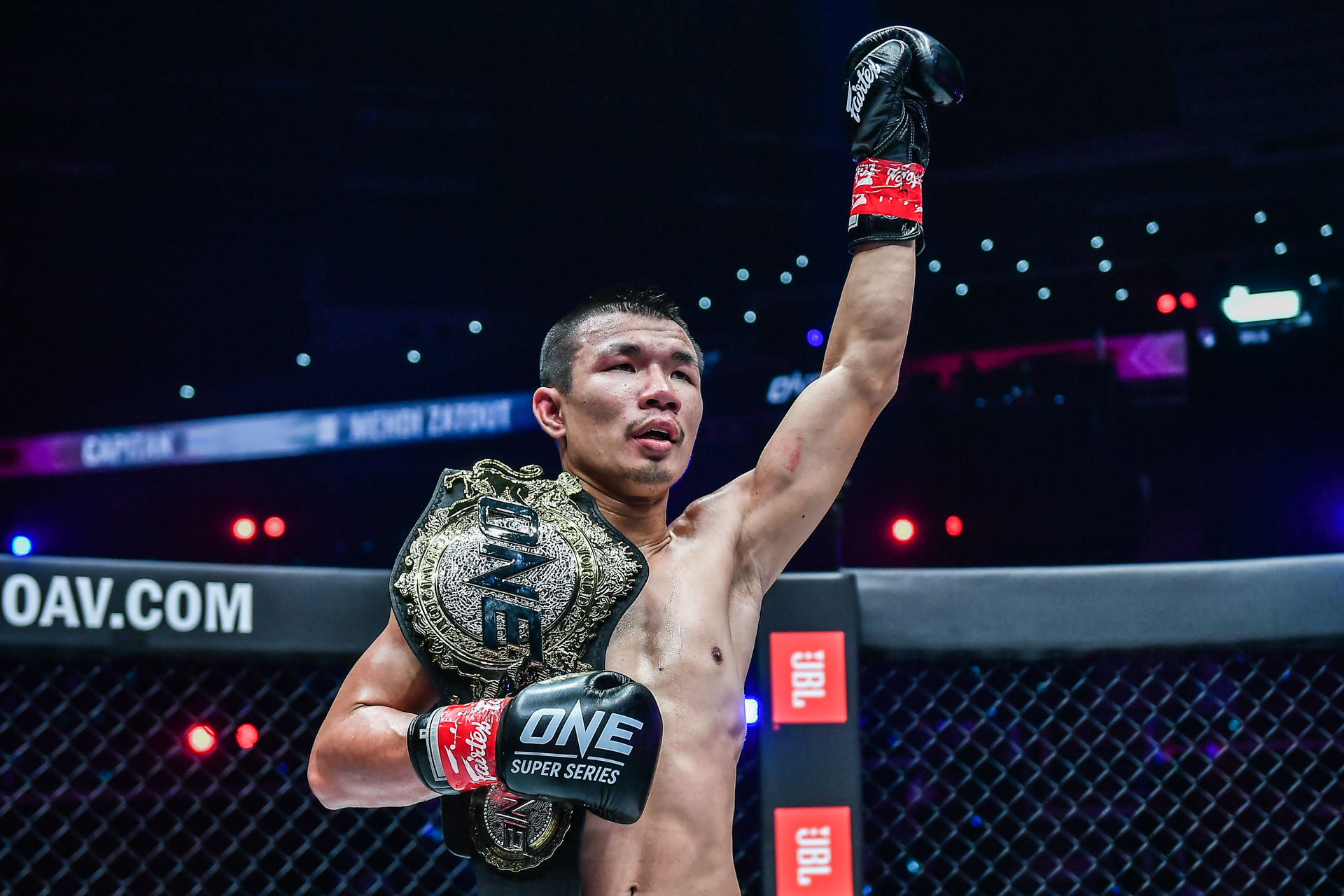 Ok came out in his usual counterpunching style. Conversely, Lee was fast, sharp, and powerful to start the bout, connecting with a plethora of right hands while scoring on takedowns. Ok weathered the early storm from the young Singaporean-American, and he got stronger as the bout wore on.

In the third round, Ok rocked Lee, sending him reeling across the Circle. A counter right hand from Lee dropped the South Korean, and toward the end of the frame, "The Warrior" took Ok's back and locked in a rear-naked choke under the chin.

The South Korean survived that submission attempt and turned it into a war for the final two rounds, with both men having their moments. In the end, all three judges scored the bout in favor of Ok to win by unanimous decision, as the new ONE Lightweight World Champion hoisted the belt up on his shoulders.

In the co-main event, reigning ONE Bantamweight Kickboxing World Champion Capitan Petchyindee Academy narrowly edged out challenger Mehdi Zatout to capture a close victory on points after five intense rounds. Capitan was sharp and aggressive, but Zatout was more than willing to engage. The two strikers tagged each other with explosive kicks and punches all throughout the fight. Capitan hurt Zatout at various junctures, which no doubt earned him credit on the scorecards. In the end, all three judges saw the bout in favor of Capitan to win by unanimous decision and retain the belt.

In the first of three World Title contests, reigning ONE Strawweight World Champion Joshua Pacio overwhelmed #1-ranked contender Yosuke Saruta with a barrage of punches to author an exhilarating first-round knockout, winning the trilogy match. The longtime rivals chose to trade strikes at the center of the Circle from the sound of the opening bell, with the Japanese fighter pushing the pace and the Filipino standout opting to counter. After Pacio hurt Saruta with a left hand, he swarmed his opponent to swiftly complete the finish and retain the gold.

Kim Jae Woong scored the biggest win of his career, stopping former two-division ONE World Champion Martin Nguyen in the first round with a concussive right hand. The two featherweight contenders met at the center of the Circle to start the contest, trading fierce combinations. Nguyen came forward aggressively, but Kim found a home for his counter right, stunning his opponent on multiple occasions. A final right hand ended the fight at the 3:15 mark. With the victory, Kim earned a crack at ONE Featherweight World Champion Thanh Le.

Russian star Anatoly Malykhin maintained his unblemished mixed martial arts record with a scintillating finish of highly regarded wrestler Amir Aliakbari. Malykhin pressured Aliakbari early, dropping and hurting the Iranian with punches in the first round. The hard-hitting Russian then closed the show with another thunderous shot to the jaw that ended matters instantly. With the victory, Malykhin earned a shot at ONE Heavyweight World Champion Arjan Bhullar.

Teenage sensation Victoria Lee moved to 3-0 as a professional mixed martial artist, earning a TKO victory behind a dominant performance over promotional newcomer Victoria Souza. The two atomweights traded strikes to open the first round, but it wasn't long until the action hit the ground, and Lee once again shined. In the second round, the 17-year-old unleashed a barrage of elbows from top position to force the stoppage.

In the headline bout of the ONE: REVOLUTION Lead Card, Team Lakay stalwart Lito Adiwang blasted fellow strawweight Hexigetu with a blitzkrieg of kicks and pummeled his opponent for three rounds to win a unanimous decision. The Filipino firecracker’s thrilling performance set the tone for an action-packed main card.

Kickboxing contender Taiki Naito overcame a knockdown in the first round to battle back and take a split-decision victory over former ONE World Champion Petchdam Petchyindee Academy in their ONE Super Series flyweight Muay Thai contest.

Petchtanong Petchfergus made a triumphant return to the Circle, dominating former ONE World Title challenger Zhang Chenglong to win a unanimous decision in a kickboxing bout.

With Demetrious Johnson in his corner, American James Yang sizzled in his professional mixed martial arts debut, defeating Roel Rosauro via technical knockout in the second round of a one-sided performance.