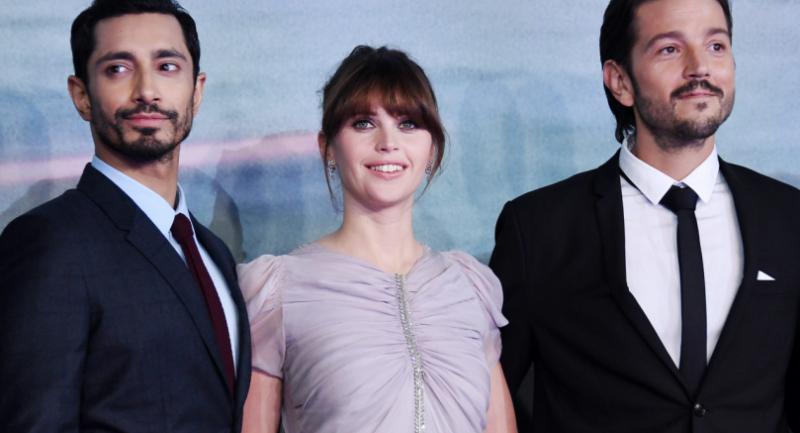 Riz Ahmed has just celebrated his 34th birthday, but with his slender physique, cut-glass cheekbones and neat, jet-black hair, the “Rogue One” star could just about pass for a teenager.

It’s hard to believe a decade has passed since the British actor emerged as one of the most interesting figures in British cinema in Michael Winterbottom’s docudrama “The Road to Guantanamo”.

A dozen movie roles in the intervening years have won him acclaim for the virtuosity of his performances and diversity of acting choices. But even he could not have predicted the stratospheric turn his career would take in 2016.

“It was a kind of a surreal, amazing moment,” the London-born son of Pakistani immigrants says as he recalls first holding that most coveted of trophies, his own “Star Wars” figure.

“I remember playing with those toys as a kid, and to be part of that universe in plastic is an amazing thing.”

Ahmed’s turn in “Rogue One” – the latest multimillion-dollar iteration of the “Star Wars” universe – comes at the end of a year in which he transformed from respected indie actor into major player.

Still basking in acclaim for 2014’s “Nightcrawler” – his first big Hollywood part – he took another step toward Tinseltown’s A-list with a key role in Paul Greengrass’s “Jason Bourne".

He cemented his fame with a starring part in the HBO crime miniseries “The Night Of” as Naz Khan, a Pakistani-American college student accused of murdering a girl on New York’s Upper West Side.

In “Rogue One,” Ahmed plays cargo pilot Bodhi Rook, a shill for the Empire who changes sides to fight for the rebels.

“It’s a ‘Star Wars’ movie, but at the same time it’s quite different,” he says during a chat at Lucasfilm’s Industrial Light and Magic special-effects studio in San Francisco.

“It feels more like a gritty, realistic war movie – dirt under fingernails, boots on the ground- – that immersive kind of feel which is exciting to me.”

Ahmed’s story – a working-class kid who won a scholarship to private school and studied politics, philosophy and economics at Oxford University – surprises those who only see the actor refracted through the roles he has played.

His breakout performance came in the role of the idealistic but murderous leader of a British jihadist cell in Chris Morris’s controversial, critically acclaimed 2010 satire “Four Lions”.

“I always look for flawed characters,” Ahmed says. “I don’t know why, but I love characters with a strong sense of regret, or feel a burning desire to put something right.”

Roles in more independent films followed alongside a sideline career as rapper “Riz MC”, in which the outspoken actor has riffed on politics, race and inequality as one half of the hip-hop outfit “Swet Shop Boys”.

The duo recently produced a track titled “T5,” which name checks Donald Trump before the chorus line: “Oh no, we’re in trouble, TSA always wanna burst my bubble/Always get a random check when I rock the stubble.”

The refrain refers to Ahmed’s frustration and anger at being racially profiled – and sometimes brutally treated – at airports in Britain and America, about which the unashamedly political performer has written and spoken extensively.

It’s not surprising Ahmed’s entry into the “Star Wars” universe has come through a part in what the trade press has described as the most overtly political movie of the franchise.

“If you look back even at the prequel movies, they’re very political,” he says. “They’re all about the UN and the end of the League of Nations and the rise of authoritarianism, fascism.”

“With timeless stories like this, or Greek mythology, stuff that we all decide we’re going to invest in as stories, you can actually project whatever meaning you want onto it.”

However, “Rogue One” has a clear message, Ahmed says – that people of different backgrounds need to come together to take on adversity.

“At a time when everyone is talking about ‘us and them’ and retreating into tribalism, it’s good to remember that we need each other to solve the big problems.”