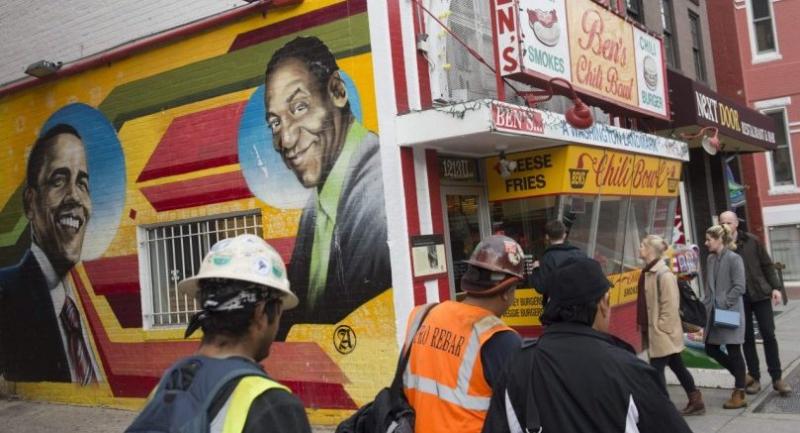 The owner of Ben

Barack Obama left the presidency just 10 days ago, but already his smiling face is gone from a mural on the wall of an iconic eatery in the US capital.

An outer wall of Ben’s Chili Bowl – famous for its chilli half-smoke sausages – on very hip U Street is now just a vast white space.

Also painted over is the face of Bill Cosby, the groundbreaking comedy legend now reviled as a suspected serial sexual predator.

Passers-by who were used to seeing those two faces on the colourful mural are doing a double-take. In its place are written the words “new year, new mural” and the address of the restaurant’s website.

“I’m shocked that they actually took it down,” says Shadarryl Brown, a 43-year-old African American.

To boot, also gone are the faces of funk guitarist and band leader Chuck Brown and a local radio DJ named Donnie Simpson.

There is nothing political about the removal, the restaurant insists. It is letting people vote on which faces go up now.

Nor is the eatery trying to dissociate itself from Cosby, who will go on trial in June, says owner Virginia Ali.

As for Obama, his departure from the White House last Friday (January 20) is just a coincidence, she insisted.

“We removed the mural because it’s been there five years. It needs to be done again. And we decided that for the new year, we should do a new mural. For the next five years,” Ali says.

“I had no idea my little wall was so important,” Ali adds with a smile.

The decision to give the wall a makeover was made last spring.

The new one will go up around April, and the idea is to let people vote on who they want to see – even Obama again, maybe, this time with wife Michelle.

Brown says it’s good that people can express their preference.

His first choice is Michael Jackson – “when he was black” – and civil rights leader Martin Luther King Jr, whose assassination in 1968 triggered riots along U Street and elsewhere in America.

People can choose from some 60 candidates, most of them black. Washington is a mainly black city, and the U Street area also used to be mainly African-American until it underwent gentrification.

Starting Thursday, people can weigh in on the future mural and suggest up to six candidates.

The restaurant is even |suggesting some combinations of famous faces. One brings together King, Mahatma Gandhi, Obama, Nelson Mandela, Mother Teresa and Desmond Tutu.

Voting will be open until late February but already thousands of people have cast their ballot, says Kamal Ali, son of the owner.

“So far Michelle and Barack Obama are leading,” he says. “They are leading overwhelmingly.”