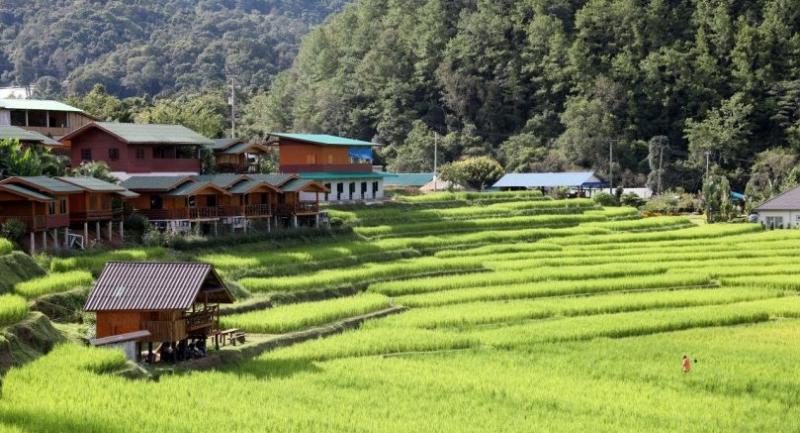 Terraced rice fields are one feature of Baan Mae Klang Luang on Doi Inthanon – the other is sturgeon-breeding farms.

BANGKOK RESIDENTS can this week again stock up on produce grown in the North by hilltribes earning income through projects initiated by His Majesty the late King Bhumibol Adulyadej.

The Royal Project Market returns to Siam Paragon for the third time from Thursday through November 30.

The mall’s Hall of Fame and Parc Paragon will be transformed into a “Food from the Earth” farmers’ market, where the focus will this year be on figs, rhubarb, peaches, strawberries, kidney beans, rice, meat and fish, and coffee and tea.

Chefs will be on hand showing visitors the best ways to prepare the foods for the healthiest outcome, as appetisers, salads, mains, desserts and drinks. The recipes they demonstrate will include Kidney Bean Rice Pancakes, Spicy Grilled Beef with Rhubarb, and Spicy Rainbow Trout Salad (with Lisu chilli dip!) Terraced rice fields are one feature of Baan Mae Klang Luang on Doi Inthanon – the other is sturgeon-breeding farms.

An exhibition will recount King Bhumibol’s Royal Project Foundation, which helps northern farmers develop crops that can thrive at high altitudes and in cold temperatures.

Switching to these more suitable crops brought an end to the slash-and-burn agriculture, deforestation and cultivation of opium that once prevailed in the area.

Hi-tech mapping visuals will trace the foundation’s history as the region was transformed. Denuded mountains and slopes carpeted with poppies gave way to the replenished forests and verdant croplands seen today. Highland brown rice is high in fibre and Vitamin B1.

“We’ve carefully selected the products for this event to showcase our success in not only producing high-quality produce for the market, but also in bringing sustainable lives to local people.”

The foundation’s book “Food for Health” will be unveiled at the market. It too is about the late monarch and his success in replacing opium cultivation with legal cash crops. It also profiles the nine products highlighted at the market and features several recipes for them. The book "Food for Health"

The Royal Project development centres present fascinating overviews of sustainable living and the means for alleviating poverty. I recently visited projects in Chiang Mai to learn how the high-quality produce is grown and raised.

Figs require painstaking effort in a climate like Thailand’s. They were first planted about 30 years ago at Royal Agricultural Station Angkhang in Fang district, the Royal Project’s original research station. The experiment failed there and fared no better on Doi Inthanon. It was just too cool for the fig trees to produce fruit.

But the temperature is warmer at the Pang Da Royal Project Development Centre in Samoeng district, and figs have been grown there for the market, though they require careful handling while they mature under roofs. Too much rain causes the roots to rot and high humidity leads to rust under the leaves. The trees are also vulnerable to insects such as the long-horned beetle, which bites a hole in the stem to lay its eggs. The holes are fatal to the trees. Figs demand a roof if they’re to be successfully nurtured.

Figs are now also grown at the Mae Sa Mai Royal Development Centre in Mae Rim district, and three varieties are being cultivated – Black Genoa, Brown Turkey and Black Mission. The Royal Projects currently produce between 300 and 1,000 kilograms of figs a week.

The book “Food for Health” explains that King Bhumibol loved eating figs, a taste he acquired as a child in Switzerland. Her Royal Highness the late Princess Mother was well aware of their healthy benefits. She once eased the pain of his aphthous ulcer with a thin slice of fresh fig over the blisters. Peaches in syrup are a top seller for the Royal Project.

More than a decade was spent finding the right kind of peach to grow in Thailand. The Amphan Angkhang grown on Doi Angkhang is named for its golden flesh. Mainly sweet with just a little tang, it’s perfect for jam and smoothies and can be cooked with syrup for a refreshing treat.

“One day His Majesty asked the Hmong what was their source of income, apart from opium,” the foundation’s chairman, His Serene Highness Prince Bhisadej Rajani recalls in the book.

“They said ‘peaches’, and told the King the income from growing opium and their small peaches was about the same. His Majesty thought that, if even a small peach could earn the same as opium and if it could be made to grow bigger and taste better, it could probably generate more income.” Rhubarb is proving trickier to adapt and is thus far grown only in two locales.

Rhubarb is grown only at the Royal Agricultural Station Angkhang and Khun Huay Haeng sub-centre. Its cultivation is so tricky and time-consuming that it hasn’t yet been encouraged elsewhere. Experimentation is ongoing. Typically, it takes a year for the stalks to become adequately fleshy. Both green and red varieties are grown and they’ve been found suitable for pies and jams as well as savoury dishes. Cherry arabica coffee is cultivated at Baan Nong Lom on the slopes of Doi Inthanon.

In 1974, hill people were urged to grow more coffee rather than opium after King Bhumibol trekked for seven kilometres to see the plantation at Baan Nong Lom, a Karen village on Doi Inthanon.

“He’d heard we planted coffee and came to visit,” says Payo Tharo, who was the headman there at the time.

“He convinced us to stop growing poppies and gave us better coffee shrubs to plant instead. Today our village produces about four tonnes of unprocessed coffee a year.”

The arabica coffee grown in the shade at Doi Inthanon is distinctive for its aroma, balanced taste and low caffeine content of just 1 or 2 per cent. It’s fared well enough in Thailand that it’s grown at 24 development centres – involving a total of 9,491 rai and 2,600 farmers, who can produce 400 to 500 tonnes unprocessed a year, and the Royal Project guarantees their prices. Shaken and bounced about as his Land Rover negotiated the North’s treacherous “disco roads”, as he jokingly called them, King Bhumibol arrived in Baan Mae Thor in Hod district 48 years ago. He prodded the local farmers to try growing red kidney beans, which would easily survive the long haul to distant urban markets.

Easy to cultivate, the kidney bean wants little more than sun and well-drained soil. The US Agricultural Research Service supplied the initial seeds, but the Royal Project subsequently developed new species that can generate two harvests a year, one of the project’s biggest success stories. Fish farming and animal husbandry are also part of the success it’s enjoyed. Rainbow trout for the table, sturgeon for the black caviar, Bresse chicken, pheasants, sheep for wool – these are all the fruits of His Majesty’s foresight and dedication.

Learn more about the Royal Project Foundation at www.RoyalProjectThailand.com.