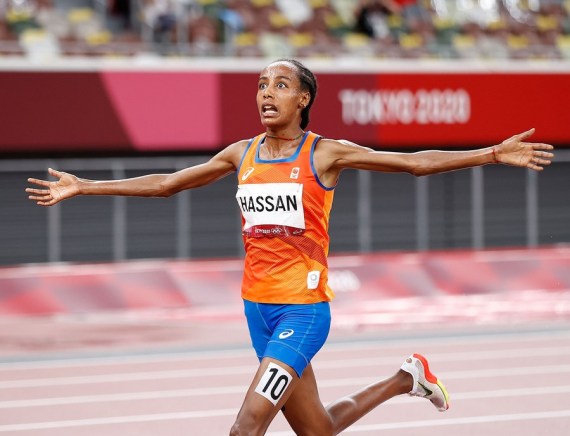 Several achievements were made on Monday as Sifan Hassan got a gold medal while Camacho-Quinn won the first athletics gold for Puerto Rico.

Sifan Hassan of the Netherlands started her Tokyo 2020 journey with an exciting victory in women's 5,000 meters race, while Puerto Rican Jasmine Camacho-Quinn delivered the first Olympic athletics gold for her country by winning the women's 100m hurdles final here on Monday.

In the morning, Hassan was tripped and fell on the ground in women's 1,500m round 1, but she got up quickly and finished the race in four minutes and 5.17 seconds, qualifying for the semifinals as the first of the heat.

Almost 12 hours later, the Dutch stood on the starting line of women's 5,000m final. The 28-year-old took the strategy of following the leading group. She remained in the mix with the lead pack with two laps to go, and began to sprint when the bell rang and took the lead in the last 200m, pulling clear to the finishing line to win with 14:36.79.

"I can't believe it. I used all my energy this morning and I was kind of tired. I couldn't believe what happened. It was terrible when I tripped, I felt terrible afterwards and I never thought I was going to be an Olympic champion," said Hassan.

Gold medalist Jasmine Camacho-Quinn of Puerto Rico reacts on the awarding ceremony of the women's 100m hurdle at the Tokyo 2020 Olympic Games in Tokyo, Japan, Aug. 2, 2021

Miltiadis Tentoglou of Greece celebrates after the Men's Long Jump Final at the Tokyo 2020 Olympic Games in Tokyo, Japan, Aug. 2, 2021.