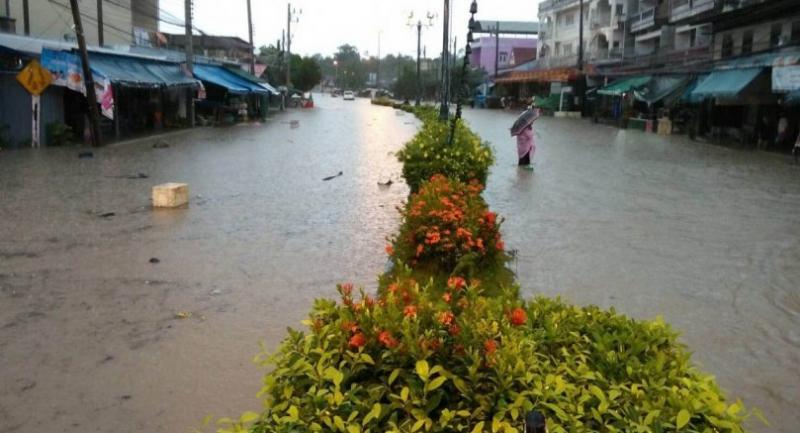 A RAILWAY section between Hat Yai and Khlong Ngae stations, as well as several tourist attractions including the Khlong Hae Floating Market in the southern province of Songkhla were closed yesterday due to a deep flood, while Trang province’s authority declared five districts as flood disaster zones.

The local railway office ordered the track section closed at noon as several parts of it were covered by water over 30 centimetres deep. The office said they would closely follow and assess the situation, which would affect several trains, including the 46th express train Padang Besar-Bangkok departing at 5pm. Trang governor Siripat Patkul also led officials to inspect flood-hit areas in Na Yong district, including a kilometre-long section of Trang-Phatthalung Road in Tambon Lamore that was under 30cm of water and was impassable for small vehicles.

Nayong Nua Market was under a 10cm- to 30cm-deep flood causing vendors at 70 shops to move goods. The five districts, plus Yan Ta Khao and Wang Wiset, had been earlier warned of floods.

In Pattani province, continuous downpours prompted the release of more water from Pattani Dam, causing the Pattani River to rise. Although it had not yet broken its banks yesterday morning, riverside residents were told to be prepared. Muddy torrents at Sai Khao Park’s waterfall in Khok Pho district prompted officials to order the removal of belongings as a precaution.

Meanwhile, about 20 homes and several roads in downstream Tambon Sai Khao were hit by a flash flood that receded as quickly as it came.

In Phetchaburi’s Muang district, floods over the past week have receded, so traffic has resumed and residents began cleaning their homes yesterday.

Phetch Dam was releasing water at the low rate of 38.21 cubic metres per second as of yesterday morning.

The only remaining flood problems were in Tambon Bang Khrok and Tambon Tha Raeng in Ban Laem district.