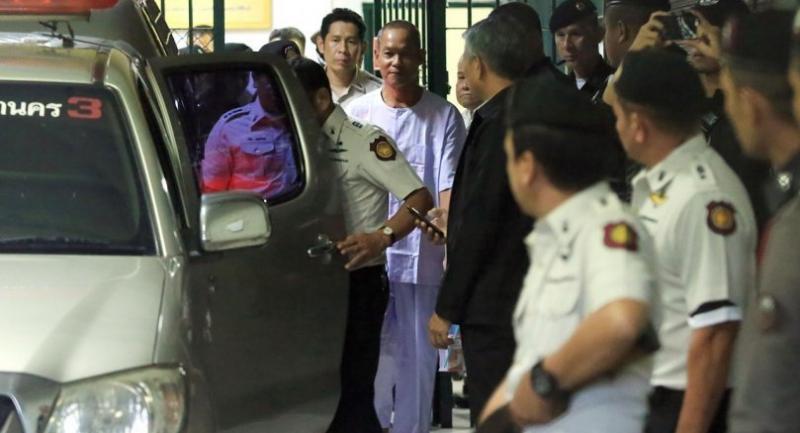 Phra Buddha Isara, who was disrobed after the Criminal Court rejected his bail request, is taken to Bangkok Remand Prison yesterday. He was arrested on charges of illegal association and lese majeste.

The monk has been charged with illegal association for his role in the People’s Democratic Reform Committee (PDRC) protests and the unauthorised use of the initials of the late HM King Bhumibol Adulyadej and HM Queen Sirikit in amulets. The Criminal Court rejected his bail request out of concerns that he might tamper with evidence. By monastic rules, Phra Buddha Isara had to disrobe because he was being sent to jail.

Policemen were armed during the operation to arrest the monk amid reports that some of the security guards at Onoi Temple had guns.

Police have pressed the illegal-association charge against Phra Buddha Isara as he allegedly mobilised some demonstrators to attack two special-branch policemen and snatched their guns during the PDRC rally in 2014. The PDRC was trying to oust the Yingluck Shinawatra-led government. Born in 1956, Phra Buddha Isara first entered monkhood at the age of 20 at a temple in Bangkok’s Klong Toei district. He later left monkhood to enter military service.

However, in 1983, he again attended the ordination ceremony. In 1989, he established the Onoi Temple on a donated plot of land in Tambon Huai Khwang, Kamphaeng Saen district, Nakhon Pathom province. Six years later, he was named its abbot. In 1999, he was appointed the monastic chief of Tambon Huai Kwang. The appointment generated some controversy regarding the number of his years in monkhood. So Phra Buddha Isara gave up the post.

Between 2013 and 2014, he joined the PDRC rallies. In 2016, he petitioned the Department of Special Investigation (DSI) to seize the assets of Phra Dhammachayo, the controversial then-abbot of Dhammakaya Temple.